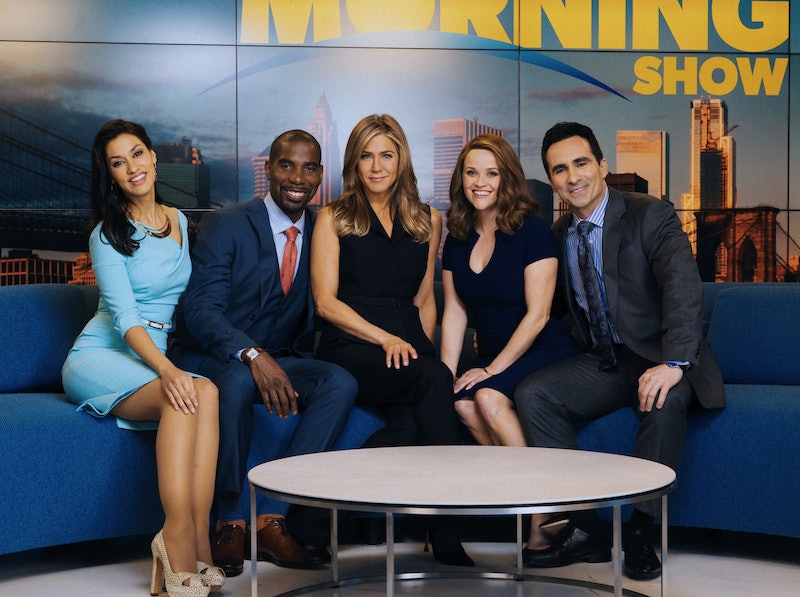 Inspired by Brian Stelter’s book Top of the Morning: Inside the Cutthroat World of Morning TV, the freshman series certainly tackled some weighty material, though to mixed critical reception. Beginning with a ripped-from-the-headlines #MeToo storyline, Carell’s once-beloved morning show co-host was fired from his job after allegations of sexual misconduct against him went public. That, of course, left his co-host of 15 years, Alex — on the verge of being fired herself amid falling ratings — to pick up the pieces.

Here’s everything else to remember before TMS Season 2 premieres on Sept. 17.

While covering a West Virginia coal mining protest, rough-around-the-edges journalist Bradley unwittingly went viral after a bystander recorded her expertly taking on a man who shoved her cameraperson. Following a heated confrontation with her boss, Bradley quit the small-time reporting gig just as TMS booker Hannah arrived to convince her to fly to New York City and appear as a guest on The Morning Show.

Alex interviewed Bradley, who held her own and didn’t show any signs of intimidation during her at-times contentious sit-down with the veteran journalist. Her performance caught Cory’s attention, and he offered her a field reporting job. But Bradley tanked her meeting with executive producer Chip and was about to leave New York when Cory called to invite her to a formal event where Alex was being honored.

Cory intentionally seated Bradley next to Alex, who was in the midst of tense contract renegotiations with UBA president Fred Micklen (Tom Irwin). Upon seeing Bradley show up at the party, Alex realized her days at TMS were numbered. Cory denied her request to approve her new co-host, and Alex threatened to quit. But while accepting her award on stage, she changed her mind and decided to publicly announce Bradley as her co-host instead. Everyone, including Bradley, was shocked. Fred tried to scold Alex in a meeting with other network executives, but she boldly took back her power and announced that from now on, they’d be doing things her way.

Under the impression that Bradley was gunning for her job, Alex grew jealous of her new co-host, who had largely won over America. Though Bradley angered some viewers when she accidentally shared on-air that she’d had an abortion at 15 years old, the candid admission ushered in a new, younger audience at the same time. Further ruffling feathers, Bradley interviewed one of Mitch’s victims and asked unvetted questions that made the network appear complicit. Bradley later went so far as to accuse Alex of covering for Mitch.

The pair continued to have a volatile relationship, but bonded while on location covering the California wildfires after Alex had a breakdown on-air. Alex shared with her co-host that she and her husband Jason had decided to go ahead with an image-damaging divorce, while Bradley confided that her father struggled with alcohol misuse and killed a child while under the influence; she was the one who turned him in to police.

Their relationship soured once again after Bradley revealed plans to interview Mitch. As a result, Alex approached Fred about firing both Bradley and Chip.

Vowing to take down the network after the New York Times broke their story about him, Mitch approached Bradley with an offer to interview him. To combat her skepticism, he offered Hannah as a witness who could corroborate his claims of a larger UCB cover-up of his sexual misconduct. Realizing Alex betrayed him, Chip agreed to help Bradley and Cory sneak Mitch into the studio and go live with an unannounced interview.

After Hannah reluctantly granted Mitch’s request to corroborate his story, the TMS head booker went into painful details about the ousted host raping her. While covering the 2017 Las Vegas shooting, Mitch invited an emotionally drained Hannah to his hotel room to watch TV. He comforted Hannah before proceeding to sexually assault her, though he claimed he believed the encounter was consensual. Upon returning to New York, Hannah reported the assault to Fred, who offered to promote her in exchange for her silence.

After dredging up the trauma with Bradley, Hannah overdosed and was found dead in her apartment the next morning.

Mitch also had a past affair with producer Mia Jordan (Karen Pittman), who confessed the humiliating mistake to the entire TMS studio. After Mia broke off their relationship, Mitch had her transferred from his team to Alex’s. It’s later revealed that the UBA investigation into Mitch began when Mia reported him to HR.

TMS meteorologist Yanko Flores (Néstor Carbonell) and junior staffer Claire began a secret interoffice relationship after meeting at Mitch’s 50th birthday party. When Hannah, still haunted by her assault, spotted them sneaking into Yanko’s dressing room, she reported them to HR out of concern for Claire. Yanko convinced Claire to join him in declaring their relationship to the company but, conflicted by the power dynamics, Claire eventually broke up with him. Following Hannah’s shocking death, however, he was the one she turned to for comfort.

In the wake of Hannah’s overdose, Bradley abruptly abandoned her plan to interview Mitch. Instead, she and Alex went off script and exposed Fred and UBA’s attempts to cover up Mitch’s sexual misconduct and toxic “boys club” workplace culture. Knowing the live feed would soon be cut off, the women spoke quickly, and Bradley encouraged more victims to come forward.

As Season 1 came to an end, a recently fired Chip — who’d leaked the story to the NYT and physically fought Mitch in his apartment building’s lobby — watched Bradley and Alex’s rogue effort play out on a big screen in Times Square. A frantic Fred cut the show’s feed in the cliffhanger, thus setting up Season 2.