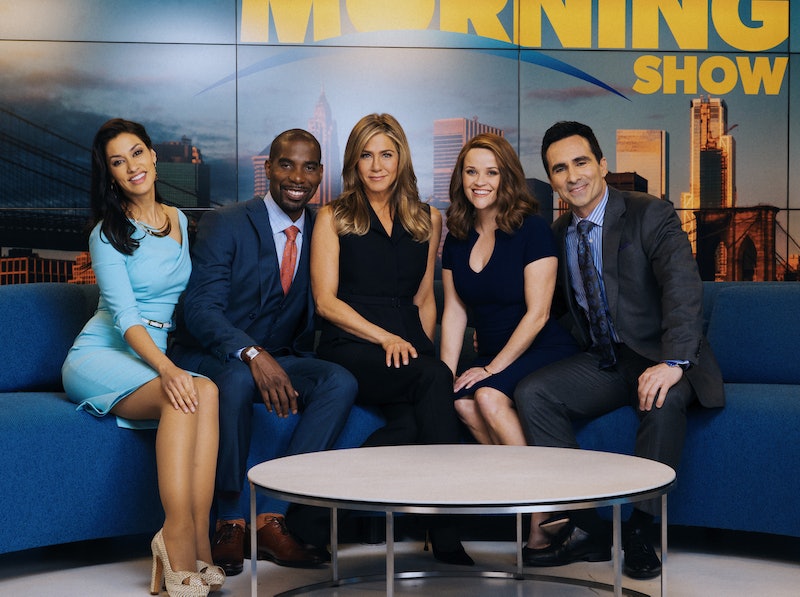 AppleTV+’s The Morning Show left viewers in a tailspin at the end of Season 1, which aired on Dec. 20, 2019, and featured an on-air bombshell from lead characters Alex (Jennifer Aniston) and Bradley (Reese Witherspoon). About a month prior to the series’s initial air date, showrunner Kerry Ehrin told Variety that Season 2 would debut around the same time the following year. “We have the shape of [Season 2]. We've broken the first three episodes,” she told the outlet during The Morning Show's red carpet premiere. “We're writing the show now; we'll film it this summer, and we'll be on next November.” Of course, Ehrin wasn’t expecting a global pandemic to delay production.

A few weeks before Ehrin's Variety interview, The Morning Show's director and executive producer Mimi Leder told IndieWire they would begin filming Season 2 in February 2020. And they did, though filming was then halted mid-March due to COVID-19 and didn’t resume until October 2020. Production was ongoing through May 2021, and on June 14, AppleTV+ released the first teaser clip for Season 2.

Production delays aren’t new for The Morning Show, which was originally greenlit in November 2017 with Jay Carson announced as showrunner, but after he left the project due to creative differences, Ehrin was brought on board... eventually. She told Vulture that she initially "turned [The Morning Show] down twice" because she "knew what [she] was getting into.” She explained, "It was launching Apple's streaming service and two huge stars and a new studio. There was a lot riding on it. So, of course, you're gonna think really long and hard about stepping into something like that." Ehrin added that just writing the pilot took an excruciating three weeks in her bedroom. "It was scary," she said. "Sometimes I was on the floor crying, but for the most part, I just kept going."

The result was an ambitious season tackling topics like #MeToo, female rivalries, workplace romances, and toxic office environments. Critics initially skewered The Morning Show's overly nuanced portrayal of Mitch, which fortunately became less sympathetic as Season 1 went on. But overarchingly, it has been described as the car crash equivalent of a show: bad (or at least not good), yet mesmerizing. Here’s everything we know about Season 2 of The Morning Show.

Season 2 of AppleTV+’s The Morning Show will pick up right where Season 1 left off, in the aftermath of Alex and Bradley’s on-air exposure of UBA’s toxic workplace culture. Per the teaser clip, longtime host Alex has decided to depart from the onscreen show altogether, leaving Bradley to deal with the blowout.

There's not yet much information about what else the second season will cover, but don't expect it to keep up with real-life politics. "My idea is that if you deal with politics, you deal with political themes," Ehrin told Variety. "I call it 'current adjacent,' where you're not historically aging yourself by dealing with a specific thing, but you can take the zeitgeist of what is happening in the world and do something with those themes."

Also serving as executive producers, Witherspoon and Aniston will reprise their starring roles in Season 2. Following a report from The Hollywood Reporter that Steve Carell would not return, Ehrin told Vulture she hopes he will, as “Mitch is part of the storytelling for the season.” In addition to appearing in the trailer, AppleTV+ has confirmed Carell is back for Season 2.

Billy Crudup, who plays the delightfully unhinged Cory Ellison, told The Hollywood Reporter that he's all-in on Season 2. "I feel like I've gotten both of my hands on the mane of a wild horse, and I'm just holding on for dear life," he said. "It's a total thrill to do, and I can't wait to see what they come up with for Cory in the next season."

This post will be updated with additional plot details as more information on The Morning Show becomes available.