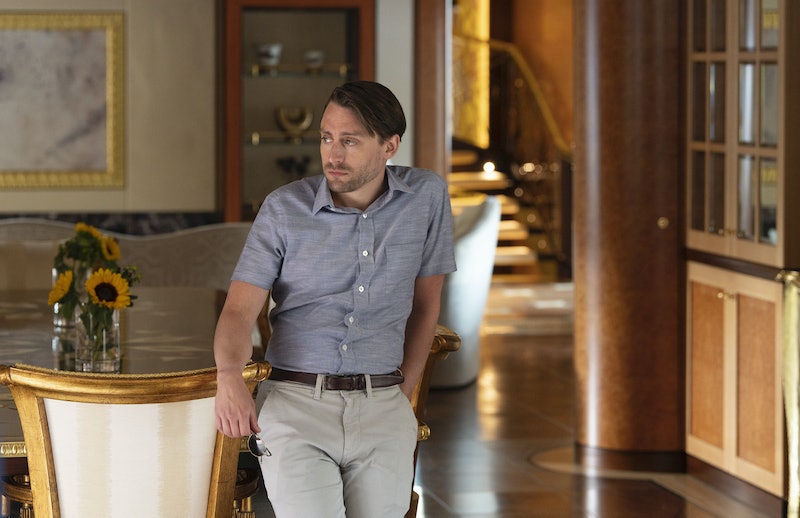 After two long years without the Roys, Succession Season 3 is finally upon us — and by this point in the show’s lore, there are a few things you can pretty much always count on. Shiv will #girlboss way too hard. Kendall will rock his browns and greiges. Connor will do something... ridiculous. And Roman will be there to comment on it all with his signature, chaotic wit.

Since Season 1, Roman has channeled his middle-child energy through his words, often in the form of biting one-liners and the kind of quick, snappy comebacks most of us only dream of hours after a conversation. But while his knack for name-calling might convey an immature vibe, Roman is definitely growing up — as he proved in the Season 2 finale, he’s totally down to provide strategic business advice, or even open up to his siblings about their relationship. As he so eloquently put it: “If we come through this, is there a thing where we, like, talk... to each other about... stuff... normally?”

Of course, he may be evolving — he even has a budding relationship with Gerri! — but don’t expect Roman to grow out of his poetic put-downs anytime soon. Fresh off his first-ever Emmy nom in 2020, Kieran Culkin is sure to deliver even more iconic Roman-isms in Season 3 of Succession. But first, here are just a few of his best, most brutal lines from the first two seasons.

You Look Like... An Actual Human Person: Season 1, Episode 1

Such is Roman’s power that even his compliments are actually pretty mean. “You look like, you know, an actual human person,” he tells Shiv as they meet for Logan’s birthday lunch in the show’s first episode. The exchange marked the first of many, many sibling squabbles between the two youngest Roys — it’s kind of their thing by this point.

He Wished Mom Gave Birth To A Can Opener, Because At Least Then It’d Be Useful: Season 1, Episode 2

When Logan is in the hospital and the family is fighting about who he’d want to be in charge, Roman isn’t afraid to cut deep. Kendall insists that Logan had said he’d have the job, in time. “He said that to be nice,” Roman says. “What I think he meant to say was that he wished Mom gave birth to a can opener, because at least then it’d be useful. ... Too far?” Yes, Roman, but when are you ever just far enough?

Kim Jong-Pop... That’s Not How Things Work In This Country: Season 1, Episode 5

Following Logan’s bold suggestion that Waystar Royco simply get into all media, Roman serves as the voice of reason — with some Roman flair, of course: “Well, Kim Jong-pop, because that’s not how things work in this country.” Kendall actually fights back at Logan himself — “You just love telling people what to think, don’t you?” — making this a miraculous Roman-Kendall assist.

Are You Not Going To Be Marrying Shiv Anymore?: Season 1, Episode 5

In a valiant effort to help make the Roys’ Thanksgiving a little less awful, Tom suggests everyone go around the table and say what they’re most thankful for. “I’m thankful that I am going to be marrying into one of the most vital, and interesting, and kind, and loving families in the world,” Tom says. Without skipping a beat, Roman airs his mock confusion: “Are you not going to be marrying Shiv anymore?”

I Don’t Feel Like I’m Gaining A Brother, Either: Season 1, Episode 10

When it comes time to welcome Tom to the family at Shiv’s wedding, Roman manages to make the new quasi-Roy feel extremely unwelcome. Again. “I don’t feel like I’m losing a sister,” he says in his toast. “I don’t feel like I’m gaining a brother, either.” It’s the kind of put-down that might have been taken in good fun by literally anyone else — but with Tom being Tom, ever on the outskirts of the Roys, you know that had to hurt.

Shiv’s new Season 2 look marked an edgy, in-charge new era for the youngest Roy sibling — one that Roman acknowledged in, well, total Roman fashion. “You got a haircut! I hate it,” he tells her at the family’s summer home. Sometimes, less is more.

Could You Maybe Get A Little Experience, At Like A CVS?: Season 2, Episode 2

Despite being very much a child of privilege himself, Roman often has fun calling out some of the more out-of-touch aspects of his siblings — and on that front, Connor is just easy bait. As Roman catches up with his big brother, he finds out that, yep, he’s still planning to run for president. “Do you think that that’s, like, a natural progression from never done nothing, never, to most important job in the world?” he asks. “Like, could you maybe get a little experience, at like a CVS?”

Nice Vest, Wambsgans ... What’s It Stuffed With, Your Hopes And Dreams?: Season 2, Episode 6

OK, Tom rocked his tech-bro down vest at Argestes — but Roman wouldn’t be Roman if he didn’t comment on the look. “Nice vest, Wambsgans, it’s so puffy,” he tells his brother-in-law, who earnestly accepts the compliment before Roman delivers Part 2: “What’s it stuffed with, your hopes and dreams?”

Are Your Nips Hard? They Must Be, Because You Are So Out In The Cold: Season 2, Episode 7

Roman always knows exactly how to get under Shiv’s skin — so when she’s being shoved around the corporate landscape in Season 2, he wastes no time dishing out one of his signature observations. “Are your nips hard?” he asks, after Logan stands her up for a meeting. “They must be, because you are so out in the cold.”

Of course, Roman’s brutal bursts of wordplay are not reserved for family alone. While recording messages for Logan’s 50th anniversary party, Roman is asked to do one take too many — and gifts the poor studio workers with a mean, cartoon-y performance. “What up, prick-licks? It’s me, Doctor Moron! I’m a ding-dong doodle-bug dipsh*t with a tit-mouse d*ck and my dad hates all of you. F*cky go bye-bye!” OK, what? Where does he come up with this?

Expect even more words to live by when Succession Season 3 premieres Oct. 17.