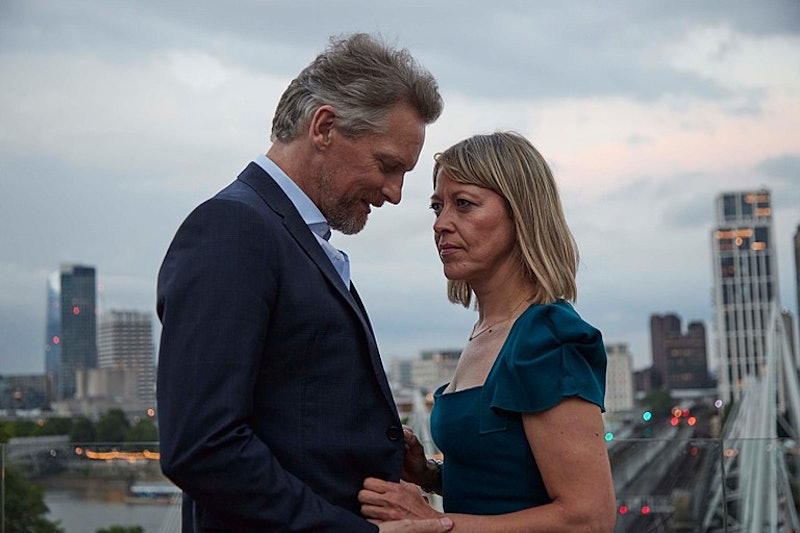 It has been long road for the Defoes, not least with the twists and turns of season 3. But with the grand finale of The Split airing on Apr. 25, series director Dee Koppang O'Leary revealed that the team grappled with how to wrap up the divorce drama in a very big way. Not only did the team weigh up different plot options, they also went as far as filming two alternative endings to pick from.

"We went around the houses with the ending a lot," Koppang O’Leary said in an interview with Radio Times. "There has been multiple endings, which is really interesting.” Eventually, they decided to go with "the ending that Abi [Morgan, the show’s creator] wrote, which is amazing, is the correct ending."

Airing for the first time in 2018, the drama centres on Hannah Stern (Nicola Walker), a divorce lawyer who has defected from her family’s own legal firm to work for a rival. As the Defoe family go head to head professionally, their personal lives also unravel behind the scenes, and the third and final season picks up as Hannah and her ex-husband Nathan (Stephen Mangan) are deep in the messy process of trying to divorce after twenty years together. So far, the third season has been packed with twists, surprise deaths, and even a cameo from the director’s IRL husband, Dermot O'Leary.

The show’s creator, Abi Morgan, previously hinted that fans might be treated to another glimpse into their creative process once the final episode has been released. “We’ve shot two endings!” she told BBC, revealing that she might consider sharing their alternative resolution with fans of the show in the future, too. (Plus, a potential spin-off series.) “There was a lot of debate and a lot of discussion, and I think we’ll end up sharing [the other ending] eventually when we’ve decided which one we’re going for!”

“The most important thing for us was to show Hannah in a place that was hopeful and powerful and that there was a level of optimism, if not anticipation and trepidation for the future,” she hinted. “We wanted to play around with it for Hannah, what would be a happy ending? And I’m always thinking about the audience, and I hope that we’re giving an ending that is both realistic and romantic.”