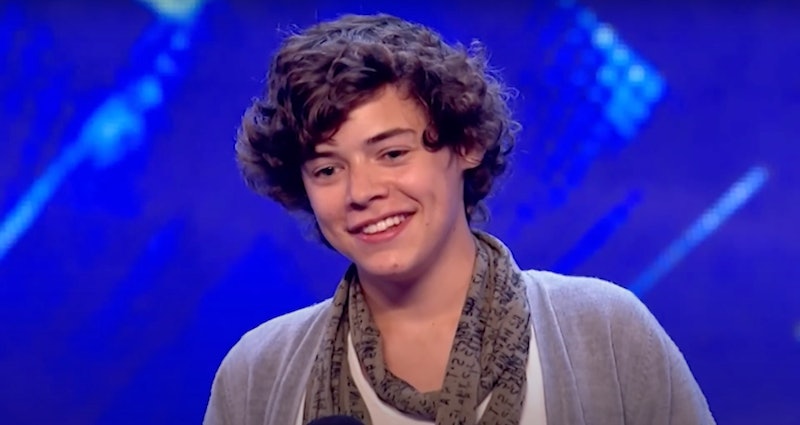 Harry Styles’ journey is not the same as it was, and nowhere is that more apparent than the moment that would eventually lead him to stardom. On Aug. 1, The X Factor UK posted an extended cut of a 16-year-old Styles’ audition for the talent show, which includes new footage and a never-before-seen performance that didn’t go quite as well as the one viewers saw back in 2010.

In the extended audition, Styles meets judges Simon Cowell, Louis Walsh, and Nicole Scherzinger, and immediately charms the audience by talking about his job at his local bakery. “I like to serve the cakes in the shop,” he said, adding, “Oooh, donuts are good.” After revealing his college plans, Styles explained why he wanted to try out for the show. “Mum's always told me I'm a good singer, and so have my friends,” he said, to which Cowell responded by pointing out that moms are biased. “Yeah, that’s what I mean,” Styles agreed. “I think I could do it, but I think with your help I could be a lot better than I am.”

After hearing Styles audition with his first song choice, Train’s “Hey, Soul Sister,” where nerves clearly got the best of him, Cowell evidently agreed that he needed their help. “I don’t know where the track’s throwing you, but can I hear something just you, without any music?” he asked. That second chance led to Styles’ acapella rendition of Stevie Wonder’s “Isn’t She Lovely,” which is the audition that viewers actually saw. From then, it was history.

As fans know, instead of getting through to the next round as a soloist, Styles was paired with Niall Horan, Zayn Malik, Liam Payne, and Louis Tomlinson to form the group famously known as One Direction. More recently, The X Factor UK shared unseen footage of the judges deliberating over auditions, where it was revealed that guest judge Scherzinger actually had a huge hand in building what would eventually become One Direction, a feat that is usually credited to Cowell.

While deciding which solo male singers to let through to the next round, Scherzinger suggested building “an imaginary boy band” to save some of the potential contestants. Immediately, she put Horan’s face to the side as a contender, and he was quickly joined by Styles and Tomlinson. “They are the cutest boy band ever,” she said. “The little girls are going to love them. They're just too talented to get rid of, they've got the right look and charisma on stage. I think they'll be really great in a boy band together. They're like little stars. You can't get rid of little stars, so you put them all together.”

Payne joined the group next, with Cowell calling him “a standout audition” and questioning if he should go through as a soloist, before Scherzinger stood firm on him being part of the band. Malik was the final piece of the puzzle, making Cowell proclaim that he wanted to mentor the groups that season, which he did. One Direction didn’t end up winning the competition, getting eliminated at third place, but they did go on to win the hearts of millions around the world.