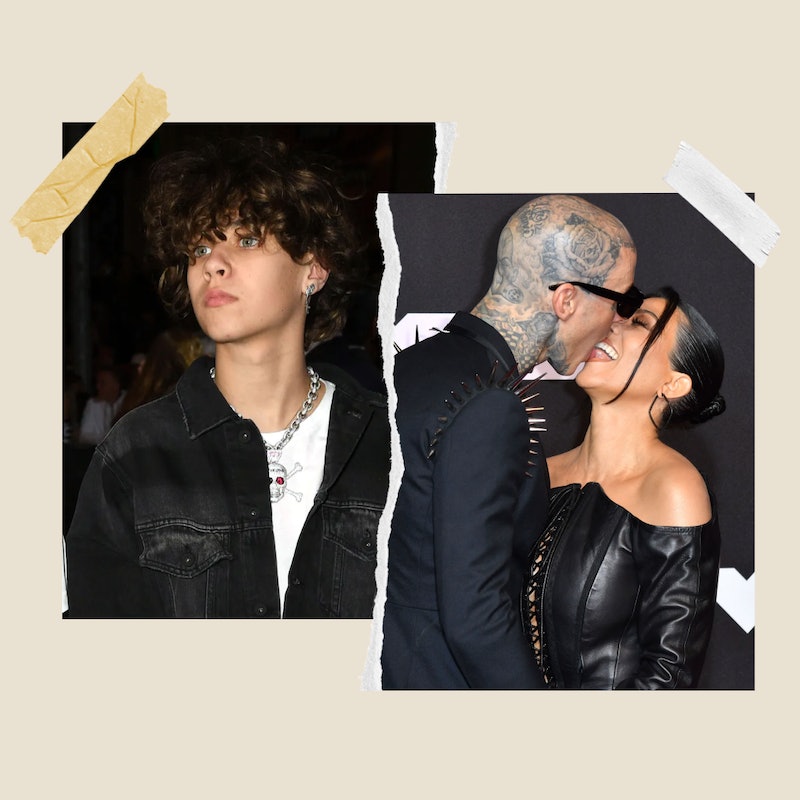 When it comes to Kourtney Kardashian and Travis Barker, forever is only the tip of the iceberg. After the couple announced their engagement on Oct. 17, their families later joined them that night for an exquisite dinner to celebrate their new relationship status. While cameramen were in attendance for the proposal and the subsequent meal — potentially for the Kardashian’s upcoming Hulu show — they weren’t the only ones filming. Travis’ son, Landon Barker, shared a TikTok video, giving a glimpse into the engagement dinner and his reaction to his father’s plan to remarry.

Set to the tune of Brian McKnight Jr.’s ballad “Marry Your Daughter,” the TikTok shows Travis and Kourtney embracing at the head of an elaborate dinner table. Red and black roses, not unlike the ones seen in their romantic engagement photos, are strewn across the table. When the embrace ends, Travis looks smitten and keeps his hand in her lap as they talk. The video then cuts over to Landon, who grins and widens his eyes excitedly at the camera before giving a thumbs-up to show his approval. On top of the footage, he wrote, “So happy for me and my new family!”

In addition to Landon, Kim Kardashian, Kris Jenner, Khloe Kardashian, Kylie Jenner, Kendall Jenner, and Simon Huck also attended and posted Instagram Stories congratulating the newly-engaged couple. Travis’ daughter, Alabama Luella Barker, also took to her own Instagram Story to voice her support and excitement: “So happy for you guys I love u both!”

Celebrities like Addison Rae, Winnie Harlow, and Lily Aldridge all joined in to share well wishes for the couple as well. Fans of the Blink-182 rocker and the “Queen of Halloween” also began to quickly share their excitement online and, as fans do, began creating memes asking if Kourtney’s ex Scott Disick was doing alright in the wake of the announcement.

Fans also speculated whether Travis and Kourtney have been were engaged since July, when Kourtney’s hairstylist Glen Oropeza seemingly hinted they had tied the knot in Vegas in an Instagram post. The couple, who initially began as close friends and neighbors before confirming their romance in January, has been very public about their love by uploading posts of themselves giving each other tattoos, taking their families to Disneyland, and exchanging kisses backstage at Saturday Night Live. Now, it’s “forever.”

More like this
Michael B. Jordan Tackled His "Public Breakup" With Lori Harvey On 'SNL'
By Brad Witter
Who Is Pete Davidson Dating? He & Chase Sui Wonders Got Caught Kissing
By Jake Viswanath
'RHOP' Stars Robyn & Juan Reportedly Got Remarried & Filmed The Ceremony
By Brad Witter
'Bachelorette' Vet Clare Crawley Revealed Her Stunning Wedding Photos
By Stephanie Topacio Long
Get Even More From Bustle — Sign Up For The Newsletter
From hair trends to relationship advice, our daily newsletter has everything you need to sound like a person who’s on TikTok, even if you aren’t.