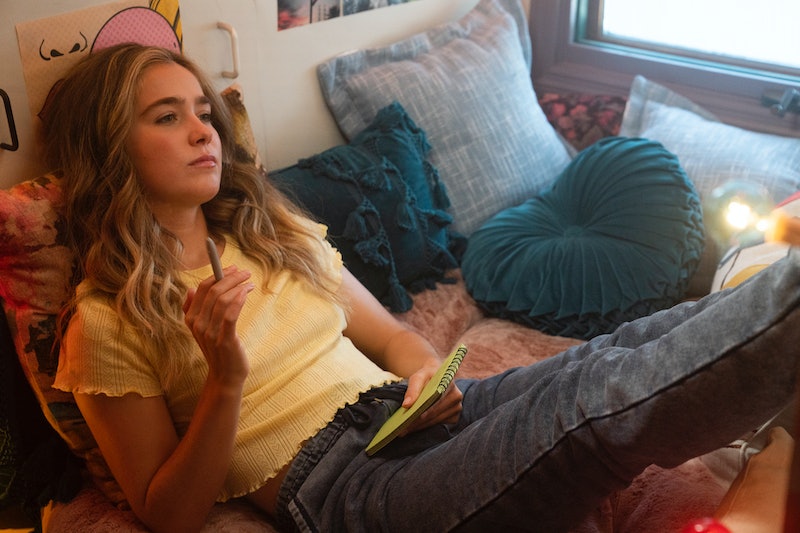 The abortion comedy Unpregnant is now available to stream on HBO Max. The film stars Haley Lu Richardson as Veronica, a high-achieving high-schooler who "never thought she’d want to fail a test — that is, until she finds herself staring at a piece of plastic with a blue plus," the film's official synopsis reads. With Veronica's college plans threatened by an unplanned pregnancy, she heads out on a 1,000 mile road trip to New Mexico to get an abortion. Along for the ride is her ex-best friend Bailey (Barbie Ferreira) who's going through her own journey of self-discovery. The movie has definite YA vibes, which might make you wonder if Unpregnant is based on a book.

The answer is kind of yes and no. In 2012, TV writer Jenni Hendriks (How I Met Your Mother) was driving home one night when she heard an NPR story about South Dakota's 72-hour abortion waiting period. As she learned more about women having to drive long distances for abortions, she thought, "How far would women have to drive to get the care they needed?" the film's press notes detail. "Who do you take on a multi-day journey to get health care?" says Hendriks. "Do you take your best friend? What if you take your worst enemy?"

In the story, Veronica and Bailey are former middle school best friends who have since drifted apart. Their reunion is for a multi-day journey from Missouri to New Mexico so Veronica can get an abortion without parental consent; a reality for many teens right now.

After hearing NPR's story, Hendriks texted her writing partner, Ted Caplan, and said she wanted to make an "abortion comedy." Caplan was on board but was a bit nervous, wondering how they'd actually make abortion funny. He told Refinery29, "The more we talked about it, the more excited we got about the challenge of tackling a topic that’s normally approached in a very serious manner. We figured if we could pull this off, how could it not be something special?"

The duo finished the first draft of their screenplay in 2012, but studios didn't bite. "We were told no one would be willing to fund it as it was too controversial," Hendriks told Book Goat. Their agents wouldn’t even send it out and told the pair to move on to other projects.

The issue just didn't seem as pressing, Hendriks thinks. Obama was still in office, and reproductive restrictions weren't at the forefront of everyone's concerns, despite the fact that individual states were issuing more restrictive laws and regulations. "But neither of us wanted to let the story go," Caplan adds.

So Hendriks and Caplan turned their screenplay into a Young Adult novel. Unpregnant was published by HarperCollins in September of 2019, and by then, the world had changed, and reproductive freedom became an issue facing a possibly dire future.

When director Rachel Lee Goldenberg came on board to help Hendriks and Caplan update their novel for a film adaptation, she did want to make some changes. As BuzzFeed reports, Goldenberg was a bit put off by the fact that Veronica's boyfriend Kevin pokes holes in his condoms in order to trap Veronica in a pregnancy so that she won't leave town for college. Goldenberg changed that plot point. In the film, Kevin neglects to tell Veronica that their condom broke.

"Purposely poking holes in a condom is literally sexual assault," Goldenberg says, adding that she wanted "a more grounded and complex version of Kevin. She can be with someone who is not the right person for her," she says. "Kevin’s incredibly insecure and is the wrong person for her, but he's not evil."

But aside from those changes, Hendriks and Caplan's story has basically made it on to the screen in the way they initially intended. Just like Veronica and Bailey, Unpregnant traveled a long road. From the initial idea to a movie script to a young adult book and back to a movie again, Hendriks says the story aims to normalize Veronica's choice.

"As someone who grew up Catholic and conservative, I probably knew about abortion before I knew what sex was," Hendriks says via HBO. "The language around it is so fraught and heavy, and growing up, I was never presented with any other version of abortion being anything but a tragedy. As I got older my opinion changed, and the desire to write a happy healing story with an abortion in it became healing to me because that was nothing I was presented with as a teenager."