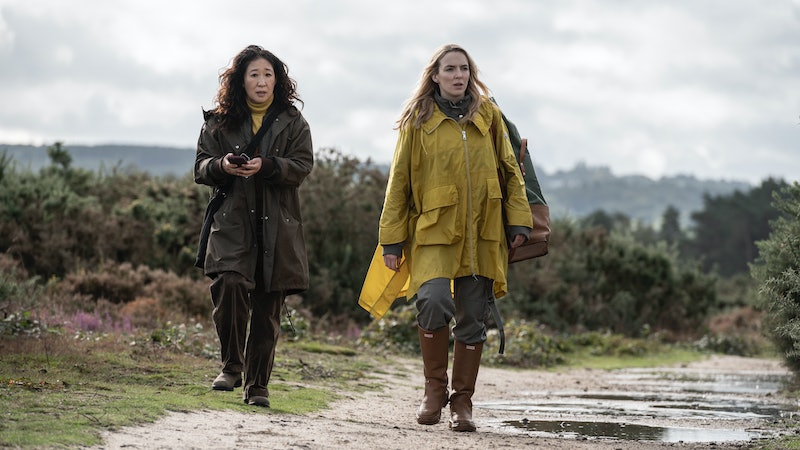 Spoilers ahead for the Killing Eve series finale. Killing Eve spent Season 4 thinning out its main cast (RIP Konstantin), and by the time it reached its series finale, there were only a few characters left. Eve (Sandra Oh), Villanelle (Jodie Comer), and Carolyn (Fiona Shaw) proved to be the only players who managed to survive four seasons worth of betrayal and European espionage, but the final moments of the BBC drama revealed one more person who didn’t make it out alive. Let’s break down that shocking death and all the twists and turns that led to it.

The penultimate episode of Killing Eve ends with Eve flat on the forest ground with a machete against her throat. She was on the verge of being murdered by Gunn (Marie-Sophie Ferdane), an assassin from The Twelve who intentionally spared Villanelle’s life while shooting her with an arrow. With the help of Konstantin (Kim Bodina), Eve tracked Villanelle and Gunn to a small Scottish isle where the two assassins were cohabitating. Unfortunately, Eve found the duo as Gunn was chasing Villanelle through the forest with said machete. But Eve managed to best Gunn, blinding her by puncturing her eyes. She then convinced Villanelle to leave with her and assist her in trying to bring down The Twelve.

With information from Hélène’s (Camille Cottin) unlocked phone, Eve and Villanelle make their way back to London to infiltrate a meeting of The Twelve. On their way, Eve finally admits to Villanelle that she’s desperately in need of her help, and Villanelle returns the favor by giving her a massive bear hug. Afterward, the duo crosses paths with another couple and spend the night in a small cabin to escape the rain. There, Eve and Villanelle do a tarot reading, where it’s revealed that Eve is marked for death and Villanelle will be guided by the sun. The two women spend the evening caressing each other’s bullet wounds before deciding to steal the camper van of the couple they’re staying with. Finally, they seem to have found harmony and put the psychological warfare behind them: They cruise through the English countryside, sharing longing kisses and blissfully eating chocolate.

Pam Rejects A Job With Carolyn

After murdering Konstantin with a pizza cutter, Pam (Anjana Vasan) fulfills his dying wish by tracking down Carolyn and telling her that Konstantin always loved her. She also giver her a letter from Konstantin that may be his confession to having killed Kenny (Sean Delaney), based on Carolyn’s reaction. Thus begins a brief friendship between Carolyn and Pam, during which the two take a cathartic float in a dirty pond. Carolyn mentors Pam for the remainder of the episode and, seeing her potential, offers her a job. However, it’s unclear if Carolyn means a job with MI6 or for something more sinister. Pam ultimately declines and walks away smiling, going off to assumedly live the happy life that Konstantin once promised her.

After their lovers road trip, Eve and Villanelle track The Twelve to a large ferry that’s being used to host a wedding ceremony. They sneak aboard with Eve posing as the wedding’s officiant, while Villanelle hunts down The Twelve. Just after doing away with an entire kitchen staff, Villanelle stumbles into the wedding ceremony, serving as an impromptu muse for Eve’s officiating speech. “Relationships are a lot of work. They require effort, and you’ll have tough times. Sometimes you’ll feel like you’re losing your way, and sometimes you’ll feel like you’re losing each other,” Eve says. “But the beauty in your relationship will be found in the ways you reunite.”

Shortly afterward, Villanelle barges into a secret meeting room of The Twelve. A montage flips back and forth between Villanelle brutally slaughtering them and Eve dancing at the reception. Once she’s finished, Villanelle makes her way to the dance floor — still covered in blood — where she’s whisked outside by Eve for another embrace.

Just as Eve and Villanelle are embracing on the ferry’s deck, a bullet rips through Villanelle’s shoulder. As more gunfire ensues, the ill-fated couple leaps from the ferry into the River Thames. Eve desperately tries to swim toward Villanelle, only to watch helplessly as she’s riddled with bullets. Bleeding out, Villanelle sinks to the bottom of the river. An exasperated Eve surfaces, screaming in heartbreak.

The final moments of the season jump back to Carolyn, stoically standing by the river. However, it remains unclear if she’s been watching the events transpire. She raises a walkie-talkie to her mouth and utters “jolly good” before waking out of frame, all but confirming that she ordered the hit on Villanelle.

Throughout the finale, it was hard to tell where Carolyn’s allegiance lied, whether it was to MI6 or to some faction of The Twelve. But one of her aforementioned conversations with Pam seemed to offer some illumination. “You don’t go back to MI6 empty-handed,” she said. “Loyalty is a dubious virtue, except when it’s to me.”

In an earlier scene between Carolyn and Eve, the former co-workers went back and forth about their predicament. “You were going to race me to it,” Eve said, referring to their dual pursuit of The Twelve. “You knew who killed Kenny, you just pretended not to so you could keep playing the game.” Carolyn admitted Eve was right, but said, “Now I’m going to behave exactly as you’d expect me to, and do something different.” Aware that she couldn’t take down The Twelve alone, Carolyn let Eve and Villanelle do it — then delivered Villanelle’s head to MI6 herself.

The series’ final moments close on a shot of the bridge where Eve and Villanelle stood in the Season 3 finale. Then, they were unable to walk away from each other. Now, they’ve been ripped apart for good.

More like this
The Song At The End Of 'The Last Of Us' Ep 1 Has A Deeper Meaning
By Sophie McEvoy
The 'New Amsterdam' Series Finale Opens An “Unexpected” Door To The Future
By Brad Witter
Netflix Shut Down 'Bridgerton' S3 Rumours About A “Very Dark” Storyline
By Bustle
Linda Ronstadt’s “Long Long Time” Plays A Pivotal Role In The Last Of Us
By Brad Witter
Get Even More From Bustle — Sign Up For The Newsletter
From hair trends to relationship advice, our daily newsletter has everything you need to sound like a person who’s on TikTok, even if you aren’t.