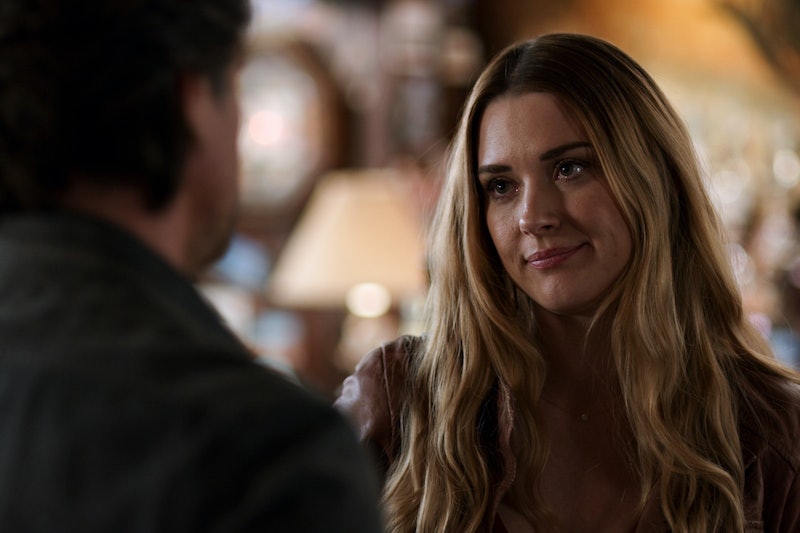 The first novel in the series, Virgin River, follows Melinda Monroe, portrayed on the show by Alexandra Breckinridge. She’s a recently widowed midwife who moves to a tiny mountain village for a fresh start. But what seems like a picture-perfect new life is disrupted by a record-scratch moment: her new home is barely habitable, and the doctor she’ll be working with is hardly welcoming. Mel’s ready to pack her things, until an abandoned newborn on her doorstep and a handsome Marine named Jack (Martin Henderson) compel her to stay in Virgin River for good.

The amount of novels Carr has published in her Virgin River is nothing short of prolific. After the first three books — Virgin River, Shelter Mountain, and Whispering Rock — came out in 2007, the beloved romance author followed them up with an additional installment in 2008 and three books and a short story in 2009. Three new books landed in stores in 2010, alongside a novella and a second short story. Carr published four Virgin River books in 2011 and four more in 2012. If you’re keeping track, that’s 18 novels, two short stories, and one novella published over the span of six years. Carr’s most recent title in the series, Return to Virgin River, came out in 2020. That’s a lot of material for the series to work with.

Below, how the Virgin River books compare to the Netflix show.

In the books, Mel lost her husband, Mark (Daniel Gillies), who passed away during a robbery-in-progress at a convenience store. He died before they were able to have the children they desperately wanted, which made it all the more poignant when a baby later showed up on Mel’s porch.

If that wasn’t tragic enough for you, you may enjoy Netflix’s version of Mel’s story, which dials up the drama in two key ways. On the show, Mel had a miscarriage, and she and Mark were in the middle of discussing whether or not they wanted to try to get pregnant again when they were involved in a car crash. Mel survived, but her husband did not.

Charmaine Plays A Bigger Role On The Show...

Although she has a substantial part in the Netflix series, Charmaine (Lauren Hammersley) isn’t a major player in Carr’s novels. She’s Jack’s ex-girlfriend, whom he dumps shortly after Mel comes into town — though she’s not overly bummed about the relationship ending. That’s pretty much where her story begins and ends in the book series.

...And Her Storyline Is A Lot More Dramatic

In Netflix’s Virgin River, Charmaine and Jack have an on-again, off-again relationship that’s complicated by her pregnancy and his romantic interest in the Mel. After learning that she’s pregnant in Season 1 — and that she’s expecting twins in Season 2 — Charmaine becomes Mel’s semi-permanent romantic rival.

As for why the Netflix series decided to write a new role for Charmaine, showrunner Sue Tenney explained to Parade that “Charmaine is dealing with unrequited love because she loves Jack, but Jack doesn’t love her. Mel and Jack want to be together, but Mel isn’t ready. So for us in writing this, having Charmaine be pregnant adds to the complications — when you are with somebody, breaking up or getting divorced is one thing, but children are forever.”

Although Jack is willing to step up and take care of the twins, some fans have theorized that Charmaine’s babies aren’t Jack’s biological children. The theory draws from a different situation found in the fifth Virgin River book, Second Chance Pass, in which another Marine, Paul, falls in love with a widow named Vanessa. Paul’s chances for a happy ending with Vanessa start to look bleak when he waits to tell her how he feels... and learns in the interim that another woman he’s slept with, Terry, is pregnant. It’s not until Terry gets cagey about a few key details that Paul realizes her baby can’t be his.

Romance readers expect books in their favorite genre to end with an HEA or HFN — that’s happily ever after or happy for now, for the uninitiated. Although Netflix decided to focus primarily on one romance in the first season of Bridgerton, and move on to other couples’ stories in later seasons — following the outline of the books, which each center on a different Bridgerton sibling’s love story — the streaming platform has taken a different approach with Virgin River. Instead of wrapping up Mel and Jack’s romance with a neat little bow in the season finale, Virgin River amped up the drama — not once, but twice.

At the end of Season 1, Mel finds out about Charmaine’s pregnancy, and Mel doesn’t take the new info well. She makes plans to leave town after Charmaine tells her that the only way Jack will choose her — and their child — over Mel is if Mel isn’t in the picture at all.

Of course, Mel and Jack patch things up over the course of Season 2 and finally consummate their relationship. It’s no HEA, however, because viewers see Jack bleeding from a gunshot wound just before the credits roll.

Virgin River on Netflix isn’t as quite as hot as Carr’s books, either. The PG-14 series isn’t Bridgerton, and much of the action on the page takes place behind closed doors on the screen. That’s not to say the show isn’t a treat — only that Carr fans looking for a steamy watch may come away disappointed by the Netflix series’ cooler, more drama-focused tone.

More like this
Nicola Coughlan Shared A Lady Whistledown Excerpt From ‘Bridgerton’ Season 3
By Grace Wehniainen, Alyssa Lapid and Sam Ramsden
Watch The Thrilling Teaser Trailer Of 'Shadow And Bone' Season 2
By Gretchen Smail and Jack Irvin
'Heartstopper' S2 Just Welcomed Four Brand New Cast Members
By Nola Ojomu and Sam Ramsden
This Episode 6 Moment Foreshadows Viserys' Fate On 'House Of The Dragon'
By Grace Wehniainen
Get Even More From Bustle — Sign Up For The Newsletter