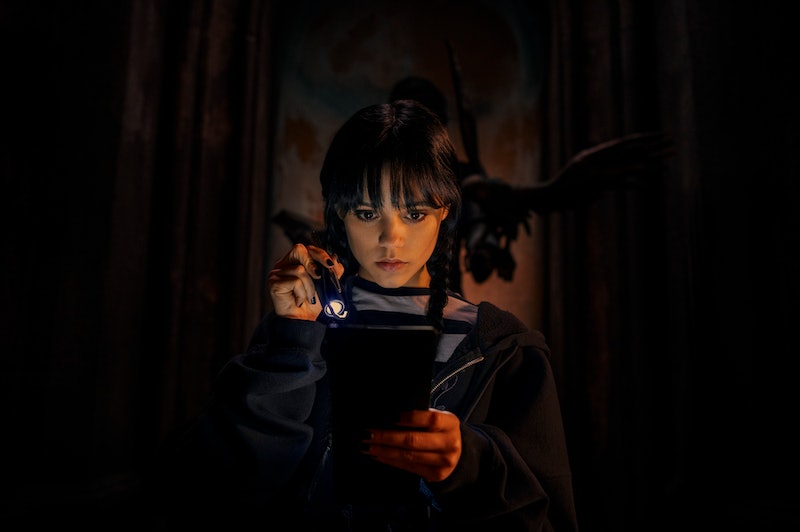 Warning: Wednesday spoilers ahead. In Netflix’s Wednesday, teen goth Wednesday Addams solves a string of bloody murders thanks to her sleuthing expertise and her sidekick, the sentient dismembered hand Thing. The series catapulted to the top of Netflix charts and turned its lead Jenna Ortega into an instant sensation.

After the titular Addams Family daughter begrudgingly settles into Nevermore Academy, a boarding school for magical misfits, she learns there’s a serial killing monster on the loose. Not to worry, she’s on the case. By Episode 7, viewers are shocked to learn that there are multiple villains in the show. The Hyde, a human that turns into a monster, turns out to be Tyler (Hunter Doohan), and his puppeteering master pulling the strings is Nevermore professor Marilyn Thornhill, aka Laurel Gates. (She’s played by Christina Ricci, the original Wednesday in the early ’90s films.)

If you’re left in shock like the rest of us and want to uncover clues you may have missed, the show definitely leaves easter eggs on the real identity of Laurel Gates. And one major clue we all missed is the black dahlia.

We first see the dark flower in Episode 1 after Ms. Thornhill welcomes Wednesday to Nevermore with a present: a potted black dahlia, an extremely rare flower she grows in her conservatory as the botany teacher. Wednesday accepts the flower, even saying that it’s named after her favorite unsolved murder.

It’s definitely not the last time the flower appears at Nevermore. In Episode 7, when Tyler takes Wednesday on a date at Joseph Crackstone’s crypt, he presents her with a single black dahlia before they enter. On Twitter, one user pointed out that the only other person who had access to it was Marilyn. “i just realized tyler gave wednesday a black dahlia flower on their crypt date. black dahlias are rare and the only person who had those flowers were marilyn she gave one to wednesday when she first arrived,” user @be_mysunrise wrote.

But further on into the date, when Tyler spooks Wednesday with her version of a horror movie, Legally Blonde, there are more black dahlias in a vase behind them. Tyler’s access to the flowers — and to Thornhill’s conservatory — was the biggest clue that they were working together.

But it’s not the first time the black dahlia should’ve given Tyler and Marilyn’s scheming away. In Episode 4, when Tyler picks up Wednesday for the Rave’N dance, he’s holding a glass box with a corsage. Though he never actually gets to give it to her because he’s rattled by the fact that Eugene and Wednesday had plans to go to the cave (his hideout), the flower in the box appears to be a black dahlia. And this flower wasn’t the only easter egg to point out Thornhill’s identity as the show’s villain.

Episode 4 is a big giveaway as to their relationship. When the young Addams introduces Marilyn to Tyler at the Rave’N dance, Marilyn says she already knows Wednesday’s date. As the town barista, Tyler implies he serves Thornhill at the cafe and drops her regular coffee order: “Double-cap, no foam, two pumps of sugar-free vanilla.” But that’s not Marilyn’s regular. She actually orders a “daily matcha latte,” which she reveals in Episode 3.

Monster and master’s interaction during the dance doesn’t end there. When Wednesday leaves to get drinks, the two continue chatting — before Thornhill disappears. A TikTok user pointed out that both of them look worried and it’s because they just found out their secret lair is compromised. Thornhill eventually torches the cave (which Eugene witnesses) and returns to the dance.

Marilyn always makes these excursions to the woods it seems, at least that’s what’s alluded to in Episode 1. When Wednesday first meets Marilyn, the teacher apologizes for her muddy red boots — curious since the Nevermore Academy is pretty much made of concrete. But since she ventures into the woods to harvest Tyler’s victims’ body parts, she tends to bring back dirt.

In fact, for a normie, the botany teacher seems to be very dark. Her choice of plants — the deadly white oleander she gives Wednesday in the finale — is already suspicious. But her lessons on carnivorous plants, particularly the ghost orchid, are allusions to her relationship with the Hyde. “Many carnivorous varieties [of plants] turn to sexual trickery or deception,” she tells her students in Episode 4, before alluding to the fact that while men are lured to pollinate the plant, in return, the man gets nothing. Kind of like Tyler.

Another easter egg that reveals Thornhill’s real identity is when she snaps twice to open the Nightshades’ secret room in Episode 3. For a normie, she knows a lot about the outcasts — including secret societies even students and alums aren’t privy to.

Finally, a clue that should’ve been a tip-off is when she hands Wednesday the Mary Shelley classic Frankenstein. An eagle-eyed TikTok user pointed out that the book was a foreshadowing of Marilyn’s own crimes. “Frankenstein is about a man who creates a monster from body parts, just like Marilyn does,” the user said. In the series, Marilyn also dismembers her victims in an attempt to magically piece them back together and resurrect the original puritanical Joseph Crackstone.

Aside from clues as to Thornhill’s, aka Laurel Gates, real identity, there are also clues sprinkled throughout the season that Tyler is not who he seemed. While waiting for Wednesday to get dressed for the Rave’N dance in Episode 4, Tyler stares at the photo of the fencing team, which is later revealed to include his mom. She, too, was a Hyde and Nevermore alum before she died.

But perhaps the biggest clues that Tyler is the killer have to do with Wednesday’s visions, which are triggered by touch. In Episode 4, Wednesday gets a vision of Eugene’s attack but only after she bumps into Tyler. Even in the first episode, Wednesday gets a vision of Rowan being murdered not after she bumps into Rowan — but as soon as she falls quite literally into Tyler’s arms.

All monster signs lead to Tyler.

More like this
'Wednesday' Star Emma Myers Thinks A Wenclair Storyline Is “Possible” In Season 2
By Alyssa Lapid
Netflix Shut Down 'Bridgerton' S3 Rumours About A “Very Dark” Storyline
By Bustle
Ashton Kutcher Wants Danny Masterson “To Be Found Innocent” In Rape Retrial
By Jake Viswanath
'The Queen’s Gambit' Season 2 Tweet Wasn’t From Anya Taylor-Joy
By Mary Kate McGrath, Jack Irvin and Grace Wehniainen
Get Even More From Bustle — Sign Up For The Newsletter
From hair trends to relationship advice, our daily newsletter has everything you need to sound like a person who’s on TikTok, even if you aren’t.