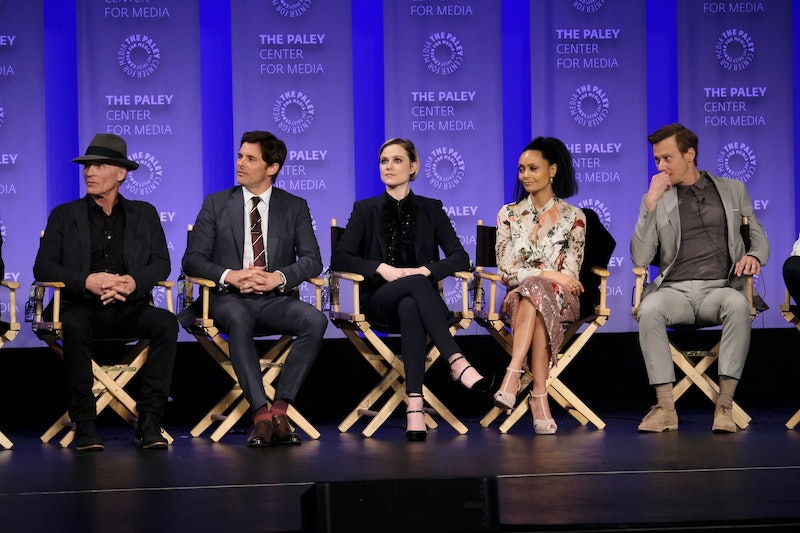 It’s not hard to see why Westworld has been drawing in hundreds of thousands of viewers throughout its run. The inventive HBO/ Warner Bros. show is a trippy, fast-paced ride that begins in a Wild West themed immersive park before exploding into a futuristic “real world” when the humanoid robots from the park break free.

Now wrapping up its fourth season, the show is bigger (and costlier) than ever. According to The Hollywood Reporter, the first season cost a total of $100 million to make — and, with Season 4’s mind-blowing special effects, breathtaking set design and some of the most confounding storytelling on TV, we are betting the fourth season has been even more extravagant.

Naturally, the all-star ensemble is taking home a significant portion of the show’s budget, too. Wondering what cast members like Ed Harris, Vincent Cassel and Evan Rachel Wood are worth since making the show’s fourth season? Here are the net worths of the cast of Westworld season 4.

What Is Vincent Cassel’s Net Worth?

As the villainous Serac, Vincent Cassel may not be playing the main character in Westworld, but according to reports, he has the highest net worth of the whole cast, largely thanks to his impressive acting CV. Over the years, the actor has appeared in both French and English films such as Black Swan, La Haine, James Bourne and Ocean’s Twelve. According to some reports, the actor was paid $783,000 for L’instinct de mort, $245,000 for Black Swan and $54,000 for A Dangerous Method. In one article in the French paper Le Monde, Wild Brunch founder Vincet Maraval criticized the French film industry for, as he saw it, overpaying actors. “How come an actor like Vincent Cassel gets paid 226,000 euros for US hit Black Swan while taking home 1.5 million euros for French movie Mesrine?” he wrote. By the sounds of things, Cassel has certainly made a huge portion of his income thanks to his work in France. As for his role in Westworld, his exact salary in unknown, but as he is not in the first tier of actors on the show, he likely makes less than $250,000 for each episode.

What Is Ed Harris’ Net Worth?

According to The Hollywood Reporter, Harris, along with Evan Rachel Wood, Jeffrey Wright, and Thandiwe Newton, the other three leads of Westworld, were given a pay rise for Season 3 of the show. He reportedly made $175,000 per episode for the first two seasons and $250,000 per episode for the third — chances are, he’s making the same or more for the show’s fourth season. This impressive salary only added to his fortune from a long acting career. With over 100 credits to his name, including The Truman Show, Appaloosa, Apollo 13 and A Beautiful Mind, to name just a few, the actor has been building up his $25 million net worth for years. However, as he told The Times, money isn’t usually his goal. “There are times when you realise you’ve got to make some money and certain films pay more than others,” he said. “Sometimes they’re interesting, other times it’s more of an ordeal. But I haven’t done that many big films. I can’t really justify myself spending my time working on something I don’t really care about.”

What Is Aaron Paul’s Net Worth?

Paul joined the cast of Westworld in the show’s third season as Caleb, an ex-soldier and criminal jobber. While Paul earned less than the $250,000 per episode that some of his cast mates received, he likely took home a six figure pay check for each episode. Plus, as a lead on the hit AMC show Breaking Bad for all five seasons, Paul had already amassed a large net worth before his time on Westworld — according to Business Insider, the actor took home $150,000 per episode. For Paul, these types of salaries didn’t come easy. After growing up in poverty, Paul started out in commercials, which paid well, before moving on to shows like ER, The X-Files and Big Love — but the actor was still struggling. “They’d squeeze all my scenes into a day, so I was making about $600 an episode.” he told The Guardian. By the time he was 27, he was considering leaving the industry as he couldn’t pay his bills. But Breaking Bad changed everything — “When the first three series landed on Netflix, my life changed,” he said.

What Is Thandiwe Newton’s Net Worth?

As a series lead, Thandiwe Newton has reportedly taking home $250,000 for each episode of Westworld since Season 3. These large pay checks add to her net worth that she’s built over the years with roles in Mission: Impossible II, Crash, The Pursuit of Happyness, ER, 2012, Line of Duty, and Solo: A Star Wars Story. Despite her hugely successful career and impressive earnings, Newton believes she hasn’t always been dealt a fair hand by a sexist industry. In fact, until Season 3 of Westworld, she and co-star Wood were paid significantly less than their male counterparts. When she finally secured equal pay, she said to Vogue, “It wasn’t a celebration. I was disgusted.” In fact, her current earnings are what she calls “compensation” for the years of sexist and racist inequality and abuse of power in the industry.

What Is James Marsden’s Net Worth?

Surprise! James Marsden’s Teddy is back in Season 4 of Westworld. As a second-tier cast member, Marsden likely makes less than $250,000 per episode. Marsden’s net worth is also thanks to his long career as a rom-com king and action star — you probably remember him from blockbusters like X-Men, Zoolander, Ally McBeal, The Notebook, Hairspray, Enchanted, 30 Rock, and Mrs. America, to name a few. While Marsden may have millions in the bank, he tries to find a balance between well-paid projects and passion projects. “It's a combination of two things for me,” he told AskMen. “Chasing good work and finding the right projects is key. One of the hardest things is saying no to the money and balancing that [project selection] with needing to pay a mortgage, deal with kids, etc.”

What Is Evan Rachel Wood’s Net Worth?

Like Newton, Wood is now earning $250,000 — the same as the male leads in Westworld. For Wood, the pay rise meant a lot. “I think I’m just now to the point where I’m getting paid the same as my male co-stars,” she told The Wrap. “I was just told that, you know, ‘Hey you’re, you’re getting equal pay.’ And I was like [gasp]. And I almost got emotional. I was like, ‘I have never been paid the same as my male counterparts … Never, never.’” Her net worth of $8 million also comes from her work in projects such as Thirteen, Across the Universe and True Blood. She has also made money from brand deals such as her 2010 collaboration with Gucci Perfume.

What Is Jeffrey Wright’s Net Worth?

Jeffrey Wright got a pay rise for Season 3 of Westworld and now earns $250,000 for each episode, which has helped him amass a net worth of $8 million. With a career spanning back to the ‘90s, his other major roles include The French Dispatch, The Batman, Shaft, Boardwalk Empire, The Hunger Games, and several voice acting roles. But becoming a multi-millionaire wasn’t straightforward for the actor. In fact, before making it big, he once scraped by with a job at the Washington Gas company. “I was making what, at the time, for me, was big money, man,” he told The Atlantic. “I don’t even remember now, but it was maybe $13.25 an hour, 50 percent more on overtime. On weekends, you triple that. I was killing it, man. And it was one of those early jobs that taught me the value of work. And when I got my check every Friday, it had sweat on it. And it felt good in my hand.”

What Is Angela Sarafyan’s Net Worth?

Angela Sarafyan’s Clementine is back in Westworld Season 4. For Sarafyan, this likely means a significant pay check for each episode. With her long acting career spanning back to 2000, Sarafyan has also earned her millions from roles in The Good Guys, The Immigrant, American Horror Story, and Breaking Dawn.

What Is Tessa Thompson’s Net Worth?

As Charlotte Hale, Tessa Thompson has become a fan favorite on Westworld, and in Season 4, her role has become more important than ever. Her current per episode salary is likely around the $100,000 mark, according to The Hollywood Reporter. Thompson has also taken home huge pay checks for major films such as Marvel’s Thor: Ragnarok, Thor: Love and Thunder, Men in Black: International, and Annihilation. Her income also comes from her production company, Viva Maude, and her various brand collaborations with the likes of Dior, Rodarte and Armani. “Campaigns allow you freedom,” she told Net-a-Porter. “For a lot of actresses, it’s the way that they make most of their money, and if you are a Black woman, occupying that space and having that sort of visibility, internationally, is huge.”

What Is Luke Hemsworth’s Net Worth?

According to Celebrity Net Worth, Hemsworth’s net worth is around $3 million. Westworld is probably his best-paid project to date, but he has also likely taken home large pay checks for his work in Young Rock and Neighbours. As the brother of Thor’s Chris Hemsworth, Luke has explained that his current wealth is all thanks to his brother. In fact, he almost quit acting at 27 because he was struggling financially. “I had been in the acting industry and did a whole bunch of stuff and never quite cracked it in the way that I needed to have a career and be able to support myself,” he told the Independent. When Chris was cast in Thor, Luke joined him on set as his personal trainer and was given a second chance at an acting career — Westworld came around soon after.

More like this
Where Is Former Bachelor Host Chris Harrison Now & What Is His Net Worth?
By Hugh McIntyre
'Grey's Anatomy's New Intern Got Advice From Dr. Bailey Herself
By Grace Wehniainen
The 'Reasonable Doubt' Cast Includes A 'Save The Last Dance' Reunion
By Grace Wehniainen
Here’s Everything Coming To & Leaving Netflix In October
By Jake Viswanath
Get Even More From Bustle — Sign Up For The Newsletter