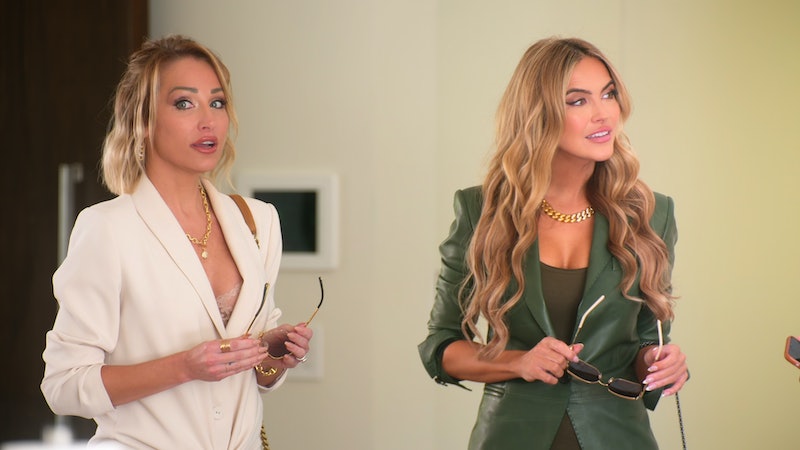 Drama seems much more riveting when set against the backdrop of multimillion dollar mansions. At least, that’s the enduring appeal of Netflix’s real estate reality series Selling Sunset. And with the promise of new agents, new ventures, and new loves in The Oppenheim Group, the show’s Nov. 24 Season 4 premiere date could not come soon enough. After spoiling fans with two back-to-back seasons in 2020, the streamer took its time before officially announcing two more seasons were greenlit on March 10. The reason for the excruciatingly long wait? Filming didn’t start until early this year, and we’ve got the lockdown to thank.

Last August, despite the series not being renewed yet, the divisive agent Christine Quinn teased potential Season 4 storylines. “Brett [Oppenheim] has left to start his own brokerage,” Christine told Glamour, adding, “The girls are fed up with the favoritism of Mary in the office. We don’t know who will move where. It may be the battle of the brokerages!” At the time, she also teased that Season 4 could be “the juiciest season ever.”

She also spoke to Entertainment Tonight about potential filming dates. “I hear that production is pushing everything until late December, if not next year,” she said. “So, I feel like this year will be good because it’s giving everyone a chance to cool off and, like, heal the wounds that have been going on since Season 3.” (Perhaps her wounds include that famous riff with Chrishell Stause.)

Meanwhile, on Good Morning Britain in September 2020, Jason Oppenheim said, “No, Season 4 hasn’t been filmed,” adding that “filming is very difficult now here in LA” due to safety measures during lockdown.

The cameras definitely didn’t start rolling until 2021. It wasn’t until early May that the cast started posting reunion pics on social media. On Instagram, an excited Heather Rae El Moussa (née Young) wrote, “Me & my GIRLS, back like we never left. It’s been so long since we’ve all been able to be in the office together but we’re back and SO happy to be reunited!!!”

Other castmates also posted from the office. Mary Fitzgerald wrote, “We’re back baby! Selling Sunset Season 4 & 5 coming to you so so sooooon!!!”

As for when filming wrapped, it can likely be pegged to around June and July, after Jason’s May 24 interview with Page Six, in which he said dating a costar “wouldn’t be an epic idea,” and before he and Chrishell became Instagram official.

The couple announced they were an item via a series of photos showing their beachside nuzzling in Capri, Italy, on July 28. So, unfortunately, their blossoming romance won’t be featured until next season. “I think Jason and Chrishell came out with their relationship in between season four and five,” Mary told Metro.

But don’t worry. There will still be plenty of opportunity for cast members, including newcomers Vanessa Villela and Emma Hernan, to stir the pot.