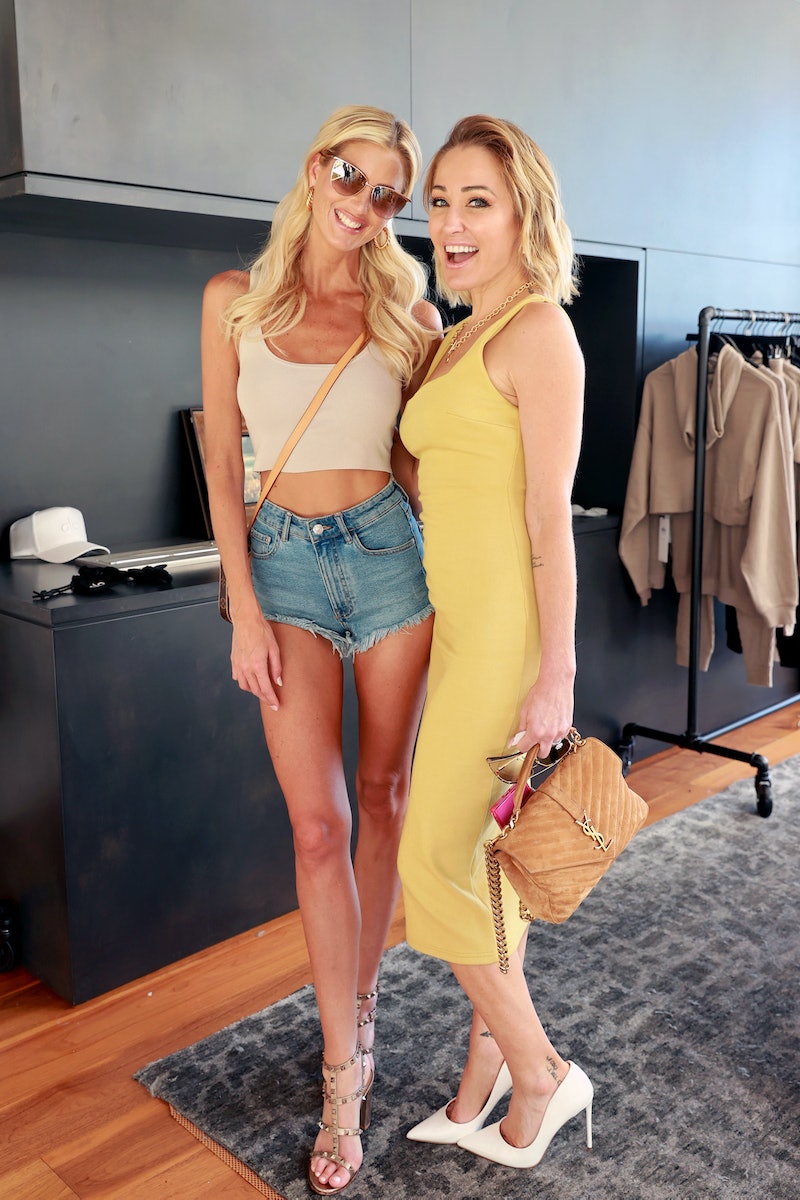 Season 4 of Selling Sunset is finally coming to Netflix on Nov. 24, and if the hit real estate reality series’ latest trailer is any indication, tons of drama — and a couple of new faces — are on the way. Returning agents include Chrishell Stause, Maya Vander, Mary Fitzgerald, and Amanza Smith, but with Davina Potratz leaving The Oppenheim Group and Christine Quinn out on maternity leave, two new agents are joining the office: Vanessa Villela and Emma Hernan. Some fans may recognize Vanessa from her decades-long acting career in over 20 Mexican television series and movies, but they’re likely meeting her fellow Oppenheim Group newcomer for the first time — aside from a few appearances on her costars’ Instagram pages.

They’ll get to know Emma quite well in the forthcoming season, as the trailer shows her taking over some of Christine’s listings — as well as her office desk — while she’s away. That’s just the tip of the iceberg on her seemingly turbulent storyline with Christine, as the clip sees the new mother allege Emma once became engaged to her ex-boyfriend a mere two months after their breakup. Just how explosive the drama will get is to be seen, but Emma recently told People she’s closest to Christine’s onscreen enemies out of everyone in the office. “I think I would probably say I'm closest with Mary and Chrishell, but that's nothing against anyone else,” she said. “I just happened to know them prior to even getting super involved in real estate.”

Here’s everything we know about Emma, including her previous jobs, real estate experience, Instagram, and more.

Emma was born and raised near Boston, Massachusetts. After working at an ice cream shop and as a babysitter, per Nylon, she moved to Los Angeles as a teenager to pursue a career in modeling. While navigating the industry, she became interested in the stock market and started investing “at a really young age,” she recently told People. It proved to be a successful hobby, as she gained a substantial income and wanted to use it wisely. “With any successful run in the stock market, you tend to kind of fall into real estate,” she said. “I bought my first property with Jason [Oppenheim in 2017], and that's how I transitioned into real estate.”

Jason then urged her to obtain a real estate license, which she did the following year before becoming an agent for The Oppenheim Group in 2018. Yes, you read that correctly — she’s worked for the agency for three years, but Season 4 will mark her first time appearing on Selling Sunset.

Aside from real estate, Emma owns a plant-based frozen food company called Emma Leigh & Co, known for its empanadas made with Beyond Meat. “Being in the food industry is a huge part of my story and also transitioning into real estate,” she told People. “A lot of the ties that I made from that — and from being a woman CEO and a woman entrepreneur — mean I've met other CEOs who are now purchasing homes. So you'll see it unfold [on screen], but it makes a big difference, me coming on and having that entrepreneurial background, for sure.”

Partially thanks to her past in modeling and appearances on other Selling Sunset cast members’ photos, Emma’s Instagram account boasts nearly a million followers. Her bio notes that she’s the CEO of Emma Leigh & Co, a cast member on Selling Sunset, an “Angel investor,” and an agent at The Oppenheim Group. Emma often posts glamorous OOTDs, smiling photos with friends including Chrishell, Mary, and Amanza, and snaps with her dog, an Akita mix named Benny. Additionally, she documents vacations, beach days, and nights out on the town and occasionally posts photos of her real estate listings.

Onscreen drama may arise, but Emma is ready to join the world of reality television and told People she’s felt that way since her first day of filming. “I wasn't nervous when the cameras were there because I think I am so comfortable in real estate,” she said. “I'm so comfortable with Jason and everyone already.”

That said, she has nerves over any potential bullying to come her way once viewers watch Season 4. “I think it's really difficult in general for any person to kind of see negative criticism come at you. But of course, as a woman, even more so. I've seen a lot of the girls struggle with the feedback and criticism they've gotten.”

Emma also said she’s chatted with the other Oppenheim Group agents about what to expect and how to handle any hardships. “They’ve warned me, and they’re super protective of me, which I love. They're like, ‘Don't read the comments. They might not always be the best,’” she detailed. “But, you know what? It’s been really inspiring for me when I’m out and about with them and people will come up and say, ‘You inspire me,’ and things like that — that’s why I want to do it. So that I can inspire young people the same way that a lot of my coworkers do as well.”

More like this
'The Queen’s Gambit' Season 2 Tweet Wasn’t From Anya Taylor-Joy
By Mary Kate McGrath, Jack Irvin and Grace Wehniainen
'Bling Empire: New York' Star Nam Laks Is The “Blair Waldorf Of Thailand”
By Alyssa Lapid
Blake Abbie Was In A 'Boys Over Flowers' Reboot Before 'Bling Empire: New York'
By Alyssa Lapid
Everything To Know About 'RHONY' Season 14
By Jake Viswanath, Alyssa Lapid and Brad Witter
Get Even More From Bustle — Sign Up For The Newsletter
From hair trends to relationship advice, our daily newsletter has everything you need to sound like a person who’s on TikTok, even if you aren’t.