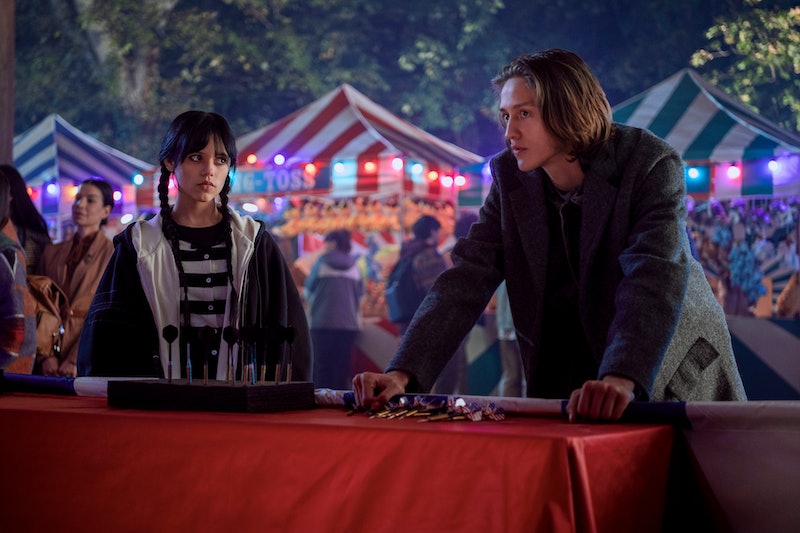 Major spoilers for Wednesday Season 1 ahead. The question of who Wednesday ends up with on her new Netflix series may be somewhat moot by the end of Season 1. Both Tyler and Xavier were interested in the eponymous teen sleuth, but Tyler is in custody after being revealed as a Hyde, the monster behind the local killings — and Xavier gets Wednesday a phone to text him on, but she’s not necessarily letting her guard down just yet.

However, there’s every reason to hope for a Wednesday Season 2 (see: those viewership numbers), which means the budding love triangle may continue to be an issue for Wednesday’s future. Jenna Ortega, the actor who plays her, hopes not, though.

In an interview with Etalk, Ortega first said she “had to accept” Wednesday’s relationship drama with the two boys — before changing her tune. “Well, no, honestly, I’m gonna fight this love triangle thing so hard,” she said. “Because it’s just me being protective. Because I don’t think Wednesday would ever be in a love triangle. And I talked to the writers about this, and they said, ‘Don’t worry, don’t worry. It’s not gonna be that, it’s not gonna be that.’”

Ortega added that it was “important” that any perceived relationship dynamics were “strictly out of pleasure, or amusement, rather than severe interest or being boy-crazy in some sense. Because honestly, I think boys are probably the last thing on Wednesday’s mind.”

Ortega also told MTV News that she’s “always been against the love triangle idea,” but she still sees a positive dynamic ahead for Wednesday and Xavier. “I think there’s an opportunity there for a really sweet platonic relationship,” she said. “Because I don’t think it’s shown often enough: men and women having safe, platonic relationships that don’t become romantic and are just genuine, almost sibling-like relationships.”

That does seem to track with what we know about the character, of course. Among Wednesday’s best quotes on the topic? “It’s not my fault I can’t interpret your emotional Morse code,” a reference to her frustration with relationship signals. She also worries about being “a classic example of female objectification for the male gaze” at the school dance.

While she opposes the love triangle, Ortega seems to be open to another relationship altogether: Wednesday and Enid. In the MTV interview, she praised the pair’s “sweet little relationship.” And PRIDE’s Stacy Yvonne reported that Ortega was into the ship at a recent press event. “She was like, ‘In a perfect world, we would have been, like, a thing,’” Yvonne recalled. “‘A little, winky thing.’”

When this was relayed to Emma Myers, who plays Enid, she seemed to agree. “I always say, ‘And they were roommates,’” Myers said, referencing the popular Vine that is sometimes used in a shipping context.