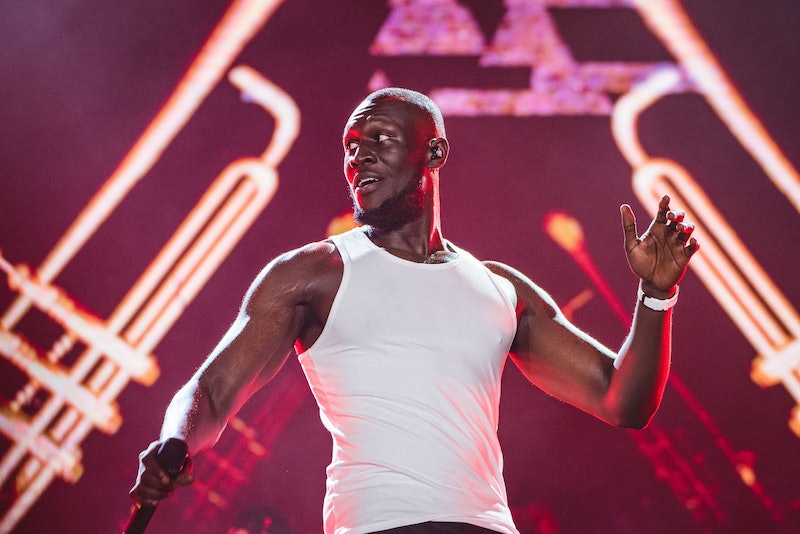 Following a string of successful albums, and an outspoken approach to various social and political issues, British rap superstar Stormzy has emerged as a leading voice in the world of music. The "Vossi Bop" performer is now remembered as one of Glastonbury’s greatest headliners in recent history, and has a trophy cabinet packed out with some of the most prestigious gongs in music. But what else is there to know about grime's biggest star? And who is Stormzy dating in 2022?

At the moment, it doesn’t look like the rapper is dating anyone. Stormzy split from his long-term girlfriend, TV presenter Maya Jama, back in 2019. The pair first met in late 2014, and just a few months later, made it official in January 2015 — however, after more than five years together, Stormzy and Jama called it quits in August that year. The rapper addressed the breakup in his song "Lessons," which was featured on the track-list of his most recent album Heavy Is The Head.

During an interview with Charlamagne Tha God on YouTube following their split, Stormzy also opened up about his previous relationship with Jama, describing the presenter as "the star girl" and "an amazing woman." When pressed about the possibility of a reconciliation between the two, the "Big for Your Boots" performer also admitted that he "would love for that to happen" — and revealed that, at some point down the line, would love to "marry her" and "have her children."

Last year, Stormzy and Jama reportedly caught up at GQ’s Men of the Year After-Party, and seemed to be on good terms: “Stormzy and Maya clearly still get on like a house on fire,” an onlooker told The Sun. It was purely a friendly chat, and Jama is now engaged to the basketball player Ben Simmons.

And though speculation has linked him with Love Island’s Amber Gill since – with the former Islander spotted watching Stormzy headlining Leeds Festival from side-stage last year – the rapper’s team swiftly clarified to The Mirror that “Amber’s access had absolutely nothing to do with [Stormzy].” The publication has also linked him to Victoria’s Secret model Yasmine Aisha Khalifa Holmgren, whom he reportedly met after a gig in Stockholm.

In 2020, Stormzy deleted all his social media accounts. Of the decision to do so, he told Leaving Vibe Radio on Apple Music that “We done a show and I came off stage and I remember one of my first feelings was getting the clip of us to put on social media but I didn't have social media. I remember it being a weird feeling. Because that's what I would normally do anytime I've done something great, I'm gonna show everyone. And I remember thinking in that moment, 'That's ego, that's ego. That's probably validation.”

Stormzy also went on to say that another part of it was that he felt there was just too much “noise” in his life, stemming from social media. "I'll just make active decisions to not be around noise. Because I feel that noise doesn't allow me to be normal. Because if I consume noise and energy all the time there's something that's not normal about that. So I think there's a degree of separation that's needed."

More like this
It’s Official: The UK Is Hosting Eurovision 2023
By Sam Ramsden and Rachel Mantock
Beyoncé Might Be Plotting Secret Intimate Gigs In The UK
By El Hunt
60 Empowering 'Renaissance' Lyrics That Make Perfect Instagram Captions
By Catharina Cheung
The Beyhive Is Buzzing About Beyoncé’s 'Renaissance' Album
By Sam Ramsden
Get The Very Best Of Bustle/UK

This article was originally published on Feb. 18, 2020