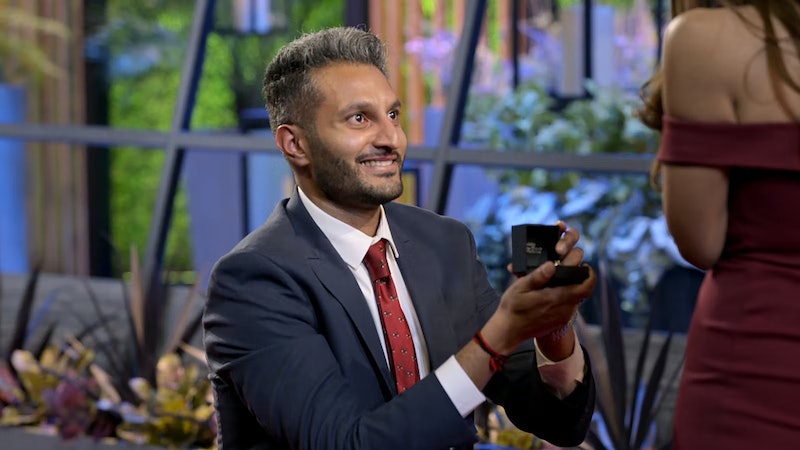 It’s a tale as old as time. Strangers join a dating competition, fall blissfully in love on national TV, get engaged, break up, and shade each other on social media. Such is the case for Love is Blind’s Abhishek “Shake” Chatterjee. Shake and his TV match, Deepti Vempati, have recently been mired in drama after they called off their engagement, mostly thanks to Shake’s comments about Deepti during and after Season 2 of the reality show. They’re both dating other people now — Deepti is rumored to be dating co-star Kyle Abrams while Shake made his new relationship Instagram official on March 17 — but it seems he can’t keep her name out of his mouth.

Though the two got engaged on the show, Shake was constantly on the fence about his relationship with Deepti, causing her to break up with him on their wedding day. Calling the wedding off, she told him, “I deserve somebody who knows for sure.”

Shake also commented on Deepti’s physical appearance behind her back throughout the season, telling his family and castmates that he wasn’t sexually attracted to her. He even likened being with Deepti to being with his “aunt,” making him the standout villain of the season.

Since the show aired, many viewers have condemned his remarks on Deepti’s looks. Her family also got involved, with her brother Sunny calling Shake a “loser” in a statement posted on Instagram on Feb. 27.

Since then, Shake has been flitting between being apologetic online and showing no signs of maturing. On March 1, he posted a video saying he wasn’t sorry for what he did on the show. In the clip, he said, “I’m not sorry. I think I handled the situation as best as anybody in my situation could. And at the end of the day, I’m going to live my best life going forward. And you don’t have to like me. Only I have to like me, thankfully.”

Shake backpedaled days later when he apologized to Deepti via another Instagram video posted on March 8. Calling her a “woman that I know I hurt,” he said, “Deepti, I am truly sorry for some of the things I said that, honestly, just could’ve been left unsaid.” Responding to his apology, Deepti told the Daily Mail on March 11 that Shake’s apology was “fake” and “too late.”

A week later, Shake seemingly shaded Deepti with another Instagram post — this time in one announcing his new relationship. Posting photos and clips with his new partner, Emily Wilson, Shake added, “Good things come to those who w̶a̶i̶t̶ don’t settle.”

The following day, Emily also posted photos of them on her account. Sharing a few pictures with Shake, she captioned it, “love is blurry.” Shake also prominently features on her social media with a dedicated Instagram Highlights compilation of their dates and outings. Plus, he’s tagged in her bio. “My +1 @thepuppydoc,” it reads.

Though Shake seems to be happily in love, days later, he doubled down on the remarks he previously made about Deepti’s appearance. Page Six reported that in a March 23 Instagram live interview with radio show host Domenick Nati, Shake repeated how he “wasn’t attracted enough to make that commitment to her [Deepti].” Shake even claimed she’s “playing the victim,” saying, “I’m like, hurt, that she’s playing up this victim thing so hard when we had so much fun, and I took [such] good care of her.”