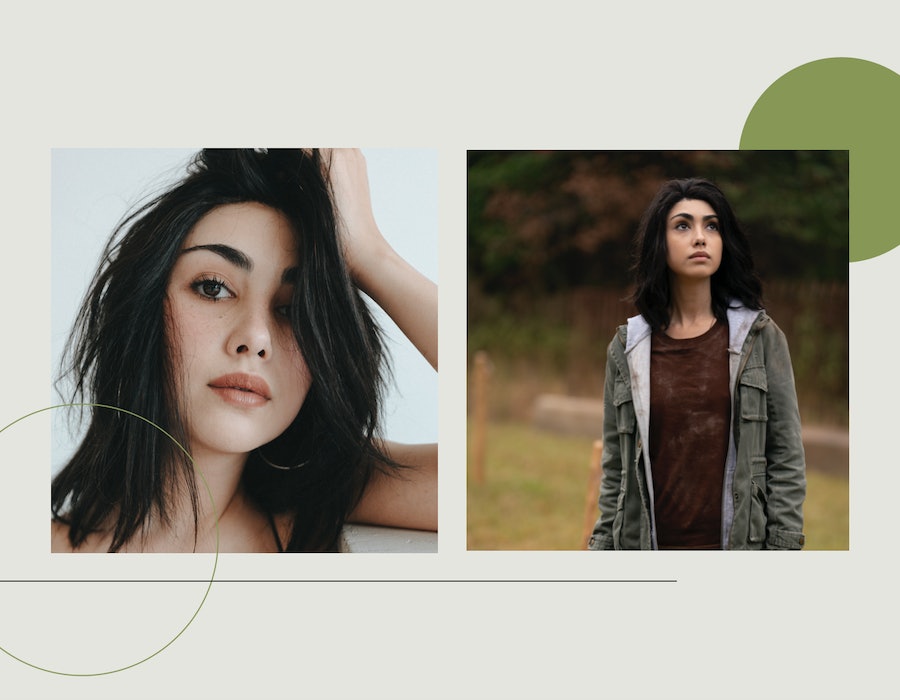 Moments into AMC's new Walking Dead spinoff World Beyond, Hope is caught flipping off an authority figure and graffitiing "Civic Republic Sucks Ass" across a poster. It's a fitting introduction to the character, a rebellious and cynical teen growing up amid a zombie apocalypse. She also "couldn't be more different than who I actually am as a person," says star Alexa Mansour, who plays her.

Embodying Hope proved to be a cathartic and confidence-boosting experience for Mansour, who is making her debut as a series regular following episodic roles in Law and Order: SVU, How to Get Away with Murder, and Madam Secretary. As a biracial Latinx and Egyptian American actor, Mansour was often told she didn't look ethnic enough for a role or was expected to play a stereotype. "Every job I had gotten where I was a Middle Eastern girl, I always had an accent," the 24-year-old actor says. "[Or] it was always, 'Oh she's really good, but she just doesn't look the part.' So I had a hard time figuring out what kind of character I was supposed to play and what kind of actor I was for a really long time."

These barriers led to feelings of inadequacy, which in turn fueled Mansour's music, her other creative endeavor. (She released "Can't Stop Myself," the first single from her upcoming EP, last month). "I am always trying to set these super high standards [for myself], which people shouldn't even try to meet because it's not healthy for anyone to be thinking that way," Mansour says.

Becoming the lead in one of TV's largest franchises — and beating out over 1,000 other hopefuls for the role — was a much needed affirmation for Mansour. "It was like night and day when I got the [World Beyond] job. It was proving to myself that I could actually do it," she says. "I was like, 'OK, this is why you didn't quit. This is why you kept going, audition after audition after audition."

And unlike many of Mansour's previous roles, Hope is a character whose race is only incidental to her story. "It's a big relief, in a way, that I'm playing just a girl," Mansour says. "We don't know what race she is. We don't know where she's from. She could be absolutely anything, but [ultimately] she's just a teenage girl."

Whereas The Walking Dead opens shortly after the zombie apocalypse breaks out, World Beyond follows two sisters coming of age 10 years later. Hope and her sister Iris (Aliyah Royale) live in the Campus Colony, a satellite outpost of the larger (and much more sinister) Civic Republic Military (CRM). Though Hope lives in relative safety behind their walls, she's consistently unhappy, both haunted by her past and unable to imagine a happier future. "She went through a lot as a kid; she watched her mom die" during the initial outbreak, Mansour explains. It's only after Iris and Hope receive a panicked message from their father — a scientist studying the virus at the CRM — that Hope realizes she needs to confront her trauma and go rescue her remaining parent. With the help of Silas (Hal Cumpston) and Elton (Nicolas Cantu), Iris and Hope embark on a cross-country journey, battling both physical monsters and mental demons along the way.

It's a story that Mansour sees as a conversation starter for mental health, particularly for young people currently struggling during the coronavirus pandemic. She hopes young viewers draw strength from Hope in the same way she did. "I just hope that when people watch the show, they'll realize it's OK to talk about what they're going through," Mansour says. "[Hope] doubts herself a lot, and I think as her and Iris go on this journey they realize they're a lot stronger than they think, and a lot smarter and a lot more powerful."

More like this
'The Queen’s Gambit' Season 2 Tweet Wasn’t From Anya Taylor-Joy
By Mary Kate McGrath, Jack Irvin and Grace Wehniainen
Ashton Kutcher Wants Danny Masterson “To Be Found Innocent” In Rape Retrial
By Jake Viswanath
Linda Ronstadt’s “Long Long Time” Plays A Pivotal Role In The Last Of Us
By Brad Witter
Pamela Anderson's Sons Brandon & Dylan Have Their Own Hollywood Careers
By Arya Roshanian
Get Even More From Bustle — Sign Up For The Newsletter
From hair trends to relationship advice, our daily newsletter has everything you need to sound like a person who’s on TikTok, even if you aren’t.