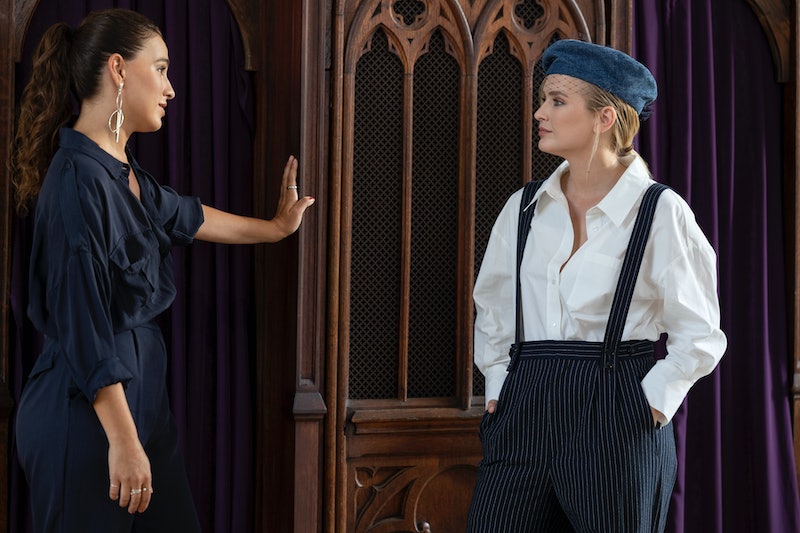 The latest entanglement is between Camille, Gabriel, and a newcomer, Sofia, who we meet in Episode 4. Sofia is a Greek artist who shows her work at Camille’s gallery, and she quickly makes her feelings for Camille clear. “I’m much more into smart, French women with exquisite taste,” she says after saying a guy at the gallery wasn’t her type.

One episode later, Emily stumbles upon Camille and Sofia making out at Alfie’s party. Soon after that, they get involved in a full-blown affair. It’s unclear what will happen to Camille and Sofia’s relationship during Emily in Paris Season 4, as Camille is revealed to be pregnant during the final scenes of Season 3. However, she’s definitely not with Gabriel anymore — so it seems plausible that Camille and Sofia may continue their romantic relationship later on.

Until then, let’s get to know the newcomer! Melia Kreiling plays Sofia on Emily in Paris and has Greek roots, like her character. She attended an international school in Athens, she told Rose & Ivy and shares with Sofia a fondness for the island of Hydra. “It’s where so many foreigners made their permanent homes there, like Leonard Cohen, they fell in love with it,” Kreiling told the journal. “There are no cars — it’s just donkeys, your feet, and water taxis, that’s it. There are no roads. It’s an unbelievable little place — it’s just paradise.”

As far as acting goes, there’s a good chance you’ve seen Kreiling on your screen before Emily in Paris. Most recently, she starred alongside James Corden on the Prime Video series, Mammals. She also worked with a fellow Darren Star alum, Sex and the City’s Kim Cattrall, on Filthy Rich. (Here’s hoping those theories about Cattrall joining Emily in Paris pan out, so they can reunite!)

Kreiling is even part of the Marvel Cinematic Universe, though you might not recognize her at first glance — because her skin was pink for the role. In 2014’s Guardians of the Galaxy, Kreiling played an alien named Bereet, who was an apparent date on Peter Quill’s spaceship. It was a brief role, but as CBR points out, Bereet actually has a much larger presence in Marvel Comics. So, who knows if the new Emily in Paris star might return to the MCU at some point?