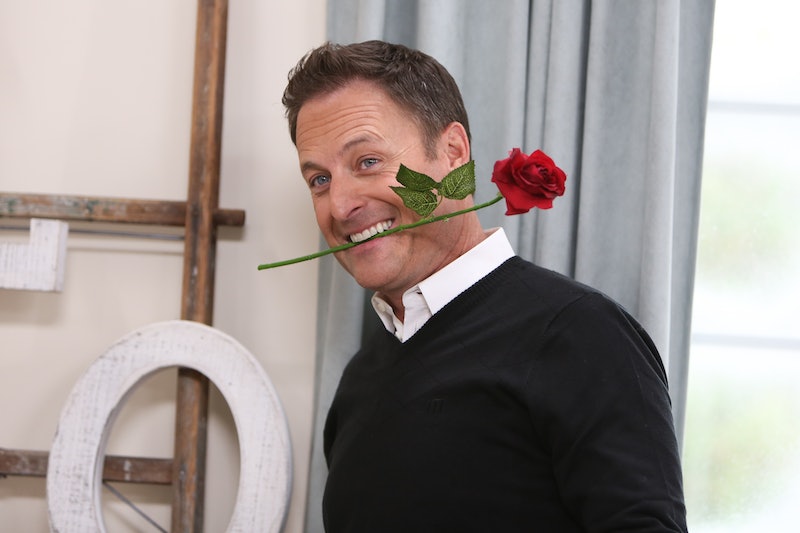 It’s official. After nearly two decades as host, Chris Harrison is leaving The Bachelor franchise. Now we’re left with a big question: With Harrison gone, who will host The Bachelor franchise? As ABC makes its final decision on who will replace Harrison, more details about his exit continue to come to light, revealing what actually happened behind the scenes.

Warner Horizon and ABC Entertainment initially announced his departure on June 8 in a statement, following a report from Deadline that Harrison would be taking an eight-figure payout and promising to stay quiet about the show’s alleged dirty laundry. “We are thankful for his many contributions over the past 20 years and wish him all the best on his new journey,” reads the statement, which did not address the terms of Harrison’s exit deal.

Now, in a telling new story published on June 16, The Hollywood Reporter revealed that a recent Good Morning America interview was partially to blame for Harrison’s exit from the series. “I plan to be back and I want to be back,” Harrison told co-anchor Michael Strahan during the March 4 interview. “I am saddened and shocked at how insensitive I was in that interview with Rachel Lindsay. ... I stand against all forms of racism, and I am deeply sorry to Rachel Lindsay and to the Black community.”

Even though the interview was intended to be a friendly encounter, especially since it was pre-recorded and GMA is also an ABC program like all Bachelor shows, a source close to the production of the dating reality series told THR that the “interview was the nail in the coffin” for Harrison’s return. After the interview, GMA’s Strahan didn’t feel that the apology was genuine: “His apology is his apology, but it felt like I got nothing more than a surface response. Only time will tell if there is any meaning behind his words.”

Apparently, before the March 4 interview aired, decision-makers had been telling Harrison to remain patient because they wanted him back on the show. Per that same source, former Bachelorettes Tayshia Adams and Kaitlyn Bristowe were hired as “mentors” and not “hosts” to leave space for Harrison, were he to return during the current season of The Bachelorette.

Sources are also sharing that another reason Harrison couldn’t return to the series was because of the current bachelorette Katie Thurston. According to an insider close to the situation who spoke with Variety, Thurston went directly to Harrison and let him know she’d be uncomfortable starring in this season if he was involved.

Thurston had previously shared her thoughts on Harrison’s via Twitter, writing, “I stand with other alumni who have expressed that learning and growth require time.” She added, “I hope that Chris Harrison continues to take more time to step away while sincerely educating himself and dedicating himself to the work. We can all grow and do better with time, and I hope he does.”

Of course, his return is not happening, as evidenced by his eventual June 8 goodbye message posted on Instagram on June 8. In the caption, he wrote, “I’ve had a truly incredible run as host of the Bachelor franchise and now I’m excited to start a new chapter. I’m so grateful to Bachelor Nation for all of the memories we’ve made together. While my two-decade journey is wrapping up, the friendships I’ve made will last a lifetime.”

His exit note comes months after Harrison announced he’d just be taking what was referred to at the time as a “temporary” break from the franchise, on which he was also an executive producer. The decision followed a controversial interview between Harrison and former Bachelorette Rachel Lindsay, during which he defended Bachelor contestant Rachael Kirkconnell’s racist past.

The series has had a rotation of guest hosts since Harrison’s hiatus and eventual departure, including sports correspondent Emmanuel Acho, who led Bachelor Matt James’ “After The Final Rose” special. It was also recently announced that the upcoming seventh season of Bachelor in Paradise will be guest-hosted by comedian David Spade alongside a rotating roster of other celebrities such as Lil Jon, Lance Bass, and Tituss Burgess.

Although ABC and Warner Bros. have declined to comment on any progress on their shortlist, an insider told Variety that finding a permanent replacement for Harrison isn’t top of mind at the moment. This means the next host will likely go unnamed until the upcoming season of The Bachelor goes into production this fall.

Even though the news broke weeks ago, past and present members of Bachelor nation are still commenting on Harrison’s departure. In a scathing New York Magazine op-ed Rachel Lindsay, who officially cut ties with the franchise by ending her podcast contract back in April, joked about Harrison's payout, writing, “Now, I wouldn’t come back and talk about something if they paid me. Well, maybe if they paid me eight figures…” More recently, former Bachelor Sean Lowe decided to boycott this season of The Bachelorette because Chris Harrison is no longer the host. His wife, Catherine Giudici told Us Weekly. “I’m watching it,” continuing. “My husband is kind of boycotting it because of the Chris Harrison stuff, but I’m watching it this season to support the girls.”

While fans wait for ABC to officially announce the next host, fans have thrown out plenty of ideas on Twitter. Here are a few of their predictions.

Tayshia and Kaitlyn have only co-hosted one episode of Katie Thurston’s Bachelorette season thus far, but viewers are already liking what they’ve seen. Many reaction tweets to Harrison’s exit called for the duo to host not only future seasons of The Bachelorette, but every other show in the franchise too. Insiders, however, told Variety it’s likely Tayshia and Kaitlyn will return for the next season of The Bachelorette led by Michelle Young, though it’s doubtful they’ll be fixtures on the show moving forward.

Others want to bring back Emmanuel.

Some fans are hoping David Spade will take on hosting duties for more than just Bachelor in Paradise.

Whoever ends up taking Harrison’s place, Bachelor nation seems more than ready to move on.