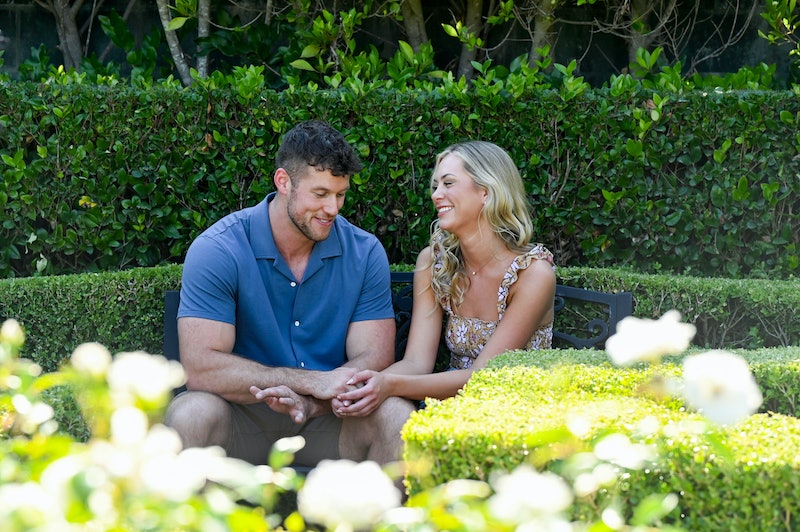 Fans of The Bachelor may remember Cassidy Timbrooks as the blonde woman who rolled up night one in a child-sized SUV, but she may ultimately be remembered for something else: her dramatic exit.

During the Jan. 24 episode, Bachelor Clayton Echard did something unprecedented and took back the group date rose he’d given to Cassidy before sending her home. This came after she ruffled numerous feathers in the house — but most critically, the reveal that she’d been dating another man right before coming on the show.

It all started on the first group date in Episode 2, which was a children’s birthday party hosted by the incomparable Hilary Duff. All of the women were assigned jobs to do, with some helping with the clowns, blowing up bounce houses, and baking cakes, while others set up wooden castles. Cassidy wanted no part of it. She seemed more interested in making out with Clayton and talking to Duff.

Things went from bad to worse when Cassidy dropped a cake that contestant Maya had made, then shrugged it off with no consideration or apology. “Cassidy doesn’t care what anyone thinks, and it’s disrespectful,” Maya told the cameras. Shortly thereafter, Cassidy wiped some of the cake on Clayton before inviting him to the pool to clean off, resulting in a steamy makeout session.

Feeling good about her standing with Clayton, Cassidy proceeded to gloat about her relationship with him to the cameras. “I’d be surprised if he had his eyes on anyone else but me,” she said. “I’ve done nothing wrong. I’ve done everything right. We have great chemistry, and I’m doing what I want.”

Some of the women tried to confront her about not pulling her weight with any of the decorations. However, Cassidy dismissed them by asserting she was there to date Clayton, not decorate a birthday party. “Game on, b*tches,” Cassidy told the cameras.

After spending the post-date cocktail party canoodling with Clayton once more, Cassidy was awarded a group date rose, cementing her position as a potential frontrunner. During a one-on-one interview, she told a producer, “I’d be lying if I said this rose didn’t absolutely solidify where me and Clayton were at.” The producer then asked her, “How does it smell?” to which Cassidy responded, “Like victory.”

When the cocktail party rolled around, Cassidy pulled Clayton aside for another conversation. Their chat started out fairly ordinary, with them discussing how strongly they felt about each other. After finishing their talk with a kiss, Cassidy returned to the group and told the women that Clayton was “intimidated, in a hot way” by her “unrelenting pursuit.” This set off fellow contestant Sierra, who Cassidy had apparently told that she was secretly hooking up with someone back home. The two were evidently communicating right up until Cassidy arrived on the show. Sierra unloaded the details onto a shocked Clayton, who then had a a brief conversation with host Jesse Palmer. “Has anyone ever taken a rose back before?” he asked.

The episode ended moments later, but Episode 3 picked up right where we left off, with Cassidy continuing to rub her fellow contestants the wrong way. Within the first five minutes of the episode, Clayton pulled her aside, somberly escorted her to a private couch, and confronted Cassidy about the rumors in the house. A shocked Cassidy denied the allegations. “I haven’t spoke to a guy that I’ve had any interested in relationship with for a very long time,” she said. Clayton continued to press, causing Cassidy to finally reveal that she was talking to someone back home, but that she wasn’t interested in continuing nor pursuing a relationship with that person.

Elsewhere, the women watched as Clayton walked away from Cassidy, leaving her in tears, and the audience with more questions than answers. Cassidy could then be heard crying, wondering how to salvage her relationship with Clayton only for him to suddenly appear. She then explained further that she’d had a deeper relationship with a person back home, but that she currently only had eyes for Clayton. Meanwhile, the rest of the women of the house continued to share stories about how Cassidy had wronged them, including one woman who revealed that Cassidy had asked her what her exit interview would be like. Shortly thereafter, Clayton decided to send Cassidy home despite her distraught pleas and ushered her into a limo, shutting the door behind her.

“I thought he liked me,” she said through tears. “I just didn’t think I was going home.” A dejected Clayton stood in the driveway as the women of the house celebrated the “poison” that had left the house. But as viewers of the show well know, one villain’s exit usually leaves the door open for a new antagonist to take over.