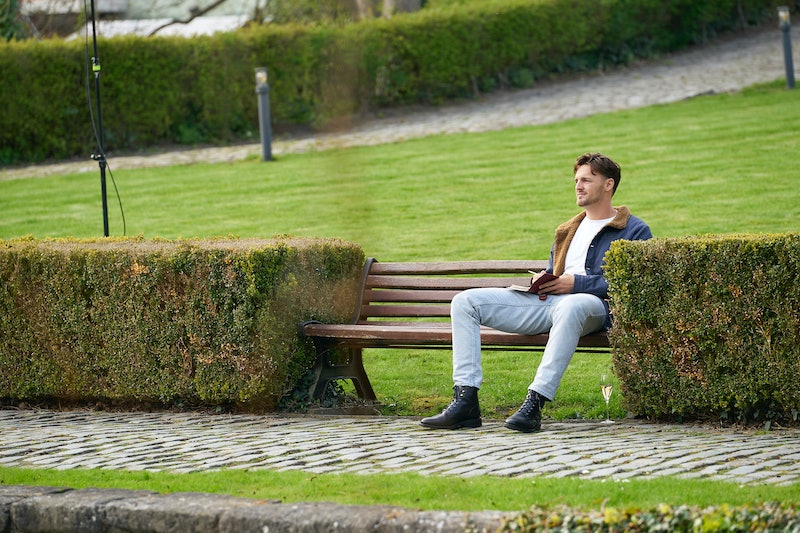 After dominating the last two episodes of this season’s Bachelorette, Logan Palmer’s time has come to an end. Some members of Bachelor Nation may rejoice at the general absence of Logan for the rest of the season, mainly due to their displeasure with the 29-year-old’s decision to switch from Rachel to Gabby despite continuing to accept roses from Rachel for weeks on end. However, in Episode 6, which aired on August 15, Logan was forced to leave the show because he tested positive for COVID-19.

Fans may remember how the franchise changed tactics to protect its stars during the pandemic. The Bachelor and The Bachelorette had single-location seasons, like Palm Springs and Farmington, Pennsylvania. For the most part, contestants were able to stay safe, but with international travel being reintroduced into the show, COVID has forced one contestant to call it quits early.

Logan seemed to have a strong shot at Gabby’s heart in the season. He’d have to be some kind of special for Gabby to accept his switcheroo, despite Rachel being clearly put off by the whole debacle. In the first part of the episode, Logan appeared on Gabby’s group date, where the men traveled to meet with a dominatrix for a sex workshop and participate in all kinds of sultry and tantric activities — whips, wax, the works. However, when the men reconvened for what would’ve been the evening cocktail party, Logan was suspiciously absent. With this week preceding hometown dates, it was the biggest evening of the season for Gabby’s men. But an unexpected complication derailed the night.

The men sat, waiting for Logan, only for cameras to cut to Jesse Palmer arriving at Gabby’s door as she readied for the party. He informed her that Logan tested positive for COVID, while also reassuring her that Logan was in good spirits. But Logan’s diagnosis meant the night was jeopardized. “Because we’re trying to take an abundance of caution for yourself and the rest of the guys,” Jesse started, “we’re going to have to cancel tonight’s cocktail party.”

Gabby asked Jesse to relay her message of well wishes before she reckoned with another cancellation, especially because it would hinder her group’s chances of getting a rose right before hometowns. Jesse then tracked down the men at the cocktail party and informed them that the afterparty was canceled. While the men gave their best to Logan, it was quite clear that they were pretty rattled at the thought of going into the rose ceremony without another conversation with Gabby.

When the episode did finally reach the rose ceremony, there was a feeling of uncertainty permeating Gabby’s men. She remarked that she can’t give out the usual four hometown roses without more time with her men and decided to only offer three. Earlier in the episode, Gabby had sent home Nate, which meant that her group of six was quickly whittled down. At the rose ceremony, on the stage across from Gabby only stood three men, and none of them were Logan, which means he is officially gone from the show. Johnny, Erich, and Jason received the coveted hometown roses. It seems like his COVID diagnosis officially dashed any chance Logan had with Gabby this season.

More like this
The New Bachelor Will Be Announced Next Week & Here Are The Top Contenders
By Grace Wehniainen
The 'Bachelor In Paradise' Schedule Shifts To 4 Hours Every Week After The Season 8 Premiere
By Brad Witter
Are Brandon & Serene Still Together After 'Bachelor In Paradise'?
By Kadin Burnett
Why Did Zach Leave 'The Bachelorette'?
By Kadin Burnett
Get Even More From Bustle — Sign Up For The Newsletter