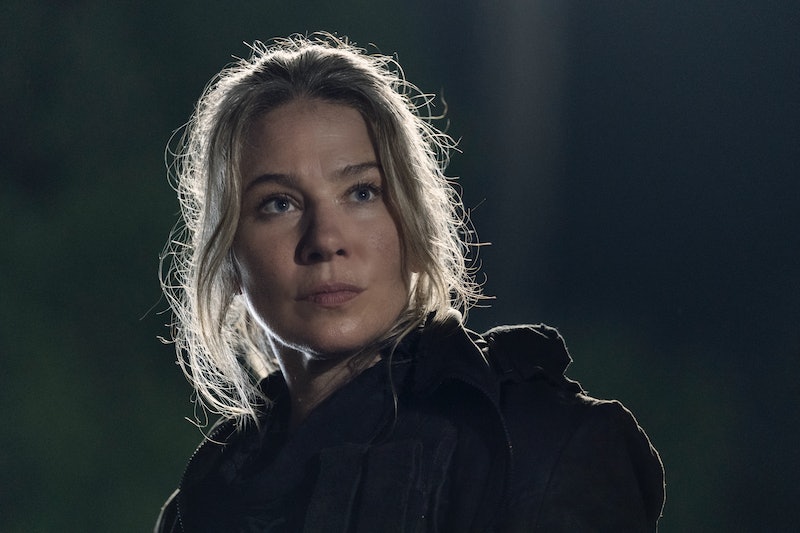 Spoilers ahead for The Walking Dead Season 11, Episode 8. It’s hard to name a character whose fate isn’t hanging in the balance at the end of the Walking Dead’s Oct. 10 episode — and you’ll have to wait until next year to see how it all unfolds. The show’s 11A finale sees Virgil get extremely injured, Judith and Gracie stuck in a flooding basement, and, most pressingly, Maggie and co. being shot at by hundreds of exploding arrows by Pope’s hwacha. Leah did just kill Pope, the Reapers’ leader, but doing so was ostensibly less about helping Daryl and more about keeping her own people safe from Pope’s tyrannical regime. So, will Leah actually kill Daryl’s friends?

The attack comes as the culmination of a conflict that’s been brewing between Daryl and Leah since she was introduced in Season 10. In a September interview with Fansided, actor Lynn Collins compared her character’s relationship with Daryl to Romeo and Juliet which, uh, didn’t end great for anyone involved. In a conversation with Decider, she also revealed that whether or not Leah will be a friend or foe to the group is still very much TBD. “I do have a particular fan that I’m in contact with who was like, ‘Please, please say that she does not become like a terrible villain. Please tell me that people are still going to be able to love this character,’” Collins said. “I was like, ‘I don’t know.’ ... all of these characters on some levels are gray and are making good decisions, bad decisions.”

Now acting as the de facto head Reaper, Leah is in a position to protect her people — and while her means may not be as reckless as Pope’s, she still doesn’t have a lot of love for Maggie and the group. The scariest part is that we know Daryl more or less rides off into the sunset of his own spinoff with Carol — and since three’s a crowd, Leah has to exit the situation somehow. But with an (ex?)-boyfriend as loyal as Daryl, it would take something pretty major for them to part ways for good. Like, maybe, Leah killing one of his friends.

Maggie, Negan, Gabriel, and Elijah are all in the arrows’ path, making them potential casualties. And even if they survive this particular onslaught (The Walking Dead loves a misleading cliffhanger), Leah lied to the Reapers and said Daryl killed Pope — further fanning the flames between the two groups instead of putting their conflict to rest.

If anyone does get hurt, Leah should look out. Daryl has never shown hesitation in avenging his loved ones; remember Beth and the hospital situation in Season 5? Granted, Daryl didn’t have a romantic relationship with Dawn like he does with Leah, but he wasted absolutely no time killing her after she shot Beth.

The fact that Leah, Daryl, and the Reapers don’t have comic book counterparts makes the outcome of the couple’s breakup that much harder to predict, but we’ll get some answers when The Walking Dead’s final chapter continues in 2022.

More like this
Netflix Shut Down 'Bridgerton' S3 Rumours About A “Very Dark” Storyline
By Bustle
'Friends' Star Maggie Wheeler Offers Support To Matthew Perry After Reading His Memoir
By Alyssa Lapid
Everything To Know About 'RHONY' Season 14
By Jake Viswanath, Alyssa Lapid and Brad Witter
'The Last Of Us' Episode 4 Put Twitter Into An Emotional Spiral
By Alyssa Lapid
Get Even More From Bustle — Sign Up For The Newsletter
From hair trends to relationship advice, our daily newsletter has everything you need to sound like a person who’s on TikTok, even if you aren’t.