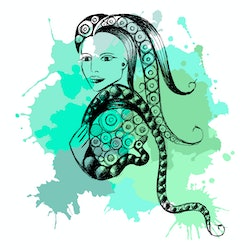 2020 is the year of unprecedented times, and in a very on-brand moment for these bizarre times, the rumor about Ophiuchus, the thirteenth zodiac sign, has resurfaced yet again. In case you missed it, the buzz is about a constellation called Ophiuchus that was allegedly left out of the zodiac in ancient times — and some people assert that because of that, it should technically be included, which would change a lot of people's zodiac signs. Obviously this concept, if true, could send both astrologers or horoscope readers alike into an absolute tizzy. But adding a new sign into the zodiac isn't just shocking — it's also a little more complicated than it seems. There are so many unanswered questions about how a thirteenth sign could fit into the current astrological scene. For example, what element is Ophiuchus anyway?

But before we dive into the complexities of considering Ophiuchus one of the zodiac signs, let's explore the origin of this theory. The idea of Ophiuchus being the thirteenth zodiac sign isn't anything new — back in 2011, comments from an astronomer sparked a similar astrological controversy — but this time around, many are pointing to a NASA article (which was apparently designed to explain the history of ancient astronomy to children and was last updated in 2016) to support the addition of Ophiuchus into astrology. The article explains that back when the ancient Babylonians were developing the zodiac, they left out the constellation so that there would be 12 signs for 12 calendar months, in order to better align the practice to the calendar. Because of this, some claim that Ophiuchus has a rightful place in the zodiac calendar — although many astrologers disagree. However, this isn't the first time Ophiuchus has caught the attention of astrologers, and it won't be the last. In fact, sidereal astrology sometimes includes the constellation in its calculations. So while Ophiuchus probably won't be part of the Tropical Zodiac anytime soon, it's not going anywhere — and you might as well learn all about it for fun.

So let's get back to the cosmic details. Astrology may seem like a free-flowing and interpretive art — and in many ways, it is! But it is also based on some very structured and rigid mathematical principles, and the 12 current zodiac signs as we know them are divided evenly into four groups of elements in astrology: fire, earth, air, and water. Each element contains three zodiac signs, and these signs all share certain qualities and motivations because of their element. The categories are fairly intuitive: Passionate signs like Aries, Leo, and Sagittarius are fire signs; emotional signs Cancer, Scorpio, and Pisces are water; concept-driven signs like Gemini, Libra, and Aquarius are air; and more pragmatic signs like Taurus, Virgo, and Capricorn are earth. This is all pretty well organized, so where would Ophiuchus fit in?

Unfortunately, nobody appears to have officially categorized an astrological element for Ophiuchus. However, we do know a little about the potential Ophiuchus personality traits — and this can help us make an educated guess. Represented by a snake handler, Ophiuchus is believed to be a healer with an interest in education and enlightenment. People born under this sign (which would be anywhere between November 29 to December 17) are said to be mysterious, ambitious, and tend to make good impressions on authority figures — but that doesn't mean they're totally grounded. They're also believed to be very passionate and power-hungry, with a jealous streak. Many people describe Ophiuchus' qualities as a mix between Scorpio and Sagittarius, since it would sit just between these two signs in the zodiac.

"I would assume [Ophiuchus' element is] fire because it gets things done and is magnetic, with a strong sexual desire," astrologer Lisa Stardust tells Bustle. "Ophiuchus is a go-getter and a doer, and it's also described as passionate." Fire signs in astrology are all about passion, action, and spirit. They tend to be creative, with big personalities (and equally big tempers), so it makes sense to guess that if Ophiuchus were to be added into the zodiac it could fall into this category, given its assigned personality traits. Not sure how we'd handle the blazing imbalance of having four fire signs while all the other elements are stuck with a measly three, but hey — we'll cross that bridge if we get there.

At the end of the day, because nobody has given it an official element, Ophiuchus' categorization is up to you — and while some astrologers hypothesize that it sounds like a fire sign, the decision is still majorly up to individual interpretation. So if you're a newly christened Ophiuchus, congrats! Your sign sounds pretty alluring. But if you want to stick with the original 12 zodiac signs, well, I don't blame you. I think I'll stick with them for now, too.

This article was originally published on Sep. 22, 2016