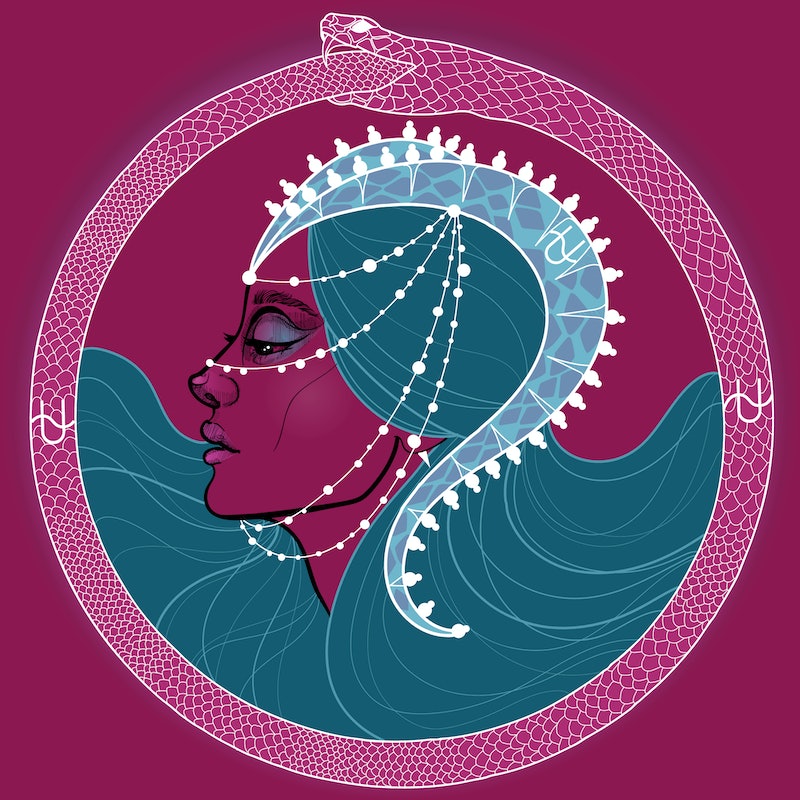 If you’ve been into astrology for a while, chances are you’ve heard some whispers (or screams, depending on who you talk to) regarding the existence of a potential thirteenth zodiac sign called Ophiuchus. Every few years, the possibility of Ophiuchus as the 13th zodiac seems to make headlines, causing the internet to go into a mini-frenzy about whether the zodiac as we know it is totally wrong. This zodiac game-changer is sure to resurface again at some point, so let's break down the Ophiuchus drama once and for all — and figure out if you've been living a total astrological lie.

The whole debate stems from a NASA article, which claimed that the true zodiac should include a 13th zodiac sign called Ophiuchus, given the location of a constellation of the same name. (The original NASA article on Ophiuchus was updated and redirected to a new URL in 2021, and no longer includes any mention of the 13th sign — but the zodiac-warping sentiments that sent astrology fans into shock is available to read on NASA’s Tumblr.) The constellation of Ophiuchus is nestled between Scorpio and Sagittarius, which some people believe gives it a rightful place in the zodiac. This would mean that Ophiuchus account for 18 days worth of the sun's cosmic residency throughout each year, and that anyone born between approximately November 29 to December 17 would actually have Ophiuchus as their zodiac sign instead of Sagittarius.

This leads us to wonder about the Ophiuchus personality traits, and whether people born during this period might actually have a zodiac profile that fits them more accurately than Sagittarius does. But additionally, this astrological addition wouldn’t just affect those born during Ophiuchus’ zodiac season. The rest of the zodiac dates would also need to shift to account for the new sign, which implies that many people’s zodiac signs would end up changing. Have we really been reading the wrong horoscopes all this time?

Not so fast. Many astrologers (including myself) are skeptical of Ophiuchus being incorporated into astrology. Even NASA’s updated webpage acknowledges that astronomy is not the same as astrology, so not all astronomical updates will necessarily have an effect on the zodiac. But because astrology is such an interpretive and ever-evolving practice, anything is possible. So let's entertain the thought for a moment: If Ophiuchus is a zodiac sign, what are these mysterious 13th members of the zodiac like?

What Are The Ophiuchus Personality Traits?

With the 12 currently-accepted zodiac signs, we can look to categorizations like their duality, modality, or element in astrology to glean insight into their zodiacal energies and the way they operate. But that neat-and-tidy system of astrological organization doesn’t yet apply to a new sign like Ophiuchus. "There’s no element that Ophiuchus has been assigned to, so we’re not sure if it fits into the world of astrology as we know it," astrologer Lisa Stardust tells Bustle. "Whether or not it’s real, it’s [believed] that Ophiuchus is like a more power-hungry version of Capricorn."

Because we're unsure what element or modality in astrology Ophiuchus would fall under, it's hard to say what an Ophiuchus-born person would be like — although some astrologers have their theories, based on the mythology behind the constellation's name. The supposed 13th sign is unique in that unlike the 12 signs we're already familiar with, Ophiuchus is associated with a real person named Imhotep, aka Serpentarius or Aesclepius by the ancient Greeks. Imhotep lived in the 27th century BCE in Egypt, and its namesake constellation (and potential zodiac sign) is represented by the powerful symbol of the serpent-bearer.

Ophiuchus does not have an opposite zodiac sign as all the other do, meaning we can’t easily contrast its qualities against any other zodiac archetype. But because the sign falls in between Scorpio and Sagittarius, it’s believed that many of its traits do, too. Ophiuchans would likely be desirable, mysterious, and powerful — similar to Scorpio zodiac signs. And just like Sagittarius zodiac signs, they’d likely be blessed with good luck and a sharp sense of humor.

Like both Scorpio and Sagittarius, Ophiuchus is also believed to be a passionate sign. But intense passion can be a double-edged sword. Like their zodiac neighbor Scorpio, they’re thought to be a bit jealous and secretive — but with an arrogant temper as wild as fiery Sagittarius. That said, Ophiuchius is also believed to be a more introverted zodiac sign who enjoys time alone and has lots of creative instincts.

Like every other sign, Ophiuchus’ zodiac personality has its positives and negatives — but based on what we know now, most of these qualities can be just as easily applied to those associated with either Scorpio or Sagittarius (aka the two signs that currently reign over Ophiuchus season’s birth dates). So if you're born between November 29 to December 17, don’t throw in the towel on your current horoscopes just yet. Even if you relate to the personality traits of Ophiuchus, you might just be relating to the qualities of your Scorpio or Sagittarius sun sign. But then again, maybe someday all of that will change and Ophiuchus will be an accepted member of the zodiac. Only time will tell.

This article was originally published on Sep. 20, 2016