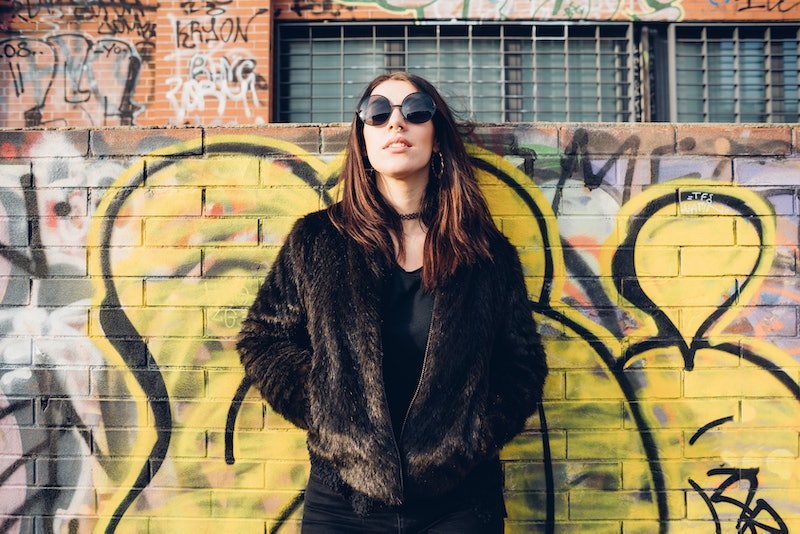 As a proud (and predictably stubborn) Taurus, I'm not personally affected by the renewed debate about Ophiuchus, the 13th zodiac sign,. The sign — which falls between Scorpio and Sagittarius and covers anyone born from November 29 to December 17 — is not unanimously regarded as part of the official zodiac. But it's still interesting to learn the history behind the sign and what personality traits Ophiuchus' possess. Most importantly, if you're someone who uses astrology for love, (because who doesn't?) you may be even more curious about what the Ophiuchus sign is like in relationships, and which signs are most and least compatible with them.

Ophiuchus' (pronounced Of-ee-You-Cus, for those of you who were as stumped as me), literally translates to "serpent bearer," and is symbolic of a human being intertwined with a snake — perfect for all you Slytherins out there. Their personality, though snakelike in some ways, actually has a lot of depth, and their ideal partner is (naturally) someone who complements them and can handle some of their less ideal traits.

"Ophiuchus’ are generally happy individuals who are truthful and honest, intellectual and clever, and full of charisma and creative talents," Didi Wong, integrative wellness and life coach, tells Bustle. "They are ambitious and want to be at the top of their game, but like a serpent, like to be secretive. They can easily adapt to change, which is why they naturally hate routine, and they need a partner that understands their passion for exploring the world and sometimes living the life of a rolling stone. They also tend to be impatient, temperamental and judgmental, while not considering the consequences, which can create unhealthy jealousy in relationships."

According to Wong, the most crucial element of success for a relationship with Ophiuchus is respecting their need to feel free and unbound, as well as their need to be praised. Someone who's intellectual but happy in a "supporting role" is the best fit for an Ophiuchus. "The right partner should not need to be praised as much and needs to possess inner confidence to enhance what an Ophiuchus can offer," she says. "The right partner needs to be a strong backbone to the relationship, much like the crew of a movie that shines a light on the actor him/herself."

Whether you're an astrology fanatic or a hardened skeptic, it can't hurt to check out your horoscope every once in a while and see what the stars might have in store for you. If you're curious about whether you might be a good match for an Ophiuchus, check out Wong's list of the five most compatible signs for Ophiuchus.

Pisces is the perfect match for Ophiuchus because they're both creative day-dreamers. According to Wong, these are two signs who can easily share their emotions and feelings, which is important in a relationship. " "Even more, both signs are easygoing when it comes to adapting to new environments, so they would be great together in times of change, which can be constant," she says.

Capricorn, who's known for being practical, goal-oriented, and ambitious, would get along really well with Ophiuchus. According to Wong, they're both intellectually driven, hard-working, and competitive in both their professional and personal lives. Both partners will be understanding and supportive when the other needs to put in extra time at work, as they know that some things are necessary when you want to achieve your goals.

When it comes to love matches, not all zodiac signs can successfully date someone with the same sign. After all, you're worst traits will likely be mirrored back to you. But according to Wong, a couple with two Ophiuchus signs would have a lot of fun together. "An Ophiuchus is continually seeking enjoyment, so it would make sense that they are extremely compatible with their [own] kind, especially in times of traveling in pairs," she says.

Both Ophiuchus and Cancer are loyal and possessive signs. "The latter trait sometimes borders [on] jealousy," Wong says. "But it paves the way for physical and emotional satisfaction, both of which are keys to a successful relationship." It's a good match overall as Cancer will make Ophiuchus feel right at home, while Ophiuchus will make Cancer feel needed.

"Ophiuchus and Libras work great with each other since Libras — a soft mix of Capricorn and Pisces — are intellectuals, creative thinkers, and art enthusiasts," Wong says. Both Ophiuchus and Libra have a "hunger for discovering new places and diving into the unknown." Chances are, these two signs would start off as friends before taking it to a more romantic level.

This article was originally published on Sep. 27, 2016