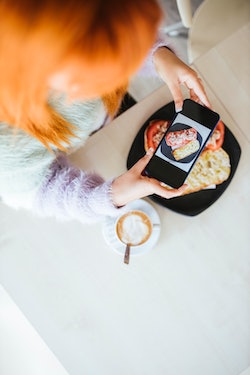 Much like the spirit of “Do it for the Vine,” there’s a lot of things that people are willing to do to keep up with TikTok trends. Despite schadenfreude-inducing fads like the Milk Crate Challenge, most of the trends that pick up on TikTok are pretty innocuous. Wholesome, even. Among the dance trends, couples quizzes, and pass the phone challenges, one of the most heart-warming (and drool-worthy) genres of viral TikToks are food trends. Not only do they help us get off our phone for a bit while we try out the latest recipe, but they also result in, well, food. Even if your food trend video doesn’t go viral, you at least end up getting nourished — which is very “Shoot for the moon, land among the stars” energy. And, by the looks of how food trends went in 2021, it appears that the sky is the limit for 2022.

There’s no surefire way to know what will go viral on TikTok. Many of us post content and hope that the faceless deity that is The Algorithm looks benevolently upon us. But, as any influencer or professional content creator will tell you, there are a lot of ways to predict what will be trend-worthy on TikTok. For most viral videos, it might be using certain hashtags or sounds that have gotten traction in the past. But, for foodies, the ingredients to crafting a viral food trend might take some extra secret ingredients.

What Makes A Food Trend Go Viral On TikTok

As Shalean LaBerge, co-creator of @SoFloFooodie, a TikTok account with 2.8 million followers, tells Bustle, one of the key factors behind a trend-worthy food recipe is “the ability for it to be replicated.” This is clearly a focus in foodie creators’ videos, as most opt for step-by-step, one-dish tutorial videos over intricate three-course meals requiring professional equipment. “In most cases, the dish would have about one to five ingredients,” says chef, DJ, and music producer Jori Mezuda, who has over 2 million followers on TikTok. From 2020’s baked feta craze to 2021’s salmon rice bowl, the more accessible a recipe is for amateur cooks, the more likely it is to come with loads of likes, remakes, duets, and stitches.

LaBerge adds that recipes that can be easily customized by a creator are also great for food trends. Exhibit A: Cloud bread. As the recipe went viral in 2020 for its uniquely fluffy, cotton-candy-esque take on bread, many users continued the trend by adding different food colorings and other decorative ingredients to the recipe. Exhibit B: The focaccia art that kept plenty of TikTokers busy making gardenscapes and other vegetable-adorned loaves during lockdown. Exhibit C: Mezuda’s viral interpretation of the tortilla fold hack, in which she uses the hack to create a Taco Bell-inspired quesarito.

Along with simplicity, aesthetics, and customizability, food hacks for common dishes have become extremely popular on the app. Small tweaks to everyday recipes like pesto eggs, baked oats, and the folded tortilla method have blown up on the app as simple hacks to level up everyday recipes. Mezuda also notes that any recipe that “hits the sensory of sight, taste, & hearing” are sure to go viral — whether they’re aesthetically appealing, yummy, and/or have a ASMR-like crunch to them.

However, even a recipe with all of these factors isn’t a guarantee that it will go viral. A large part of a food trend’s virality also stems from current cultural moments (see: the dalgona candy challenge from Squid Game) and other zeitgeist-y factors.

As for 2022, it’s tough to say for sure what’s exactly in store for TikTok foodies. However, some growing trends of 2021 have given us an amuse-bouche of what’s to come. Here are some food trend predictions we can likely expect to see in 2022.

Instead of having to struggle through making cloud bread at home next year, you’ll be able to order it to your door. On Dec. 17, TikTok announced a partnership with Virtual Dining Concepts and Grubhub, where ghost kitchens (aka delivery-only restaurants) will pop up around the nation to deliver TikTok-viral food to you. Currently, there are plans to launch 300 of these restaurants by March, and 1,000 by the end of the year. What could be better than actually getting to experience the next creamy ramen within the hour of smashing the fave? Per TechCrunch, profits from these orders will be invested in the original creators of the recipe — allowing them to come up with even more delicious viral creations.

“With things getting a little more back to normal,” says LaBerge, “I can only think people will go back to having even less time in the kitchen.” The WFH renaissance of 2020 and 2021 has already seen many quick at-home lunch recipes on the rise. As such, recipes that require short prep times and hands-off cooking methods will likely only grow more popular in 2022.

Air fryers have especially risen to the occasion in this sphere, due to their convenience and versatility. “I use mine almost every day,” says Lilly of her air fryer. Mezuda also notes that air fryers provide an extra crunch from frying without compromising on health, since air fryer recipes use little to no oil.

Plant-based eating has grown in mainstream appeal in recent years, with many foodies creating platforms of vegan, vegetarian, and flexitarian options. Not only is eating plant-based often more sustainable, but, as TikTokers have proved, it can also be pretty dang tasty. LaBerge notes that the demand for more plant-based options has gotten many major corporations, restaurants, and business involved in the market — which she predicts will make plant-based recipes grow even more in popularity.

Similarly, Lilly predicts that “bizarre nice cream flavors” will pick up next year. Nice cream, which is a banana-based version of ice cream, is another plant-based, dairy-free swap that has become beloved by vegans and lactose intolerant folks alike. “I am sure people will get creative with the flavors,” says Lilly.

LaBerge says that she and her SoFloFoodie co-creator Stephanie Ghitis have posted videos with copycat recipes of nostalgic treats like Hostess’s Little Debbies and Twinkies on TikTok that have done “exceptionally well.” LaBerge predicts that copycat imitations of popular restaurant dishes and, especially, nostalgic foods will likely continue to grow in popularity.

Much like the saying, “You’ll always need a plumber,” you’ll always find viral coffee renditions on TikTok. The staple drink has long been a muse for re-imaginations whether it’s Starbucks copycat recipes, or viral recipes like whipped coffee. Lilly hopes that we’ll see more inventive takes on the beloved morning pick-me-up. “I think people are totally sleeping on the heavenly combination of fruit and coffee,” says Lilly, who notes that blueberry espresso tonics have become a recent go-to.