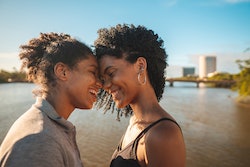 The zodiac's ram is typically described as confident, bold, ambitious, impulsive, and yes, a little on the selfish side. When two Aries get together, it's a passionate and high-energy relationship made up of two big personalities: even bigger egos. As with any couple who shares the same zodiac sign, this pairing has a way of bringing out the absolute best and worst in each other. Aries and Aries' zodiac sign compatibility will tell you everything you need to know about this fiery duo.

“Their basic 'getting along' factor is actually pretty good," Kristina Semos, astrologer and owner of AstroOils, tells Bustle. “They will be up for anything together, which is great since each is spontaneous and takes action with zero to little thought behind it. Expect fireworks, lots of energy, excitement, loudness, and adventure.”

Rams are cardinal signs, which means they’re the initiators of the zodiac. If sparks fly on their first meeting, they won’t hesitate to get each other’s phone numbers or go out for drinks immediately. They’re competitive by nature, so they’ll have a lot of fun playfully teasing each other as a way to flirt. Aries zodiac signs are ruled by their desires, so they tend to fall in love pretty quickly. It’s likely going to be a whirlwind romance for two passionate rams. Keep reading to learn more about Aries and Aries compatibility in relationships, dating, sex, and friendship.

Sexually, Stephanie Gailing, astrologer and author of The Complete Guide to Astrological Self-Care, tells Bustle, this duo is fiery. "Their chemistry burns quite hot, and their passion may be feverishly intense." Being ruled by Mars, the planet of sex, desire, and action, Aries are known for having high libidos. They'll never find another person who can keep up with them in the same way as another Aries could.

The only real issue in the bedroom is Aries' competitive streak. According to Gailing, they need to remember that while sex may sometimes seem like a sport, it's perfectly fine to take turns being on top.

Emotionally, an Aries-Aries love match works because no one gets the ram as much as another ram. According to Semos, both partners understand each other's short tempers and can quickly get over any emotional outbursts without holding any grudges. You may not find them having emotional conversations about their feelings for each other, but these two express their love through encouragement, support, and loyalty.

Aries is the type of sign that falls in and out of love fast. Rams go hard when it comes to pursuing a romantic interest. Once the newness wears off, they tend to lose interest. But when you have an Aries and Aries relationship, there's never a dull moment between them. "Aries is quick, both in motion and in their mind," Gailing says. " This can lead to enthralling conversations in which lots of territories can be covered, which delight Aries — and their need for the fresh and new — to no end."

A double Mars sign matchup can be “pretty intense,” Stina Garbis, professional astrologer and psychic, tells Bustle. “This pair could be co-patriots and a force of change,” she says. “If these two were in the battle trenches they would fight fiercely together, for each other, and side by side. They can tackle any team that is against them.” This works really well when they’re playing for the same team or they’re working on a project together. They’ll encourage each other to keep pushing forward, helping each other grow. Since Aries is a spontaneous, action-oriented sign, a pair of ram friends will enjoy a lot of last-minute adventures together. They’ll always have a fun time.

But Aries is competitive, which could lead to some toxicity in their friendship. “They may find themselves battling each other, trying to best each other,” Garbis says. “If any one of them gets more of the spotlight, jealousy may take over causing spite and rage.” Aries don’t back down from fights, so if these two get into it, there’s a chance they may stop being friends. As long as they try their best to remain supportive of each other, this could be a friendship that lasts.

Aries is a highly independent sign who loves making their own decisions, creates their own schedules, and lives by their own rules. While that’s not necessarily a bad thing for a relationship, it could require some adjustment for both partners to fully embrace being part of a relationship.

“The first date will tell you everything you need to know,” Inbaal Honigman, celebrity psychic and astrologer, tells Bustle. “If both Aries partners try to take control, can't agree where to go for the date, or make critical comments about each other's drink order it ... wouldn't work. If the first date goes without a hitch and they play nicely together, two Aries can enjoy a lifetime of excitement and joy together.”

Honigman points to Sarah Jessica Parker and Matthew Broderick, two independent Aries signs who’ve been married for at least two decades. “Their marriage proves that two Aries don't need to hold each other back,” Honigman says. “Empowering one another works just as well for this fire couple.”

When it comes to communication, rams don’t hold back. If they feel mad, sad, happy, or disappointed, they’ll let you know in the most direct way possible. According to Garbis, two Aries signs talking might get a little loud.

“They may laugh a lot and find that they share a similar riotous sense of humor and can find themselves laughing all night at off-color jokes,” she says. “At the same time, they may also offend easily. Even if they have a good night, they may be bitter the next day over something that one of them has said.”

The good news is, Aries is always moving forward so they tend to get over things after a reasonable amount of time. If they’re fighting over something that isn’t that big of a deal the next day, they’ll likely get over it and act as if nothing happened.

The Biggest Potential Problems In An Aries And Aries Relationship

Although they make a great match in many ways, being of the same zodiac sign comes with its share of issues. For instance, Aries, the first in the zodiac, rules the House of the Self. Thus, there is a tendency for rams to put their individual needs over the needs of the relationship. Aries are independent and have such a "my way or the highway" attitude that there's barely any room for compromise.

The biggest problem area between these two is their fights. "Two Aries together can really fight it out, as their Mars-ruled energy highlights aggression and combativeness," Semos says. Aries hate losing. Unless one or both partners are willing to back down, a small disagreement can quickly turn into a full-blown fight.

Are Aries And Aries A Good Match?

The good news is, all zodiac combinations have what it takes to make a relationship last. "If we're talking about two highly-evolved Aries who realize that their egos simply cannot run the show all the time, and they've learned some basic relationship skills like effective communication and listening, then this could work," Semos says. "If they haven't, then it'll be a fun and dramatic fling that will make a fantastic story to tell their friends."