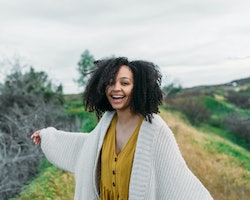 If you're into analyzing your birth chart, tracking every planet's retrograde, or doing rituals with the moon cycle, then there's a good chance you're into astrology memes, too. And if you're not, well, there's still a good chance that you appreciate them. But the world of astrology memes can be polarizing, too. After all, they broadly generalize the 12 zodiac signs and make wild, sweeping assumptions about them (sometimes good ones, sometimes not). Experts may be annoyed at the way memes reinforce stereotypes and portray the complex practice in such a simplified way, while skeptics may use that very same justification to support why they think the entirety of astrology is bogus in the first place.

As an astrologer and an astrology memer myself, I'm here to present the case for astrology memes. As most millennials and their adjacents can attest, memes are a universal language. Because no matter how isolated or numb you feel while doom-scrolling through your phone alone in the dark, seeing a meme that encapsulates your feelings, habits, or something else about you can make you feel seen — and not quite so alone. If they can make you crack a smile? Even better. Memes are fun, but they're also a helpful tool that both inspire us to connect and allow us to feel connected.

Astrology has always been similar to memes in that way. Even people who have never heard of a birth chart or a rising sign are able to connect with others by swapping zodiac signs or talking basic astro compatibility. Like memes, astrology is often used as a quick and easy shorthand for connection with another person. Why do you think "What's your sign?" has become such a stereotypical pick-up line? For the same reason that DMing someone a funny meme is the millennial equivalent of a stereotypical pick-up line. It was only a matter of time before these worlds collided.

Given the nature of a standard meme (and the vastness of astrology as a practice), stereotyping and over-simplification are basically required — so you don't have to be an astrology expert to make a meme. Take Courtney Perkins of Not All Geminis (@notallgeminis), one of the most popular astrologer memers on the 'gram, as an example. "I’m a writer who loves astrology," Perkins tells Bustle. "I think very serious astrologers sometimes get annoyed at the memes because they can dilute the message, but I also don’t think people become obsessed with astrology memes and then stop there." According to Perkins, even simple astrology memes can inspire people to look deeper into the practice. "My messages are full of inquiries about where to get readings, what books are best, and which accounts they should follow," Perkins says. "The astro meme community is curious, and often well-informed!"

But of course, sometimes your astrology meme source can double as a source for hardcore astrology, too, as is the case for accounts run by professional astrologers. "I understand astrology as magical therapy; a way to access the inner workings of our soul and the complexities we experience throughout our lives — so I understand when astrologers think that astrology memes are reductive and over-simplistic," says memer and astrologer Leona Moon of Leona Moon Astrology (@leonamoonastrology). "But I try to treat them as a gateway into the world of astrology. Zodiac signs and astrology memes make the art of astrology accessible, and sometimes that lights a fire in someone that they didn't know they had."

And it's true: Astrology memes inspire a lot of people to look deeper into the world of astrology. In fact, some legit astrologers credit astrology memes with getting them into the practice, like astrologer Shinobi of Black Girl Horoscope (@blackgirlhoroscope), who was a meme fan before she was a memer/astrologer herself. "Astrology memes would always be strikingly true about either me or someone I knew of that same sun sign, and it piqued my interest about astrology," Shinobi says. "That's what got me into it."

They're About More Than Just Astrology

The whole point of memes are to be relatable; to help us connect. And the reason we want to share them is to be able to share a little piece of who we are without outright saying it — and to find common ground with others, too. Astrology memes are no different. They simply use zodiac signs as the medium. "I think [astrology memes] are a great cheat to get to what people really want to talk about," Perkins says. "Sometimes a friend will send me something I’ve just posted and be like, 'Oh my God I have to tell you about this Scorpio,' and it just turns into a nice bonding moment of communication. The meme is the conversation starter, but the connection is the best part."

Most memers and astrologers will agree that connection truly is the best part of this intersection of realms — connection to yourself, as well as connections to friends, old and new. "Astro memes are a great vehicle to understanding yourself and others. I’ve found that a lot of people find someone to relate to based off of a shared sun/moon/rising sign, and that is my favorite thing about astrology," Shinobi says. "Because of one of the memes I created, one of my followers realized that she and I share the same sun moon & rising sign and we instantly became friends ... I really love how much I get to connect to people through the platform!"

Memes bring connection, and the point of connection is to enrich our lives — which leads to one of the other major elements of why astrology memes are so valuable, and that's humor. "I started making astro memes as a way to make other people laugh," Moon says. "Even though most astrology memes are dismissive of how complex and deep astrology actually is, I find that the laughter they bring feels healing, and I want to share that with as many people as possible."

The Verdict? Astrology Memes Are Here To Stay

Whether they're made by an astrology fan making generalizations, or a professional birth chart caster basing tropes on wisdom and experience, there's a reason why astrology memes have been so popular for years now. "Bottom line, I think astrology memes are an amazing way to talk to the people in your life about the things that matter most to them — love, family, relationships, friendships, career, education, sex, anything," Perkins says. "It can open the door to any subject, and really bring people closer."

Love 'em or hate 'em, astrology memes are here to stay — and if you whiz through some of your friends' recent stories today, I bet you'll come across at least one of them. Send one to a friend and see if you can't start a good conversation.