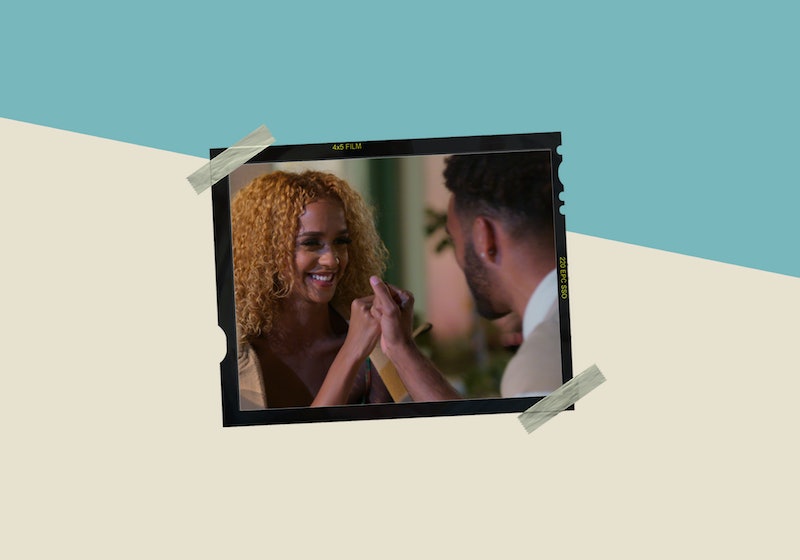 Ever since 2020 introduced experimental dating shows like Too Hot To Handle and Love Is Blind, we’ve entered a reality dating show renaissance. But even with so many different spins on romance, there’s no show doing it quite like Amazon Prime’s Cosmic Love. On the show, which premiered on Aug. 12, celebrity astrologers Ophira and Tali Edut, better known as the AstroTwins, take their 30 years of celestial wisdom to TV by infusing astrology and matchmaking to help four hopeful singles, known as the “Elements,” find — and hopefully marry — their soulmate.

The Elements represent all four astrological elements: Phoebe Davis (Leo, fire element), Maria Rodriguez (Capricorn, earth element), Connor Shennan (Gemini, air element), and Noel Allen (Pisces, water element). With guidance from a mystical “Astro Chamber,” the contestants make decisions based on astrological insight to find a partner among 16 other singles — without skimping on the power of their own free will.

If you’re new to the celestial world, Cosmic Love’s gamification of astrology makes it easy to follow along. “We have X-ray content, which is a little popup video that comes up while you're watching the show. People can hit pause and get a little mini astrological lesson from us during the show,” Tali Edut tells Bustle. “So we hope people will actually get interested in learning about their own astrology and their own deeper dives into themselves.”

Ophira and Tali, who are identical twins, have given cosmic insight to A-list legends like Beyoncé and Alicia Keys, and now they’re ready to shed light on the power of trusting the stars. Here, the AstroTwins tell Bustle about astrological compatibility and how using the stars as a road map can help you deepen your understanding of yourself.

Can you tell me a little bit about how astrology impacts someone's romantic compatibility? I’m an Aquarius, so my relationship with a Pisces isn’t totally doomed, right?

Ophira: On the surface, the two Zodiac signs are sun signs and you want to compare them. OK — but are you a fire sign, an earth sign, an air sign, or a water sign? Everybody has a complete chart with the placements of all the planets at their time of birth. It’s only when you really look at the full chart, can you see if there's compatibility or ease between the two people and the relationship.

Right. There are a lot of layers.

Ophira: Yeah. A lot of layers. You may have very different sun signs, but then you find out that your moon sign, which rules your emotional temperament and how you bond and what you need to feel secure, is a really compatible combination. So those differences in your sun signs don't really bother you, because emotionally you're in sync.

How can someone use astrology as a tool for their relationships?

Tali: It's not just synastry. It's also just knowing yourself. Understanding your chart and what makes you tick allows you to accept yourself. And when you're accepting your authentic self, you become a magnet for people who also do the same. Now, of course, that's a lifelong journey for us all. But just knowing yourself, and being able to say, "Hey, that's my Scorpio moon doing its thing. Let me dial it back here or take a look inside" is where the real beauty and magic comes into relationships.

What would you say to someone who might be a little skeptical about trusting the stars when it comes to relationships?

Tali: Try it out, test it out, see how it works for you — just get curious about it. It's a great inquiry to have, but you don't have to take it as like the rule and the truth.

I totally agree — it's a nice road map. Let's talk a little bit about Cosmic Love. What do you hope audiences learn about astrological compatibility from the show or just about dating in general?

Tali: I really hope people will learn that it's not just about the other person's chart, but it's about learning about your chart too. Because that's what we did with the four Elements, who go into the Astro Chamber to go and get their readings. They learn their sun sign, then their moon, their Mercury, their Venus, and their Mars rising. So they were learning about themselves while they were getting matched.

Ophira: Yeah, and that audiences won't get overwhelmed by it. They'll really get to see people living out their charts, so they can go beyond the stereotypes and say, "Oh, that's how it plays out."

Obviously, reality dating shows are a hot topic right now. How do you see Cosmic Love fitting into the current trend of dating shows like Love Is Blind or The Ultimatum?

Tali: There was enough interesting self-discovery happening on its own, rather than having to manufacture drama. It was like unpacking a mystery of the people who are on the show as you learned about them and watched them learn about themselves.

We'd give them a reading and they would go on a date. Maybe that person would be their match or maybe they wouldn't. They were allowed to just go by free will, but we would give them some advice based on their charts. So, to watch that and just have them discover or fumble a little, made it interesting. It was more in line with the genre of Love Is Blind where there was a social experiment — that desire for deeper connection was there.

Ophira: When you’re dating with astrology, it's like you have this little checklist where you can be like, “Well, this is my chart. This is theirs.” You can't really do that on most dating shows. You just have to be like, “Who is this person? I better make out with them after cocktails to find out what they're really like.” Which is maybe good TV, but we've seen it a million times.

This is a new, interesting spin that gets into their psyches a little bit. But also, the audience can also say, “Oh, well they're a Gemini. So of course they're going to act like that.” Who doesn't have an ex of a certain sign that you feel unresolved with? Well, you can watch someone of that sign go through a vulnerable moment and maybe gain some healing just from watching it.

More like this
Why A Libra & Capricorn Couple Will Have A Difficult DTR Conversation
By Kristine Fellizar
Why Harry Styles & Olivia Wilde Make A Great Couple, According To Astrology
By Nina Kahn
Are Libra & Scorpio Compatible In A Relationship?
By Kristine Fellizar
Think Your Partner Is Cheating? These Tarot Cards May Confirm Your Suspicions
By Kristine Fellizar
Get Even More From Bustle — Sign Up For The Newsletter