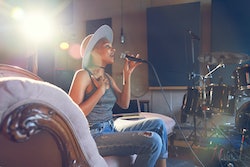 You’re probably an expert at using astrology for dating and friendship compatibility, but your birth chart is also a great tool to use professionally. Your zodiac sign can help you figure out what the best career would be for you. For dreamy and imaginative Pisces, the ultimate occupational calling is one that allows them to exercise and support their visionary ideas. As an emotional and sensitive water sign, Pisceans crave the catharsis that comes with expressing their deep feelings, so they’d work best in a creative field — and since they’re a mutable sign, they can effortlessly keep up with a hectic lifestyle of a creator. Whether it’s painting, writing, singing, or bringing their TikTok skits to the small screen, the best career for Pisces zodiac signs is an artist, allowing them to manifest their wild and often eccentric ideas.

“Pisces are highly creative individuals who often need multiple outlets for their ideas and dreams. It’s not uncommon for Pisces to bounce from one idea to another and juggle multiple artistic ventures at once,” Lauren Ash, an astrologer, tells Bustle.

Although having your sun sign in Pisces gives you an imaginative edge, both your Mars and Mercury signs can be great indicators that you’d work well in this field, according to Ash. That’s because Mars rules ambition and impulses, whereas Mercury is related to the expression of mindset and communication. If you have a Pisces Mars, you can dream without limits and don’t let opposition or doubt deter your pursuit of artistry. If your Mercury sign is Pisces, you feel at home expressing your artistic side, even if others don’t believe in you. “Lady Gaga, who has a Pisces Mercury, famously told an ex-boyfriend, who laughed at her dreams of becoming a famous singer: ‘Someday, when we’re not together, you won’t be able to order a cup of coffee at the f–ing deli without hearing or seeing me,’” Ash explains.

A wild imagination is a Piscean hallmark, partially due to their 12th house ruler, which is all about the subconscious mind and the metaphysical world. This allows the water sign to deeply explore their ideas and put their magical ideas onto a page or canvas. In many ways, Pisces zodiac signs are escapists who are able to enter the state of flow that musicians, writers, and creators know all too well.

In modern astrology, Pisceans are governed by the planet Neptune, which rules dreams and the supernatural. “Being ruled by Neptune, Pisces can find themselves prone to daydreams, vivid imaginations, and a propensity to wax poetic,” astrologer Meghan Rose tells Bustle. “These traits all make it very easy for Pisces to tap into their heart space and let their creative and emotional juices flow on the daily.” Writers, musicians, and painters alike need to be constantly inspired, and for the watery Pisces, their muses include their emotions, imagination, and everything related to magic and the supernatural.

Pisces’ modern planetary ruler isn’t the only factor in their star power. “Pisces is also traditionally ruled by Jupiter,” explains Ash. “Jupiter in the natal chart represents the urge to expand, explore, where one tends to chase their dreams (for better or worse!). With Pisces sitting in Jupiter, it can give an added edge to manifesting and claiming your dreams.” Artists are always in pursuit of their magnum opus, which is the kind of mindset that meshes well with an ever-evolving zodiac sign like Pisces.

Because Pisces is part of the mutable group, they can juggle different responsibilities and can ebb and flow in an environment that’s often unpredictable and demanding. “Pisces would do well to get creative, connect deeply with others, and create the world that they saw vividly before the rest of us had started our first cup of coffee!” Rose explains.

When they’re dreaming and expressing themselves artistically, you can assume Pisces zodiac signs are thriving. The sensitive water signs need an outlet that allows them to be themselves comfortably, or whomever they choose to be that day. That’s why the life of a musician, writer, or another niche area of art would best fit the enigmatic Pisces.