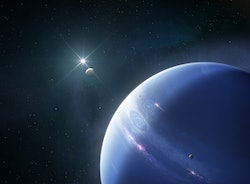 All About Space Magazine/Future/Getty Images
By Brittany Beringer
Feb. 1, 2022

Your sun sign can give you insight into your unique traits, and your zodiac sign’s planetary ruler is what gives your zodiac sign the edge it has. Each planet holds a certain type of energy that influences the zodiac sign that it rules over. In the case of imaginative and ultra-romantic Pisces, it has two planetary rulers to thank for the water sign’s natural flight of fantasy and often heedless optimism. In traditional astrology, Pisces is ruled by Jupiter, while Neptune rules Pisces in modern astrology. The blend of these co-ruling planets gives the mutable sign their striking imagination and unbeatable intuition.

“[Neptune is a] magical planet that feeds our reveries, dares us to spend more time vibing than doing, and provides us with an existential dose of pondering our universe,” astrologer Julia Bray tells Bustle. Jupiter, on the other hand, is related to luck, knowledge, and spirituality.

Since traditional astrology uses only the seven celestial bodies visible to the naked eye — which includes the sun and moon, and the planets through Jupiter — Neptune is only recognized in modern astrology. In traditional astrology, Pisces shares a planetary ruler with Sagittarius — Jupiter, the optimistic planet that gives these signs their rose-tinted outlook on life. When it comes to its modern ruler, Neptune, which rules things like spirituality, it adds a bit of transcendental flair to the creative Pisces.

Whether you’re a Pisces or want to learn more about its co-ruling planets, understanding Neptune and Jupiter can put the rest of your birth chart into perspective. Read on to get the scoop on Pisces’ planetary rulers.

All About Neptune, Pisces’ Ruling Planet

Neptune was discovered in 1846 and is the most distant planet in the solar system. In astrology, Neptune governs all things involving the spiritual dimension, like psychic powers, intuition, and dreams — which speaks to why these fanciful zodiac signs have a reputation for creative and sometimes delusional imaginations. In Roman mythology, Neptune is the god of freshwater, fitting for representing the water sign symbolized by the fish.

“More interested in dream time than reality, Neptune can help us to dissolve our human self into the larger consciousness of the universe to receive spiritual blessings, guidance, and the far-out experience of ecstatic oneness with all of life itself,” Bray explains. “I always call it the ‘spiritual trident of the solar system’—and that wherever it is placed in our chart amplifies our sensitivity and psychic abilities. Without awareness or a willingness to stay grounded in reality, Neptune’s influence can inspire attachments to the dream state that often result in addictive, escapist delusions.”

Because Neptune has significantly shorter days than earth does (it only needs 16 hours to fully rotate), the emotional water sign gets to spend most of their time frolicking in a daydream or traversing the supernatural realm. The frosty giant is associated with delusion and impractical ways of thinking, hence the cloudiness and general confusion you get when Neptune goes retrograde.

With Neptune being linked to the supernatural, it’s no wonder that practicality is too limiting for the transcendental Pisces. The icy giant’s often unrealistic mindset impacts Pisces’ ability to process feelings or situations analytically, keeping them in a constant state of escapism. That’s why Pisces’ shadow traits consist of darker parts of the psyche like deception. On the other hand, Pisces zodiac signs are given the gift to see beyond the earthly plane because of Neptune’s key to the spiritual realm.

But because Neptune is associated with the spiritual plane, it’s not uncommon for Pisces to become disconnected from reality at times. “Pisces needs to learn how to channel their feelings in healthy ways or else they run the risk of dissociating and abandoning their earthly body while they float to a fantasy realm to cope with the enormity of consciousness,” explains Bray.

Jupiter was aptly named after the Roman “King of the Gods” in mythology. In astrology, this planet fittingly rules everything lucky: abundance, prosperity, and fortune. Known as a “Benefic” planet in traditional astrology, auspicious Jupiter is also related to expansion and learning, urging constant growth, and a thirst for knowledge.

“Jupiter is the largest planet in our solar system, and a cosmic force of growth, expansion, joy, and good fortune,” Bray explains. “It represents our capacity to believe in ourselves and the world — wherever it's placed in our chart can help us understand the natural gifts we are blessed with, and ways we can take risks to share our bounty. Jupiter bestows us with the effortless reminder that abundance exists in the universe, and helps us to attune our beliefs to the hope and ease that this planet promises.”

Like Sagittarius, known for its look-on-the-bright-side way of life, Pisces zodiac signs are blessed with Jupiter’s ever-expanding knowledge and share a quest for something more. Jupiter gives Pisces the fluidity they need to adapt to different surroundings, but mainly, Jupiter’s influence on Pisces centers around their belief system.

“Jupiter brings a larger-than-life quality to Pisces’ faith, helping to push their dreams to the edge of reality and beyond. Jupiter's amplification can sometimes exaggerate or heighten Pisces’ feelings, which can add to their sensitivity, and often contribute to an unfortunate sense of overwhelm. It's important [for Pisces] to remember that bigger isn't always better unless it can be grounded in compassionate service to the self and others,” explains Bray.

Between Neptune sprinkling magic into the Pisces persona and Jupiter giving the water sign a splash of optimism, it’s no wonder why Pisces zodiac signs are typically comfortable in the spiritual realm, even if others don’t understand.

More like this
Here’s Your Fourth Of July Weekend Horoscope
By Mecca Woods
Your Guide To Earth Signs
By Nina Kahn
Eleven From ‘Stranger Things’ Is A Cancer Zodiac Sign, An Astrologer Says
By Brittany Beringer
4 Zodiac Signs That'll Have The Luckiest July
By Brittany Beringer
Get Even More From Bustle — Sign Up For The Newsletter