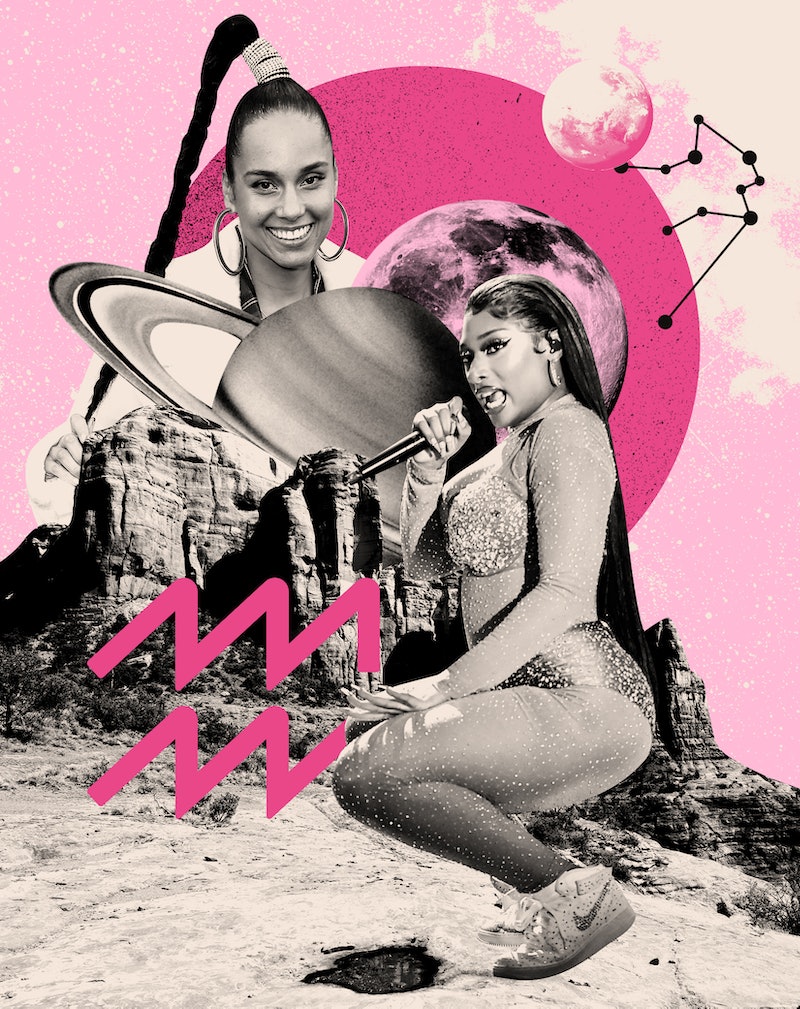 Sharing a zodiac sign with someone doesn’t necessarily mean you’re destined to have a dynamic connection. In fact, some of the zodiac’s water bearers feel like January Aquarians and February Aquarians may as well be pouring from two completely different cosmic jugs. Of course, everyone’s cosmic profile is unique, and the placement of the major points and planets in our charts will vary depending on the day, year, and minute that we’re born. But do the apparent differences between a January Aquarius and a February Aquarius have any actual basis in astrology? In short, yes — but it’s complicated.

From an astrological perspective, it’s not surprising that people with the same zodiac sign might still have completely different personality traits, as our sun signs are only one small sliver of the vast expanse of our birth charts. So even though everyone born between approximately January 20 and February 18 is an Aquarius sun, their charts might look totally different when it comes to things like moon, Mercury, Venus, Mars, and rising signs. All Aquarians share some core Aquarius traits, but there can be major variations in the way they communicate, conduct relationships, chase their goals, and express their feelings, depending on their exact birth details.

However, there’s another important astrological factor that can set January Aquarians apart February Aquarians, which is that each zodiac sign is divided into three subdivisions called decans. These groupings alter and influence the way a sign’s energy manifests, and they’re determined using the degree of your sun sign (which you can find by checking your birth chart). Because each sign spans 30 degrees on the zodiac wheel, the first decan is comprised of the 10 degrees of a sign, the second decan is the next 10 degrees, and the final 10 degrees make up the third decan. The sun moves through the zodiac at a rate of about one degree per day, so this means almost all January Aquarians are first decan Aquarians (with the exception of those born around the very last day of the month), while all February Aquarians will fall within either the second or third decan.

Let’s explore the differences between January Aquarians and February Aquarians through the lens of astrological decans, as this traditional concept can give us a forward-thinking and personalized look at the zodiac’s resident fixed air sign.

Aquarius is the sign ruled by Uranus, planet of unexpected changes and sudden strokes of genius — and most January Aquarians (aka first decan Aquarians) are ruled solely by this quirky planet. However, second and third decan Aquarians (mostly born in February) each have a secondary planet influencing the way they express their Aquarius zodiac energy. Because January Aquarians are entirely Uranus-ruled, they usually possess the most textbook Aquarius qualities — such as being eccentric, unpredictable, and full one-of-a-kind idiosyncrasies that make them stand out from the crowd.

As one of the air zodiac signs, Aquarians are naturally interactive people who love to express their ideas and connect with others. After all, Aquarius is the sign associated with friendship! But because most February Aquarians are co-ruled by either communication planet Mercury or relationship planet Venus, they tend to be more social, extroverted, and partnerships-oriented than your average water bearer. All Aquarians enjoy being surrounded by an engaged community, but those born in February thrive when it comes to having one-on-one conversations and fostering more intimate relationships.

3. January Aquarians Are The Most Rebellious

Aquarians are natural-born rebels who live life by marching to the beat of their own unique drum. But no one’s willing to fly their freak flag quite as freely as a January Aquarius. As first decan Aquarians who are arguably blessed with the largest amount of Uranus’ weird and revolutionary vibes, these unconventional people can’t help but challenge the status quo and laugh in the face of tradition. They don’t like being told what to do and prefer to stray from what’s mainstream, even if that means inventing a totally new method of doing things.

As a fixed air sign, Aquarius’ talents lie in carrying ideas forward and building sustained connections between groups of people. And while they’re certainly not afraid to be unorthodox, they can also be quite stubborn and self-righteous about what they want. But because second decan Aquarians (almost all of whom are born in early February) are co-ruled by mutable planet Mercury, they tend to be a more flexible and open-minded about things. This fleet-footed planet has a quick tongue and can think on its toes, so these February Aquarians are better able to go with the flow without putting up a fight.

5. January Aquarians Will Keep You On Your Feet

Aquarius is the most forward-thinking sign of the bunch, an anyone born under this sign is likely to be a non-conformist with lots of out-of-the-box ideas. But because January Aquarians are solely ruled by innovative planet Uranus, they’re arguably the most unpredictable of the bunch. These creative people like to keep things fresh and funky, and they’re always focused on their out-of-the-box visions of the future — which means you never know what kind of sudden decision they’re going to make or what wildly genius idea they’re going to share next.

6. February Aquarians Are More Forward About Their Feelings

Aquarius zodiac signs have a reputation for being the most cool, calm, and detached of the cosmic bunch. Their objective perspective on life helps them to see situations clearly and form logical plans, but it can sometimes hinder them from listening to their heart. But because second decan Aquarians (all born in mid-February) are co-ruled by romantic planet Venus, being emotionally open and in touch with their feelings feels a bit more natural. These Aquarians usually have an easier time being vulnerable and embracing their sensitive sides.

More like this
These Are The 3 Most Mellow Zodiac Signs
By Kristine Fellizar
Are Capricorn & Aquarius Compatible In A Relationship? Astrologers Weigh In
By Kristine Fellizar
Here’s Your Daily Horoscope For December 6, 2022
By Mecca Woods
Here's How The December 2022 Full Moon Will Affect Your Zodiac Sign
By Nina Kahn
Get Even More From Bustle — Sign Up For The Newsletter