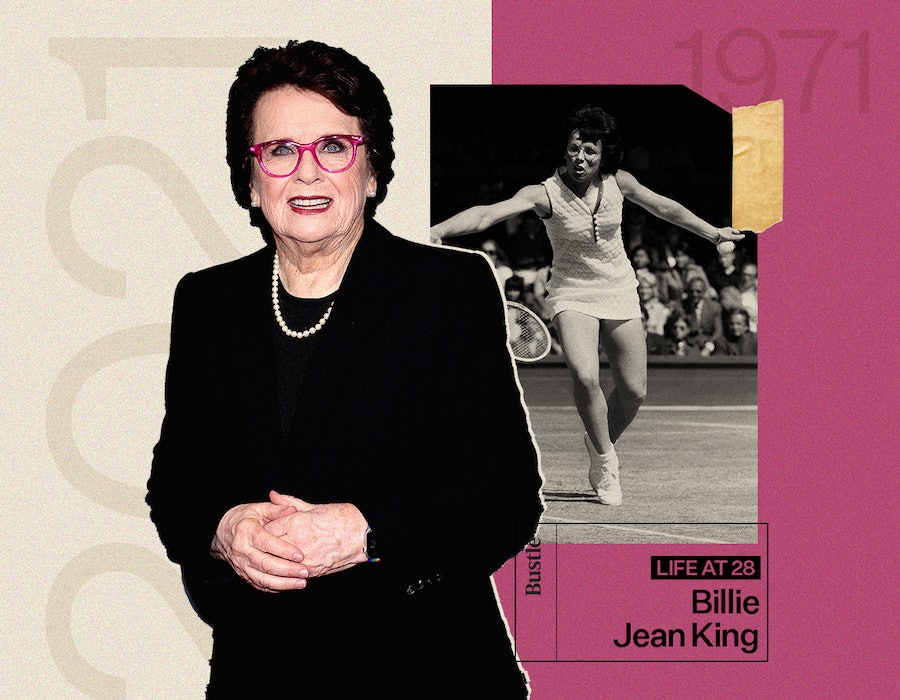 In Bustle’s Q&A series 28, successful women describe exactly what their lives looked like when they were 28 — what they wore, where they worked, what stressed them out most, and what, if anything, they would do differently. This time, Billie Jean King reflects on her best year in tennis.

Billie Jean King starts her day not with tennis, but a gratitude list. “I think I’ve lived a very privileged life,” King, 77, tells me. She delivers this information matter-of-factly, sharing a story about hanging out with Muhammad Ali and extolling meditation’s benefits in the same tone of voice.

Her life today, no matter how cooly she describes it, is the result of an extraordinary leap of faith she took a half-century ago. The year she turned 28, King became the first-ever female athlete to earn over $100,000 in a season; she was able to do this because the year prior, she and eight other female tennis players had signed a symbolic $1 contract to protest pay disparities in men’s and women’s tennis. Imagine the pearl-clutching over Naomi Osaka refusing post-game press at the French Open, but with the added wrinkle that women’s professional tennis as we know it literally did not exist.

“Every time a woman gets a check [in tennis],” King says, “is because of that moment when we were willing to give up our careers.”

Instead, they flourished. King’s late 20s would also see her crush Bobby Riggs in 1973’s famous Battle of the Sexes. But privately, the Long Beach, California, native was struggling with her sexuality and disordered eating. Her new autobiography, All In, balances these facts with the other defining moments of her life, like her childhood cognizance of racism in tennis (“Everyone who’s playing is white, wearing white shoes, white socks, white clothes to play with a white ball. I’m going, where is everybody else?”) and her relationship with her wife, Ilana Kloss.

But amid a lifetime full of achievements, King’s 28th year stood out. Here, she tells Bustle about what a weekend out looked like, what brought her joy, and what she wouldn’t have done differently 50 years ago.

In your new book, you write that anytime someone asks you about the ’70s, you remember being tired. Was there anything about being 28, specifically, that you recall?

It was probably the best year I ever had in tennis. That year, I won three Grand Slams — the French Open, the U.S. Open, and Wimbledon. If I had gone to the Australian Open, I would have had an excellent chance to have won all four.

One of my big question marks from that year is that I don’t know how good a player I could have been because I was working so hard off the court. I was always going to sponsorship meetings and getting the players organized. I’d have meetings until 4 a.m. sometimes. I might finish a magazine interview at 2 a.m. because the interviewer had to wait until after our doubles matches. I’d talk to them for an hour, get a few hours of rest, and then have to do a radio show at 6 a.m.

I imagine you didn’t have tons of free time, but what would a typical weekend night look like for you?

I liked to go dancing, unless I was playing the next day, since I’d have less spring in my legs. Or I’d just relax with a few people — one-on-one, or maybe up to four people. I’m very big on intimate settings. Maybe I’d go to a concert — the Rolling Stones, Roberta Flack, Motown. I once went over to Canada to see Diana Ross and the Supremes.

Aside from your trademark glasses, what was your go-to outfit that year?

I wore a white lace dress on court that I loved and a peace sign necklace almost everywhere I went.

What’s something that brought you joy at 28?

Well, the people in my life brought me joy. I tell everyone when they’re young, relationships are everything — your relationship with yourself, with your faith, with your family, your friends, whatever. If [my childhood friend] Susan Williams hadn’t asked me to play tennis in fifth grade, I would have never been a tennis player. You just never know how someone’s going to touch your life or how you’re going to touch their life.

It’s like how without your work, tennis as we know it wouldn’t exist. To me, you pushing for pay parity planted the seeds for Naomi Osaka putting her mental health over playing Wimbledon this season. What did you think of that?

When you want to play tennis at that level, you kind of know the deal. Pressure is a privilege. Very few people get to experience being out at Centre Court at Wimbledon, but when you don’t feel good, or you’re full of anxiety, it doesn’t really matter. So you do need to take a break. I think it’s important that she take care of herself. When I finally got therapy in my 50s, that was when things got better for my life. [I went for] my eating disorder, my sexuality — that was my toughest struggle for sure, without any question. I had years of therapy. I wish I had gone as a young person, but in my day it wasn’t OK.

Is there anything else you would have done differently at 28?

I probably would not have done too much differently because I was told if I talked about my sexuality, we might not have had a tour. So that’s not just about me, is it? In the ’70s, it was very different than it is now. Now, if you come out, you’re celebrated. When I came out [in 1981], I lost everything overnight. It took me 20 years to recover financially.

I also wasn’t sure about myself at the time. Because I’ve been married to a man and a woman, I think it gives my perspective on life. It’s not as different as people think it is. It’s all the same challenges, same problems, the same personalities.

Any pieces of parting wisdom?

More like this
The 19 Best Tweets & Memes About Bisexual Awareness Week
By Lexi Inks
Think Your Partner Is Cheating? These Tarot Cards May Confirm Your Suspicions
By Kristine Fellizar
Your October 2022 Monthly Tarot Reading
By Jezmina Von Thiele
The Temperance Tarot Card Wants You To Connect With Yourself
By Kristine Fellizar
Get Even More From Bustle — Sign Up For The Newsletter