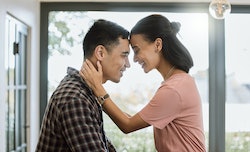 When the Cancer crab and Pisces fish finally find each other, these two Water signs will never want to let go. But does a strong initial attraction lead to happily ever after with this couple? Cancer and Pisces relationship compatibility has everything you should know about this Water sign duo.

“In many ways, the Cancer-Pisces relationship is a fairytale romance, which can either be their greatest strength, their ultimate downfall, or the reason the relationship never takes off,” Dana DeFranco, astrologer and co-host of the Allegedly Astrology podcast, tells Bustle.

In astrology, Cancer and Pisces trine each other, meaning they’re situated 120 degrees apart in the zodiac wheel. According to DeFranco, trines are harmonious aspects that occur between signs of the same element. There’s a good flow between them, and they tend to get along without really trying. But many times, trine aspects can lead to complacency, which is the potential downside of this type of connection.

But as Water signs, they represent the emotional and intuitive experiences in life. “It’s impossible for them not to care, even if they aren’t showing it,” DeFranco says. They tend to be pretty in tune to their partner’s emotions as well. So if one partner feels like something is off, they will do whatever they can to turn things around. Read on to learn more about Cancer and Pisces relationships.

Sexually, Cancer and Pisces are compatible. At the start, they’ll capture each other’s attention immediately. "They have a watery intuitive rapport that’s difficult to match, and it’s super exciting to watch both try to impress the other with style and variety,” astrologer Clarisse Monahan tells Bustle.

They’re both yin signs, which means they’re easygoing and relaxed. “There can be a deep intimacy in their lovemaking, however, as they are lacking in Mars and fire energy, it may be missing a bit of spark,” Monahan says. But if they’re looking for a partner who touches them on a deeper level, they’re sure to find that in each other.

For both Cancer and Pisces, sex is best when it’s slow, sensual, and romantic. “Pisces helps Cancer feel present in their bodies and Cancer’s unwavering devotion provides evidence that some of Pisces fantasies can, in fact, become their reality,” DeFranco. When they’re both in sync, this pair can have “mind-blowing” sex.

As two Water signs, Cancer and Pisces feel most at home when they’re in deep emotional waters. According to Monahan, this is the level they tend to be on from their first meeting, even if they don’t express the depths of their feelings out loud.

“Pisces is Neptune-ruled so they’re extremely susceptible to fantasy and projection,” she Monahan says. “Meeting someone who seems to understand their sensitive and empathic nature is a big turn on, and Cancer can tune into that Piscerian wavelength very easily.”

On the plus side, both Cancer and Pisces value relationships. Pisces is known for being the zodiac’s biggest romantic, while Cancer is the biggest nurturer. If these two are 100% committed, they will give their all to making a relationship work.

But Cancer can be a bit guarded with their feelings until they feel like they have the level of commitment they want. Pisces, on the other hand, falls in love at first sight and goes all-in right away. “In order for this relationship to get the ball rolling, Cancer needs to surrender control and give Pisces the opportunity to see their vulnerable side — i.e. they need to come out of their shells just enough to speak up and tell Pisces they like them,” DeFranco says.

And if they aren’t fully ready for the reality of being in a relationship, Pisces zodiac signs have a tendency to run away. When this happens, Cancer will be turned off to the connection completely.

Once they’re in a relationship, these two may need some time to adjust. According to DeFranco, both signs tend to play emotionally supportive roles in their other connections and are more used to giving love than receiving it. Once they’ve made the necessary adjustments, these two have what it takes to develop a strong bond.

Communication between Cancer and Pisces is emotional, deep, and loving. According to astrologer Theresa Reed, they both speak from the heart and are excellent listeners. “This means they can give each other the emotional support they crave,” she says.

They can both be moody water signs from time to time, however, which can lead to misunderstandings. If either side is feeling off or upset, Reed says a cooling off period can provide objectivity. “It’s something that’s hard for these sensitive souls!”

When it comes to friendship, these two watery creatures get along “swimmingly well,” Reed says. Pisces is ultra-sensitive, which may be off-putting to some. But with Cancer, that’s not an issue because the crab is the same way. Since they’re both in tune to their emotions, they’re able to develop a deep bond quickly.

“This empathic duo allows each other the freedom to share their feelings, which builds trust,” Reed says. “Both want to be needed as well, so they may take turns playing the supporting role in the friendship. Of all the signs in the zodiac, Cancer is the one who truly ‘gets’ Pisces and vice versa. A deep, caring relationship is only natural between the Crab and the Fishes!”

But every friendship has their share of problems. With Cancer and Pisces, there’s a tendency for both of them to become codependent. “While it’s beautiful to have profound emotional connection with someone, once it starts heading into neediness, the friendship could become suffocating for both parties,” Reed says.

It’s important for them to have some breathing room so they can have a strong connection that’s still healthy. “As 38 Special sang: ‘Hold on loosely, but don’t let go.’ That’s wise advice for these Water signs,” Reed says.

The Biggest Problem In A Cancer & Pisces Relationship

So what relationship problems will a Cancer and Pisces relationship combo face? Cancer is a sign that values stability, so if their partner shows inconsistency, it may trigger their insecurities. When that happens, they can get moody and passive-aggressive. Pisces also have a tendency to be forgetful and a little chaotic. According to Monahan, Cancer may find Pisces a little too flakey and Pisces may find Cancer temperamental at times.

Fortunately, these things aren’t major deal-breakers. Cancer needs a lot of reassurance in relationships, and Pisces is more than happy to give that to them. As a Water sign, Pisces also has a good grasp of how Cancer’s moods work and can respond in the right way. Although they may get annoyed with Pisces from time to time, Cancer will help to ground their partner.

Overall, this duo is considered to be a compatible zodiac match. According to Monahan, harmony is important for both of these signs so it tends to be a compatible couple in the long-run. As long as they don’t get complacent with each other, this relationship has what it takes to last.

More like this
Libra & Aquarius Can Be Great Together, As Long As They Do One Thing
By Kristine Fellizar
Why A Libra & Libra Couple Might Become Codependent
By Kristine Fellizar
Think Your Partner Is Cheating? These Tarot Cards May Confirm Your Suspicions
By Kristine Fellizar
Here’s Why Sagittarians Should Pursue A Career In Academia
By Nina Kahn
Get Even More From Bustle — Sign Up For The Newsletter