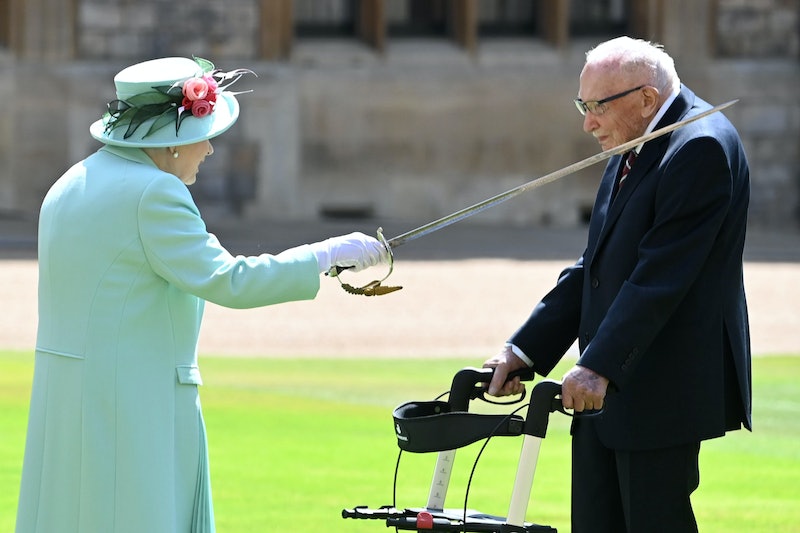 Captain Tom Moore captured the heart of the nation when he decided to mark his 100th birthday by walking laps of his garden to raise money for the NHS. With the total amount raised surpassing a staggering £33 million, the war veteran – who has since been described as "one-man fundraising machine" and a hero – rang in his 100th year with a promotion to honorary colonel of the Army Foundation College in Harrogate, and has even sparked rumours of an appearance in the lauded John Lewis Christmas advert for 2020. Now it seems his efforts have been truly cemented in stone as Captain Tom Moore has been given a knighthood by the Queen.

The intimate ceremony honouring Captain Sir Tom's heroic fundraising efforts took place in person, outdoors in the quadrangle at Windsor Castle, where the Queen has been self-isolating with Prince Philip since March 19. Captain Sir Tom was joined for the ceremony by his daughter Hannah Ingram-Moore, his son-in-law Colin Ingram, and his grandchildren Benji and Georgina.

The army veteran, who originally aimed to raise £1,000 for NHS Charities Together by completing 100 laps of his garden before his big birthday, was nominated for a knighthood in May by Prime Minister Boris Johnson.

On announcing the conferment of the honour on May 20, the PM described Captain Sir Tom Moore as “a true national treasure” who had provided the country with “a beacon of light” during the COVID-19 pandemic.

In a message shared with fans on Twitter ahead of the ceremony, Captain Sir Tom said he “could never have imagined this would happen” and followed up his words by saying "#FridayWillBeAGoodDay".

It looks like Friday was a very busy day for the Queen as not only did she conduct Captain Sir Tom Moore's knighting ceremony, but she also attended the wedding on her granddaughter Beatrice, which took place in private at The Royal Chapel of All Saints at Royal Lodge, Windsor, earlier that day.

More like this
Iran Has Issued A Death Sentence Over Mahsa Amini Protests
By Catharina Cheung, Darshita Goyal and Maxine Harrison
Heinz Just Relaunched A Bean-Tastic '90s Fave
By Sam Ramsden
Footballer Jake Daniels Shared His Thoughts On A World Cup Boycott
By Sam Ramsden
Mollie King & Stuart Broad Just Shared The First Pic Of Their Baby
By Sophie McEvoy
Get The Very Best Of Bustle/UK