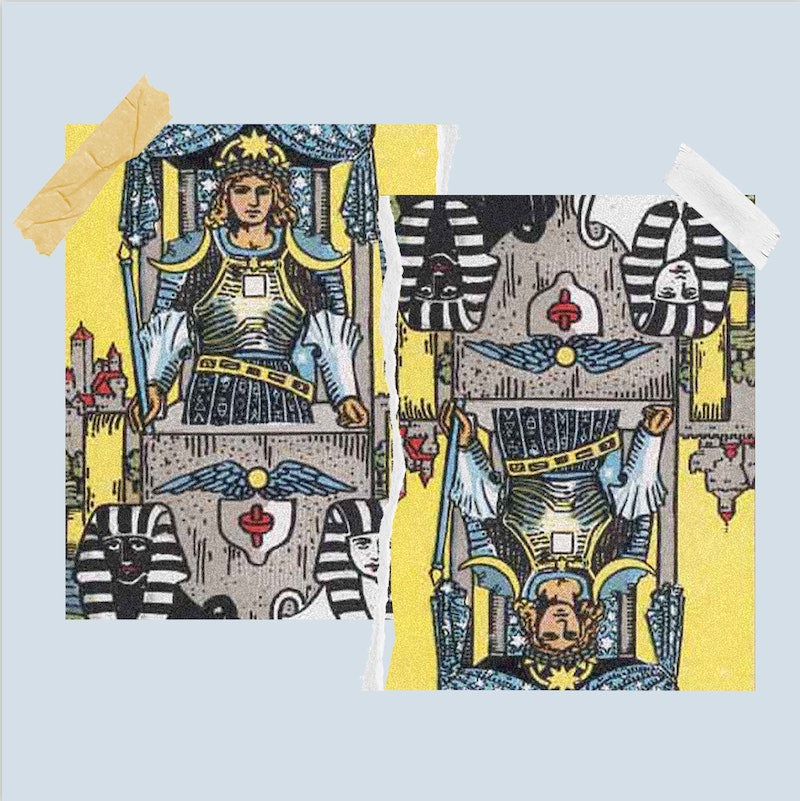 Rider-Waite Tarot
By Kristine Fellizar
May 6, 2022

Tarot is a fascinating way to gain insight into questions you may have about your life. While some may consult the tarot to learn more about a relationship situation, others may use it to receive messages from spiritual guides when they’re feeling stuck. If you get a reading done by a professional or you have a deck and you’ve been pulling cards for yourself, you may have come across the Chariot card. If you’re in the middle of making a big decision, pulling the Chariot tarot card means you’ll get some clarity.

“When I pull the Chariot, I always feel it means that a person should move on and energetically shift your attention towards the future,” Stina Garbis, an astrologer and professional psychic who does regular tarot readings on TikTok, tells Bustle. “Destiny is in your own hands and our decisions are our own. So when I get the chariot I feel as if it’s time to make the hard decisions, and when we do everything will change for the better.”

If you keep getting the Chariot card in your readings, here’s what you need to know.

What Does The Chariot Tarot Card Mean?

It’s important to note that each reader interprets tarot cards in their own way, so you may get slight differences from one reader to the next. But in general, the Chariot is associated with forward movement. According to Jill Loftis, astrologer and tarot expert, it’s a card that comes up when someone is ready to take that next big step but hasn’t done so yet.

“I always think of the Chariot as being ‘all dressed up and not going anywhere,”’ Loftis says. “You've done the work; but why are you not moving forward? The Chariot indicates you may need to recommit yourself to a project or relationship, stop making excuses, or be ready to accept the attention and success that’s coming your way.”

In the tarot, the Chariot comes right after the Lovers. As Loftis tells Bustle, many associate the card with the zodiac sign of Cancer due to the protective armor seen around the figure in the standard Rider–Waite tarot deck, similar to the crab’s hard shell. But Loftis says the Chariot actually has more of a Sagittarius-type of energy.

“It’s this idea of being prepared for an adventure, or even possibly a battle,” Loftis says. “The [person] in the card clearly has some status or position and a Chariot is used to go longer distances. Sagittarius being a Jupiter-ruled sign feels logical as far as the opulence of the symbols.”

What Does The Chariot Card Mean When It’s Upright?

When the Chariot shows up in a reading upright, it’s the green light for you to take that next big step forward. According to Garbis, this could mean moving on from a relationship or even physically moving to a new location. “The androgynous sphinxes of day and night combine forces to carry this chariot forward and indicate that all gears are in order to make things happen at this time. Your divine feminine and masculine, and your positive and negative sides are in harmony and it’s time to gather your wits, and get up and go.”

This is a great card to come up when you’re in the middle of making a decision. If you’re asking the tarot about your relationship, a possible career shift, or even a move, getting the Chariot upright means you’re ready to go. All blockages you may have experienced will be cleared and it should be smooth sailing ahead. Since the Strength card follows the Chariot, Garbis says the decision you made will be solid.

What Does The Chariot Card Reversed Mean?

When you pull a tarot card in reverse, many readers will interpret that as the opposite of what the card means. In this case, the Chariot reversed would mean that something may be stalled.

“When the Chariot card appears reversed, be sure to take the time to double check your details and level of preparedness,” Loftis says. “There might be something that has been overlooked, or you might not be as ready as you think you are.”

More preparation or research may be needed before you move forward. For example, you may think you’re ready put your new project out there into the world. But if you get the Chariot card reversed, it may not be the right time to fully launch and you may have to do a little more work first.

More like this
The Hanged Man Tarot Card Meaning, Explained
By Kristine Fellizar
The Sun Tarot Card Meaning, Explained
By Brittany Beringer
Here's The Spiritual Meaning Of The May 2022 New Moon
By Nina Kahn
Rihanna & A$AP Rocky’s Astrological Compatibility Proves They'll Be Amazing Parents
By Nina Kahn
Get Even More From Bustle — Sign Up For The Newsletter