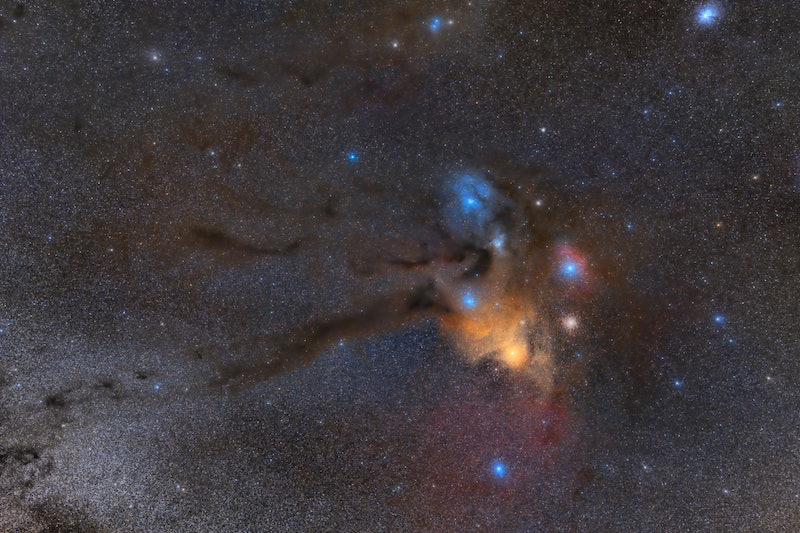 If you follow astrology, you may have heard some whispers regarding the existence of a potential 13th zodiac sign called Ophiuchus. Before you start to freak out about what your new zodiac sign is, know that this isn't the first time this astrological maverick has popped up on our timelines. Let's break down the drama and find out exactly what's up with Ophiuchus, the alleged 13th zodiac sign — and whether the theory that it should be factored into modern day astrology has any validity.

The cosmic confusion about Ophiuchus being the 13th sign appears to have originated in an old viral NASA article written for children. It claimed that based on the location of the constellation Ophiuchus, the zodiac wheel should actually include 13 zodiac signs instead of 12 — and that 13th zodiac sign would be Ophiuchus. The same article claimed that because of the earth’s tilted axis, the entire zodiac calendar should be readjusted, which would change most people’s zodiac signs entirely. The original NASA article on Ophiuchus was updated in 2021, and no longer discusses the inclusion of a 13th sign — but the zodiac-warping sentiments that sent astrology fans into shock is still available to read on NASA’s Tumblr.

So how many zodiac signs are there? What’s my zodiac sign? Have we all been reading the wrong horoscopes all along? Let’s take a deep breath. Before you enter an astrological identity crisis, it’s important to note that this information is based on astronomy, not astrology — Ophiuchus currently has no place in the world of western astrology. However, the idea that there might be 13 zodiac signs has certainly captivated people, so let’s explore the mythology behind Ophiuchus and how it may (or may not) factor into the zodiac wheel as we know it.

While most astrologers dismiss the theory that Ophiuchus could be the 13th zodiac sign, there’s still an astronomical basis to the viral article that started the drama. Ophiuchus is indeed a real constellation that’s aligned with the earth’s ecliptic, and it’s nestled between the constellations that correspond with Scorpio and Sagittarius in the astrological zodiac wheel. Because the sun technically appears to travel through this constellation each year, some people wonder if it should be given a place in the zodiac.

However, astrology and astronomy are two very different fields of study, and not all constellations are considered zodiac signs. In fact, Ophiuchus was knowingly omitted from the zodiac wheel by ancient Babylonians in order to align the number of signs to the number of months in the year. Because tropical astrology — which is the branch of astrology practiced most prevalently in the western world — is based on these teachings, Ophiuchus is not acknowledged as an astrological concept and the zodiac sign dates remain the same as they always did. In other words, your sign hasn’t changed.

That said, there are other branches of astrology — like sidereal or Vedic astrology, for example — that view the zodiac differently that we do in western astrology. If you were to look up your sidereal birth chart, you may indeed have a different zodiac sign than you originally thought, and that’s because this form of astrology factors the earth’s tilted axis into its astrological calculations. There are even some sidereal astrologers who are open to the concept of Ophiuchus joining the zodiac (although it’s important to note that it’s still not a widely accepted theory in any branch of astrology).

What Are Ophiuchus Personality Traits?

Ophiuchus isn’t a zodiac sign, but let’s explore its mythological astro profile, just for fun. If Ophiuchus were to be treated as a zodiac sign, it would account for about 18 days of the sun's cosmic residency throughout each year, based on the location of its constellation. This means that anyone born between approximately November 29 to December 17 would have Ophiuchus as their zodiac sign instead of Sagittarius.

Ophiuchus is represented by the symbol of a snake handler or serpent, and is associated with the mystical healer Asclepius, the Greco-Roman god of medicine. Because its constellation is squeezed between Scorpio and Sagittarius territory, it’s believed that the personality traits of Ophiuchus may be influenced by its zodiacal neighbors. Like Scorpios, Ophiuchans are believed to be intense and magnetic, with a powerful presence and a slight jealous streak. And like Sagittarians, they're also thought to be passionate, energetic, and naturally blessed with good luck. Some astrologers have even made guesses as to which zodiac signs might be compatible with Ophiuchus and what element Ophiuchus could be ruled by in astrology — but at this point it's all speculation.

Why Can’t We Just Add Ophiuchus To The Zodiac?

In currently accepted astrology, there are only 12 zodiac signs, and there are no new zodiac sign dates to track. And while some people might think that adding a 13th sign to the mix wouldn't be a big deal, astrology is a complex system that relies heavily on math and balance — so suddenly applying an extra sign to the zodiac wheel would realistically require a ton of consideration.

There’s a reason that ancient Babylonians developed their version of astrology in the way that they did — and why it works so well. Having 12 zodiac signs instead of 13 divides the zodiac wheel evenly, and it perfectly aligns to the 12 months of the year, the 12 houses of the zodiac, and the four meteorological seasons (as spring, summer, fall, and winter are each made up of exactly three zodiac sign seasons). The 12 signs are also evenly categorized into four astrological elements (with three signs assigned to each), three astrological modalities (with four signs assigned to each), and two astrological polarities (with six signs assigned to each). Suddenly factoring in a potential 13th sign after intentionally omitting it for thousands of years would completely revamp the structure of the zodiac as we know it.

While astrology is certainly an ever-evolving system, most tropical astrologers choose not to factor Ophiuchus into their practice. "There’s no element that Ophiuchus has been assigned to, so [it doesn’t] fit into the world of astrology as we know it," astrologer Lisa Stardust tells Bustle. "The constellation may exist, but being that we’re not ready to embrace this yet in astrology, we need to give the idea of the serpent time to settle in."

Why Does The Ophiuchus Rumor Keep Resurfacing?

The Ophiuchus theory continues to pop up and cause people to question what their sign is, despite the fact that many astrologers (and even non-astrologers) have worked to debunk Ophiuchus in astrology. For many people, their astrological birth charts provide a mirror into their identity and a deeper connection to the cosmos — so the idea that they may have been aligning themselves with an inaccurate archetype is an attention-grabbing (and crisis-inducing) one.

As a professional astrologer, I’ve noticed that the Ophiuchus drama tends to resurface most heavily during Mercury retrograde cycles — and astrologically, this timing adds up. Mercury is the planet of communication and information-sharing, so when it retrogrades, it's much easier for misinformation to spread and for things to get misinterpreted. The cosmically-fueled confusion and Mercury retrograde mix-ups might help to explain why this story keeps making it to the top of our feeds.

A lot of people are confused or even distressed over this possible change to the zodiac — but how do you feel? According to astrologers, you definitely don’t need to update your Co-Star account just yet. But astrology is all about interpretation, so if you feel strongly aligned to the alleged Ophiuchus personality traits, then do you, regardless of what astrology tells you. You are who you choose to be, so just keep being your cool, authentic self.

This article was originally published on July 22, 2020