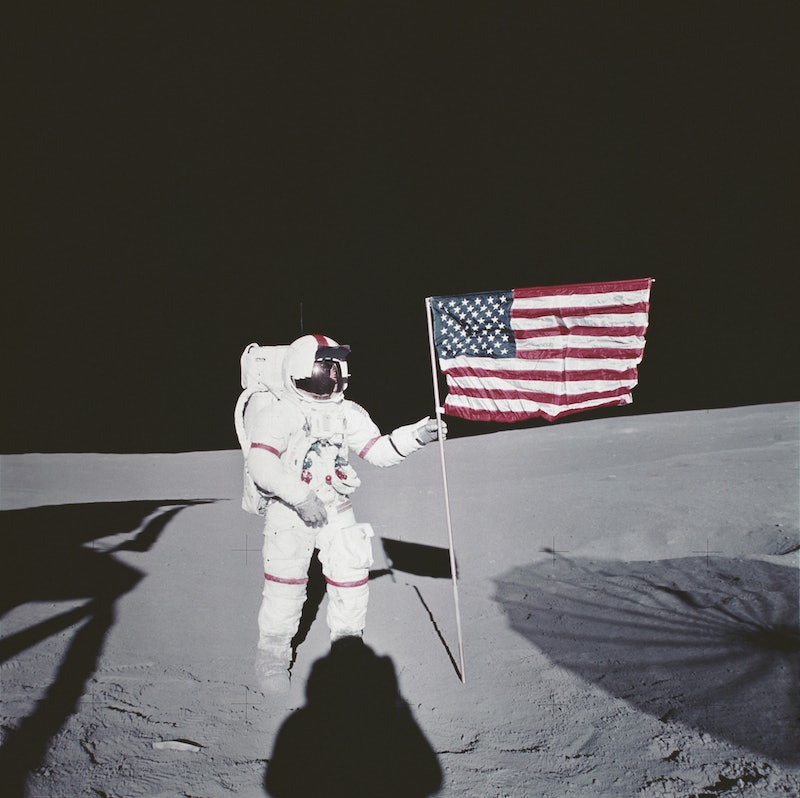 Nothing says a cosmic rebirth like enigmatic Pluto, the power-hungry dwarf planet that symbolizes transformation and renewal. According to the stars, the United States is finally getting a spiritual makeover with its first-ever Pluto Return on Feb. 22, 2022. Astrologically, a Pluto return is when the heavenly body returns to the same position in a birth chart where it was when the chart began. It happens around every 248 years, meaning this is the Pluto return in the United States since the country was founded in 1776.

“Pluto rules death and rebirth, influencing the end and beginning of new karmic cycles. It also rules things like interpersonal skills, power struggles, and shows the source of your personal power. This planet is the portal through which your spiritual and shadow energy is transformed and released into the exterior world,” astrologer Lauren Ash tells Bustle.

Just like ever-elusive zodiac sign Scorpio, which it aptly reigns over, Pluto is a riddle shrouded in mystery. In astrology, this celestial body signifies the death of old traditions, the birth of new ones, and annihilating problematic dogma you’ve come to recognize as part of your DNA. A Pluto return, therefore, spells a metamorphic change in the country’s astrological history as it’s forced to meet the most hidden and not-so-noble parts of itself. It’s a time to air out the grievances, reflect, and completely rebrand.

“Pluto returns are about the ends of empires, the changing of guards, and the transfer of power,” Dana DeFranco, astrologer and co-host of the Allegedly Astrology podcast, tells Bustle. “America has Pluto in Capricorn in the second house of money, property, security, and values. Capricorn is the sign of infrastructure, hard work, and earning your keep. These concepts relate to traditional American values and the American dream.”

If you’re having déjà vu about the astrology of 2020, you’re not alone. Astrologers say it’s all kind of related, though. From the COVID-19 pandemic rocking the country at the start of the Age of Aquarius, to a summer of protests against racial injustice, along with heated tensions of the 2020 presidential election, astrologers believe these events aligned in time for America’s Pluto return.

“Since Pluto is a slow-moving planet, the transit of Pluto can have a 10-degree orb. Therefore, it’s fair to say that the 2020s, in general, have been impacted by America’s Pluto return,” astrologer MaKayla McRae, also known as TheStarryEyedMystic, tells Bustle.

Though change is scary, it’s not necessarily a bad thing. Take, for example, the past year’s rise of the Great Resignation, where workers have decided to say boy, bye to low-paying jobs or toxic work environments in record numbers. This is just one example of a shift in the traditional balance of power between bosses and employees that can usher in a new paradigm — one that is more fair and equitable. This is the kind of society-level change you might see during this roughly two-year period.

What else can you expect from the USA’s big celestial transformation? Keep reading for all the cosmic details you need to prepare for the United State’s Pluto Return 2022.

The Astrological Significance of Pluto

You earn a certain kind of reputation when you’re ruled by the Greek god of the underworld, Hades — the kind that associates you with being controlling, destructive, and obsessive. Think of Pluto as a looking glass that reflects all of your deepest fears, hidden agendas, and most delicious secrets back to you. In astrology, this planet represents power dynamics, control, upheaval, and the pursuit of a deeper purpose.

In your natal chart, Pluto is the placement that represents our shadow self, aka the lesser loved and appreciated parts of ourselves. This planet rules over tough-as-nails Scorpio, who is always in the pursuit of something deeper.

“Modern astrology often prescribes working with Pluto for shadow work and personal transformation for individuals,” says DeFranco. “For nations, countries, and empires, the sign, house placement, and aspects to Pluto in the national chart will relate to power, secrets, cover-ups, generational pathologies, and even what types of subjects are OK to talk about versus what is deemed as taboo.”

What Does Pluto Return Mean?

A Pluto return is the same concept as a Saturn return, which happens when Saturn realigns with your Saturn placement in your birth chart every 27 to 30 years.

“Pluto returns are extremely rare events where a planet transiting in the sky returns to the same exact position it is in an astrological chart,” explains McRae. “Pluto returns don’t happen for people since they can only occur once every 248 years. However, they can happen for countries, corporations, and other long-standing circumstances.”

Although you won’t be able to experience your own Pluto return, it doesn’t mean the event won’t impact you in some way. In fact, it affects the collective significantly. “The United States will experience major shake-ups and changes over the course of the year. Pluto’s transit shows how a generation finds its power to change society. Because Pluto is a generational planet, an entire generation will have the same sign in their Pluto, which gives amplified collective energy to major Pluto transits — such as a Pluto return,” explains Ash.

Astrologers’ Predictions For The Pluto Return In The United States

Is it a coincidence that one of the USA’s most revolutionary astrological moments is happening during the Age of Aquarius — predicted to be an era of radical social change? Cosmically, it makes sense.

“Expect major shifts in America since Pluto is the great revealer, ready to unravel what has been secretly hidden under the surface for far too long. With it being in Capricorn, financial systems, capitalism, laws, leaders, and basically any form of government structure [are] long overdue for a deep change,” explains McRae.

Consider how the past year put new emphasis on working conditions, income (and inflation) inequality, and even the topic of student debt cancellation. With Pluto’s return occurring in Capricorn, you might expect change or shifts in those areas. “Expect major tax reforms to pay for the huge accumulation of the nation’s debt (both associated with Pluto) — especially considering the major conversations around student loan forgiveness and other major debts that impact large generations of people in the U.S.,” explains Ash.

Another area where Pluto’s return could make an impact is in social justice and accountability. “Expect the growing mood of social unrest and reckoning with major inequality between those who ‘have’ and those who do not — leading to social rebellion and change. Pluto is influenced heavily by the collective whole and shake-ups,” Ash says.

The Pluto Return In The U.S. Dates

Astrologers generally agree that the first-ever Pluto return in the United States will happen on February 22, 2022. However, Astrodim, an astrologer with over 36,000 followers on TikTok, says the country has already been experiencing the transit.

“America’s Pluto return technically started November 26, 2008, when Pluto entered Capricorn — which was when Pluto entered the same sign it was in when the USA was created 7/4/1776,” Astrodim says, pointing to the fact that President Barack Obama was elected around the same time. “[His] slogan was ‘change’ and that’s what Pluto is all about!” The February 22, 2022 date marks when Pluto will enter the same exact degree it was in on July 4, 1776, Astrodim says, which was 27 degrees Capricorn.

The question on everyone’s mind, of course, is when the Pluto return will end. Though Pluto heads back to its natal placement once every 248 years, it won’t stay there for too long. "Pluto enters Aquarius for the first time next year on March 23, 2023, and then retrogrades back into Capricorn twice before entering Aquarius for good on November 19, 2024, which will end the Pluto return," DeFranco explains.

How To Prepare For The Pluto Return In The U.S.

Unlike a Mercury retrograde, a transit that specifically affects travel, communication, and technology, a Pluto return is a change that happens on a public rather than an individual level. According to astrologers, while this transit will affect everyone, you’ll notice these shifts taking place primarily in systems and institutions. “Prepare for the external government systems or environment to undergo major shifts and changes,” explains McRae.

Just because things will feel mild on a personal level, you can still brace yourself for these changes by relating these shifts in your life, specifically as they relate to finances. “The best way to prepare is to go with the flow and allow the change to happen. Of course, protect yourself financially, physically, mentally, and emotionally but just know that change is inevitable and needed. Create a ‘save for a rainy day’ plan and practice creating peace in your day-to-day life,” says Astrodim.

The USA’s Pluto return doesn’t necessarily spell destruction, but rather a rebirth, especially when taken in context with the Age of Aquarius’ emphasis on humanitarianism and community. It is a time for endings — specifically, ending problematic systems — and planting new seeds for the future.

More like this
Your Ultimate Guide To Aquarius Season
By Brittany Beringer
Here’s Your Daily Horoscope For February 1, 2023
By Mecca Woods
These 3 Signs Are The Master Chefs Of The Zodiac
By Kristine Fellizar
When Is The Next Full Moon? Your 2022 Calendar
By Nina Kahn and Brittany Beringer
Get Even More From Bustle — Sign Up For The Newsletter
From hair trends to relationship advice, our daily newsletter has everything you need to sound like a person who’s on TikTok, even if you aren’t.