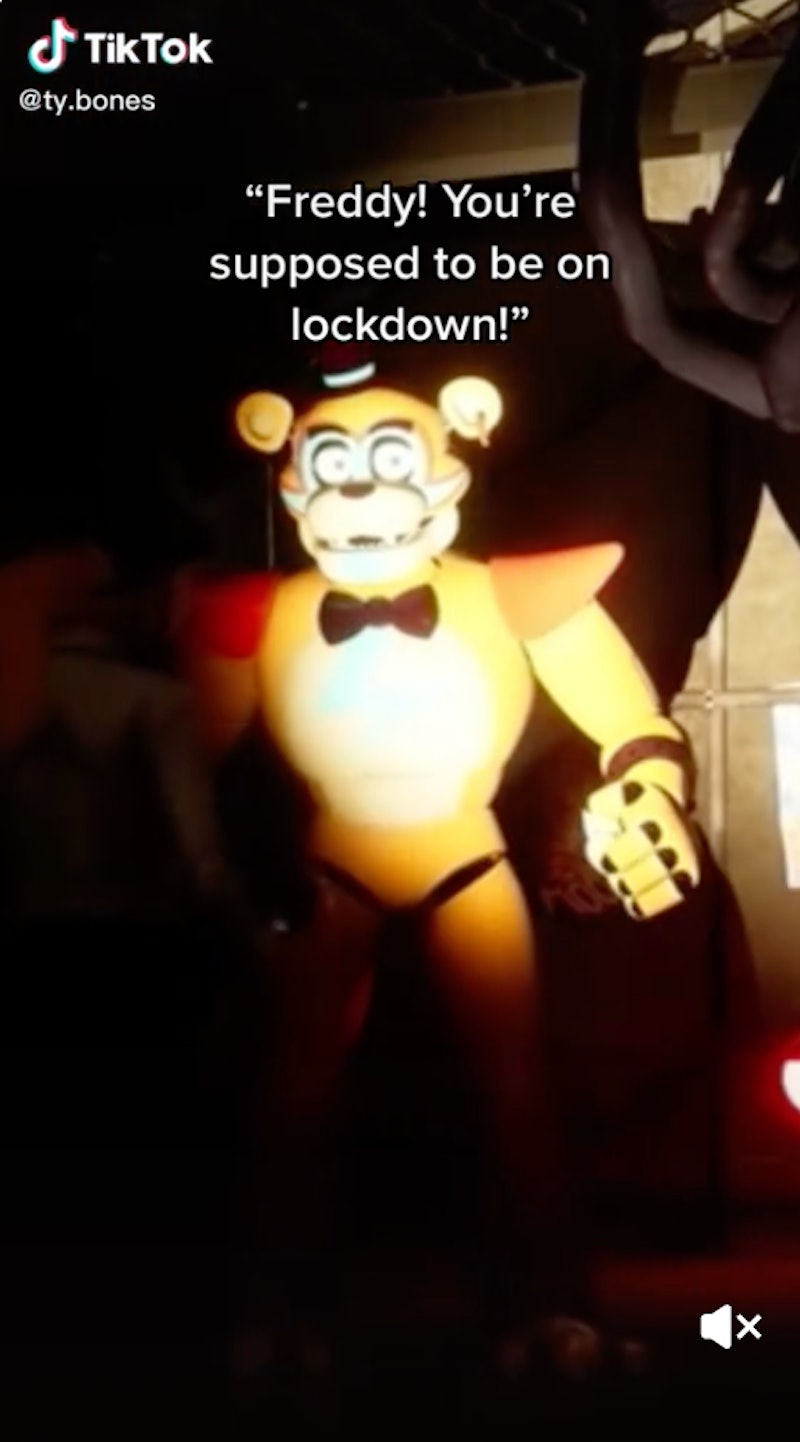 If the phrase, “Freddy, you’re supposed to be on lockdown,” has been playing on repeat as you scroll your FYP, you might be thinking to yourself, “Officer Vanessa, I … I do not know how I got here.” Sure, those who have been TikTok for a bit are probably no stranger to seemingly inexplicable trends finding their way to their hyper-tailored feeds — whether you’ve landed on Elmo and Sea Shanty TikTok, or have been recruited by the gorgeous, gorgeous girls. However, this latest viral sound might be especially perplexing to those unfamiliar with its origins since the video game clip has transcended far beyond Gamer TikTok.

The original sound clip comes from a video game franchise called Five Nights at Freddy’s, and has been used to illustrate interactions where you’ve been caught being disobedient — i.e., breaking lockdown — and give a sassy reply. It’s also been used in totally random meme-ified variations. The hashtag #FNAF (Five Nights at Freddy’s) now has over 33 billion views, and there are hundreds of thousands of videos using the different sound variations — over 100K videos use the popular “Material Girl” rendition, for one example. It seems that the videos began trending around late December 2021, after user @itssampai posted a dubbed rendition of the video game clip.

If Freddy and Vanessa have oddly become household names on your TikTok, despite having no clue who they are, here’s the 411 on the sound and its hilarious variations.

“Freddy, You’re Supposed To Be On Lockdown” Meme Origin

From a quick scroll through some of the videos using “Freddy” sounds, you’ll likely spot some common recurring hashtags like #fnaf, #glamrockfreddy, #freddyfazbear, #fivenightsatfreddy, and #securitybreach.

These are all references to the video game franchise Five Nights at Freddy’s. Centered around the Chuck E. Cheese-esque fictional pizza chain called Freddy Fazbear’s, players must work as a night guard at the pizzeria while avoiding the attacks of animatronic animals. The latest installment, 2021’s Security Breach, introduces a character named Glamrock Freddy — a glam version of the original Freddy Fazbear who works to protect Gregory, a child stuck overnight in a mall from oncoming animatronic attacks. Meanwhile, security guard Vanessa patrols the halls of the empty mall trying to find Gregory.

And so incites the now-iconic scene between Freddy and Vanessa. While the audio from the scene has been the subject of many revamps, the original involves Vanessa discovering Freddy walking about the premises against her permission.

“Freddy, you’re supposed to be on lockdown,” says Vanessa.

“Officer Vanessa, I … I do not know how I got here,” replies Glamrock Freddy.

Thus, a meme is born.

“Freddy, You’re Supposed To Be On Lockdown” Variations

It’s unclear when, exactly, this specific scene from Security Breach first made its way onto TikTok. However, variations of the scene made by user @itssampai especially caused the trend to take off.

In the first variation posted by the @itssampai, the user dubs over Freddy’s original response with a spot-on impersonation, instead saying, “Vanessa, I frew up.” (This is a reference to the meme where users caption photos of various characters standing in a doorway with something along the lines of, “Mom, I threw up.”)

From there, the sound quickly took off. TikTokers began flooding @itssampai’s comments section with new requests for re-dubs, including especially popular references to the viral “Material Girl” TikTok sound and “Bella, where the hell have you been, loca?” Twilight meme.

A large portion of the videos using the trend seem to use @itssampai’s original sounds. Many have even begun putting their own text over Vanessa’s lines, as a way of implementing the sounds in different interactions.

However, other users have tried their hand at Freddy impersonations — or dubbing completely new audio clips over Freddy’s response.

It seems that dubbing memes over the lines of a fictional animatronic bear from a video game is something that can be “For You” for just about anybody — whether you’re a diehard gamer or a Twihard TikToker.