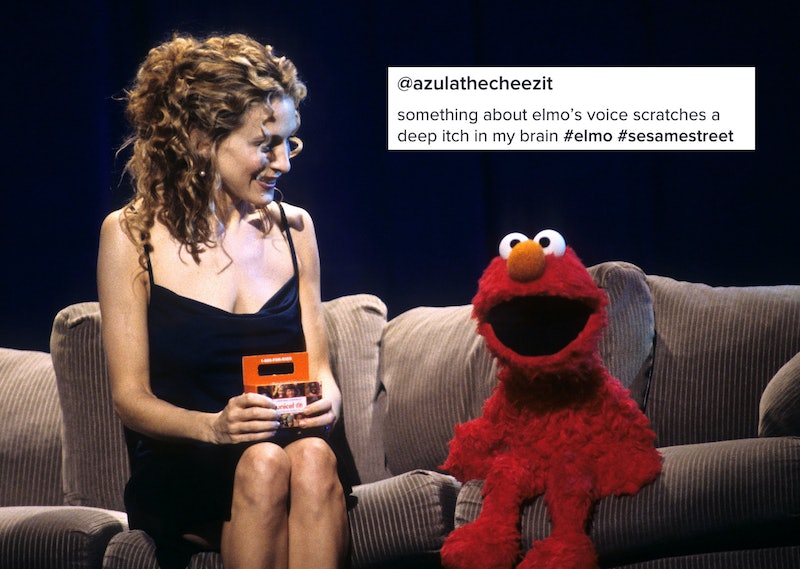 Though the TikTok algorithm that curates your For You Page is often hyper-tailored to your interests, it’s not unusual for your FYP to bring you down some unexpected rabbit holes. Land lubbers found themselves riding the tidal wave of Sea Shanty TikTok, non-New Yorkers have been “Bing Bong”-pilled by Coney Island’s finest, and Gen Z’ers who weren’t even alive to see the 2007 Berries & Cream Starburst ads have been converted into little lads. But, perhaps one of the most peculiar microcosms to arise on TikTok in recent months isn’t that unfamiliar at all. Users have found their For You Page being progressively dominated by random soundbites from none other than Sesame Street’s Elmo. If you’ve landed on ElmoTok, you probably aren’t complaining. But you might be wondering: Why Elmo? Why now?

The Elmo sound that kickstarted the current TikTok craze was posted on Dec. 13, 2021, according to KnowYourMeme. Sharing a clip from a November 2020 episode of Sesame Street, TikToker Chelsey Vogt noted, “The way Elmo says ‘paper towel roll’ has me dying.”

While a few viral Elmo sounds had existed on the app before this TikTok, like the “Bye, Rocco” sound from March 2021 and “This playdate is over!” sound from April 2021, Vogt’s “paper towel roll” clip seemed to kick off the rapid series of sound spin-offs that would become ElmoTok. With over 2 billion views on videos with the hashtag #Elmo, and over 23 million views on #ElmoTok, the niche community is rapidly growing.

Content creator Cristian Dennis says that the children’s television character is likely having a moment on TikTok because of how “relatable” he is. “That type of content always does the best because it can be shared with almost anyone and everyone and we can all get a good laugh at it.” From taking sides in Elmo’s resurfaced feud with Zoe’s pet rock Rocco, to debating Elmo’s New York roots, it seems like nearly everyone on TikTok has relived their childhood nostalgia through some out-of-context Elmo sound bytes.

With over 50 years and counting of Sesame Street footage available, there’s sure to be plenty more meme-able Elmo moments for TikTokers to discover. Here’s a complete guide the most viral sounds of ElmoTok so far.

The “Paper Towel Roll” Elmo sound was likely the first sound to kick off ElmoTok. From a scene in a November 2020 episode of Sesame Street, the clip sees Elmo, Rosita, Big Bird, and Hailee Steinfeld singing about problem-solving when they run out of building blocks.

Looking for alternatives, Rosita presents her options: “An oatmeal container? A wooden bowl?” Next, Elmo adds his trouble-shooting items: “A plastic water bottle and a paper towel roll.” TikTokers especially found humor in Elmo’s pronunciation of “paper towel roll,” which is spoken with much more pizazz than the rest of his lines.

Many TikToks emerged of users lip-syncing the sound with extra energy around “paper towel roll.” However, as the sound progressed, TikTokers used the sound for memes like entertaining babies with household items — and even gifting the items to someone for Christmas.

After “Paper Towel Roll” took off on Dec. 13, TikToker @martha_gvf decided it was time for ElmoTok to expand its horizons to another iconic line read from Elmo: “Elmo chugs along like a train.”

The clip is from a 2017 episode of Sesame Street, in which Jason Derulo completes a musical number with the Sesame Street gang about how easy dancing can be. Showing off his moves, Elmo says, “Elmo’s dance is to fly and zoom like a plane. But, some days, ELMO CHUGS ALONG LIKE A TRAIN!”

Once again picking up due to Elmo’s sudden change in tone to a much more aggressive and excited energy, TikTokers began riffing on the shift by mimicking Elmo’s peaceful, soaring plane dance before jumping into an intense rendition of whatever “chugging like a train” meant to them.

Amidst the initial frenzy of “Paper Towel Roll,” TikToker @miss.nick.c noted a crucial missed opportunity on Dec. 19, 2021. Sharing an earlier portion of the same scene that “Paper Towel Roll” was clipped from, the user noted, “I’m sorry but we’re all missing out on the ‘say what now.’”

The sudden shock that seems to be expressed by Elmo in the clip inspired a series of TikToks in which users mime having a seemingly normal conversation with someone before they are totally thrown off by an out of the ordinary comment. Like, for instance, showing your sister an ElmoTok only for her to tell you that her feed is not filled with Elmo sounds. Say what now?

By Dec. 20, 2021, just a week after the emergence of “Paper Towel Roll,” ElmoTok was officially in full force. “IM SO GLAD ELMO IS GETTING THE RECOGNITION HE DESERVES,” gushed TikToker @brynnawiese before sharing their contribution to ElmoTok.

From a promotional Presidents’ Day 2016 clip posted on Hamilton’s #Ham4Ham ticket lottery series, Elmo observes as Hamilton actor Chris Jackson sings, “The Story of Tonight.” “So, raise a glass to freedom,” Jackson sings, to which Elmo inquires, “A glass of what?” Jackson clarifies, “Apple juice,” and Elmo replies with a gruff, firm, “Delicious.”

In the title of the sound, “delicious” is spelled with a variety of accents on its letters — seeming to poke fun at Elmo’s strange, perhaps borderline demonic, pronunciation of the word.

Most TikTokers kept their use of the sound pretty similar to the original clip, often swapping a few lines to act out scenes of someone getting them their favorite drink, to which they react with intense satisfaction.

Here is where ElmoTok started to grow as heated as St. Elmo’s fire. As Good Morning America reported, Elmo’s feuding with fellow Sesame Street character Zoe’s pet rock Rocco dates back to an episode from 2004. However, amidst a renaissance of exploring Elmo’s unexpected multitudes, TikTokers resurfaced a series of clips involving Elmo and Rocco.

One of the most popular Elmo versus Rocco clips is a clip of Zoe explaining to Elmo that she is saving a cookie for Rocco, so Elmo cannot eat it. Clearly already at his wits’ end at the nonsense of an inanimate object causing so many problems for him, Elmo goes off.

“How? How is Rocco gonna eat that cookie, Zoe? Tell Elmo!” he screams, initiating an Oscar-worthy monologue. “Rocco doesn’t even have a mouth! Rocco’s just a rock! Rocco’s not alive!”

Many TikTokers started using the sound to channel their own fury, acting out different frustrations about nonsensical arguments — from whether it’s OK to crack the spine of a book to playing pretend with a younger sibling for far too long.

Though the feud is decades old, it appears that Elmo might still be harboring some feelings about it. Elmo took to Twitter to release his own statement on the Rocco’s resurfacing, clarifying that he and Zoe have buried the hatchet. As for Rocco? No comment.

Elmo followed up on the tweet a few minutes later, fanning the fames a bit. With over 600,000 likes, it seems as though Twitter might be on Team Elmo.

Elmo versus Rocco isn’t the only feud to go down on ElmoTok, though. On Dec. 31, 2021, TikToker @dollartreeprincehans shared a clip from a 2015 Tonight Show clip in which Elmo instructs Jimmy Fallon, Jason Schwartzman, and Questlove through a cooking segment. Elmo rattles off ingredients like “onions, garlic, celery,” before once again adding his extra Elmo flare to the final ingredient, “balsamic vinegar.” “That’s a big word for Elmo,” he says proudly.

While one side of TikTok seemed to pick up on Elmo’s cheekiness when dictating the ingredients, arguing that Elmo was being “flirty,” there was a resounding sentiment from the rest of ElmoTok that Elmo’s pronunciation was obviously just his New York roots shining through.

ElmoTok quickly became divided on the matter, as users took to the sound to state their own case for Elmo’s pronunciation.

Dennis, who went viral for his own rendition of the sound, says that he’s “never seen such a split” in the way a sound has been interpreted. “I think it’s so obvious that he sounds like a New Yorker from the Bronx.”

Soon, Elmo began being tied to various New York trends. A perennially viral video from @hittinlikegrabba, in which the TikToker asks, “Are you from New York even? Do you have a big black puffer jacket even?” resurfaced with an Elmo-y twist. “Elmo got his black puffer on,” wrote TikToker @ryddy713.

Another TikToker even gave an impersonation of Elmo reciting the viral New Yorker video.

Though first shared in March of 2021, this sound seems to have taken off on TikTok in early January 2022 after the Elmo-Rocco feud resurfaced. In the clip, Zoe presents the possibility of using an inflatable tube to let Rocco the rock float in water. However, Elmo explains to Zoe that Rocco will fall through the middle of the tube and sink. When Zoe expresses her disappointment that Rocco will never float, Elmo responds, “Oh, well. Too bad. Bye, Rocco.”

Noting how brutal Elmo’s disregard is, many TikTokers began using the sound to act out skits inspired by the scene. In some TikToks, Zoe’s lines are used to convey someone trying to manipulate them into doing something, to which they reply with Elmo’s, “Too bad. Bye, Rocco!” In others, the plot is a bit more complicated — like this owner trying to convince her cat to stop sitting like a human.

“This Playdate Is Over!”

Another sound shared on TikTok in the spring of 2021 that gained a newfound popularity amidst the rise of ElmoTok, “This playdate is over!” is another classic case of Elmo bringing out maximum sass during a frustrating moment with Zoe.

Intent on making a dramatic exit from his playdate with Zoe, Elmo is stopped by Zoe’s protests — which frustrates him even more until he lets out a scream.

TikTokers have used the sound to act out skits in which an already upset person is pushed over the edge by the wrong question or comment.

If this brief but powerful history of ElmoTok has you wondering how to get your For You Page to Sesame Street, start scrolling through a few of these viral sounds. Your algorithm should take the hint. (Unless, of course, your FYP is Team Rocco.)