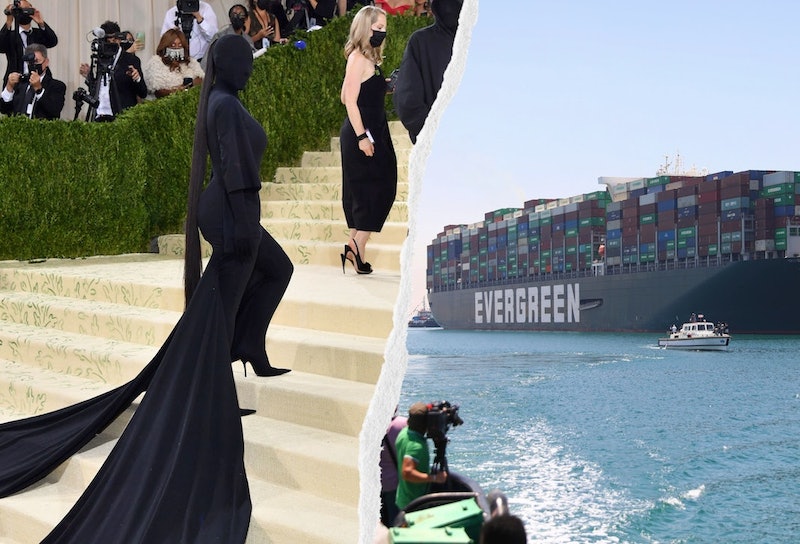 With many of us spending more time at home these days, the social media meme machine has been steadily grinding out some hilarious content. In just 2021 alone, there have been countless moments in which our timelines have been flooded by users trying their hand at the latest viral Tweet formats.

With a gold mine of memes, it’s only right to repurpose this year’s harvest of content into a Halloween costume. But, before you go recycling another 2020 meme, remember that a lot has happened in the past year. (See: The “March 2020 vs. March 2021” meme.) Which means, if you want to be with the times and reference a meme that’s fresh in people’s minds, you should opt for some of the latest online laughs.

There’s been loads of memes so far that make for perfect Halloween costumes. From the nonsensical trends like sea shanties to topical memes like the Suez Canal ship and Bernie Sanders at Joe Biden’s inauguration, you’re sure to find a costume idea that suits your humor. Whether you’re looking for a costume that says, “I’m hip with the times,” or one that says, “My weekly screen time report is concerning,” we’ve got you covered. Here are the best Halloween costumes inspired by 2021 memes.

Repurpose the jacket from 2020’s “I’m once again asking for” meme costume by transitioning into this 2021 Inauguration Bernie meme costume. Grab some knit mittens, a winter jacket, a Bernie wig, and a surgical mask (which will come in handy for safety, anyways!). If anyone pulls a Donald Trump, Jr., and tries to incorrectly explain socialism with Halloween candy, be prepared to use the opportunity to correct them in honor of Bernie.

Feel like your Rick and Morty costume has gone stale? Why not give it a 2021 twist by dressing as Timothée Chalamet and Larry David as captured in an iconic viral paparazzi picture? For Timothée, grab a white t-shirt, denim vest, beige cap, and — if you can find it — some flame-printed shorts. (Maybe ask Guy Fieri if you can browse his closet?) For Larry, wear a grey sweatshirt, wire glasses, and a balding wig.

3. The Ship That Blocked The Suez Canal Meme

Here’s a meme costume that’s not exactly evergreen, but it does say “EVERGREEN” on it. Who can forget our stubborn icon of the year, the cargo ship stuck in the Suez Canal? To make this DIY, wear a multi-colored checkered shirt to look like the boxes on top, and forest green pants. Tape paper letters that say, “EVERGREEN” on the side. At the party, make your catch phrase of the night, “I’m just gonna squeeze right past you,” before getting stuck between people or in high-traffic doorways. People might get annoyed, but, hey, it’s not like you’re disrupting global trade.

Here’s a two-person costume that’s open for interpretation. The only required element, really, is some kind of visual indicator like name tags that say “March 2020” and “March 2021.” You can base it off your favorite Twitter interpretation of the meme, put your own spin on it, or just dress in the same outfit but with one of you looking extremely disheveled and distraught. Hopefully your “March 2022” costume will be in better spirits.

This might only be appreciated by a Gen Z crowd. (Or, anyone who’s on TikTok, for the hip millennials.) TikTokers have put their creativity to the test this year by trying to make TikTok videos inspired by the Adult Swim bumpers, in which they sneak the “[AS]” logo into a video. To do the same, all you’ll really need is to tape an “[AS]” somewhere onto your outfit and wait for people to find it. If you’re looking for a grand reveal, you can request “Running Away” by VANO 3000 and unveil your logo at the beat drop.

Based on the amount of epic duet threads we’ve witnessed this year featuring loads of users singing sea shanties together, this can be a one-person, two-person, or group costume. Dress in your best sailor or fisherman garb and get to rehearsing “The Wellerman” by Nathan Evans.

7. The Weeknd At The Super Bowl Meme

The key to meme-ifying this costume will be taking your friends’ phones and snapping chaotic, close-up, in-motion selfies of yourself like the handheld camera work in The Weeknd’s Super Bowl performance. Grab a black shirt and tie and a red jacket and, if you’re able to recruit some backups, have some friends wear matching outfits with face bandages. You’re sure to turn any party into a frantic fun house.

When it comes to comedic supporting actress, Kathryn Hahn might be one of the greatest of all time. If you’re looking to add your own comic relief to this Halloween, dress as her WandaVision character Agnes Harkness and throw in some cheeky side-winks throughout the night to partygoers. All you’ll need is a black sweater over a collared shirt and a cameo brooch. Make sure you plan some photo ops to recreate the meme!

Whether you’re a Star Wars fan or just a Twitter user, you’ve probably seen the hilarious memes inspired by the “red flags” Anakin gave Padme in Attack of the Clones. Grab a friend and dress in your best Anakin and Padme costume, and, if you’re feeling really dedicated, find a lush green field for a reenaction photo shoot.

Your local Spirit Halloween probably won’t carry any Balenciaga bodysuits like Kim K’s from the 2021 Met Gala. But, as many memes have already proven, Kim’s Met Gala look isn’t far off from a Harry Potter dementor costume — which you’re sure to find online and in some costume stores. If anyone mistakes you for a soul-sucking dementor, tell them they must be thinking of the paparazzi.

There’s plenty of memes surrounding the hit South Korean drama Squid Game to choose from. And, if you’re looking to reference a specific viral moment in the series, consider making dalgona cookies and challenging your friends to cut out the shapes in them.

Inspired Squid Game Jumpsuit
Etsy
S-XXL
Squid Game Facility Guard Mask
Etsy
Cabemin Squid Game Jumpsuit Merch Tracksuits
Amazon
Size 2XS - 4X
More like this
21 Galentine’s Day Memes To Celebrate Your Best Friends
By Meghan Bassett and Mia Mercado
Dunkin’s Valentine’s Day Lineup Includes A Drink That Tastes Like Dessert
By Alexis Morillo
23 Super Sweet Things To Write In A Valentine's Day Card
By Karen Belz and Lexi Inks
12 Aphrodisiac Desserts To Spice Up Your Valentine’s Day
By Kaitlyn Wylde
Get Even More From Bustle — Sign Up For The Newsletter
From hair trends to relationship advice, our daily newsletter has everything you need to sound like a person who’s on TikTok, even if you aren’t.

This article was originally published on Sep. 27, 2018