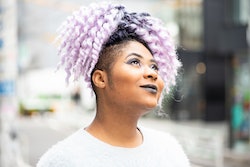 Do you ever feel like you're constantly meeting people of a certain zodiac sign? Chances are that you're naturally drawn toward certain astrological personality types, since the compatibility between zodiac signs varies. But there's a chance you could attribute this phenomenon to the fact that there are simply more people born under certain signs than others. The most common zodiac signs might surprise you.

According to data aggregated by FiveThirtyEight, which studied the number of births in the United States between 1994 to 2014, it appears that birthdays throughout all 365 days of the year are not equally distributed. In fact, the top most common birthdate (September 9) boasts nearly double the number of births than the least common birthdate (Dec. 25). Which means if you can name a slew of early-September Virgos off the top off your head but struggle to think of any Capricorn Christmas miracles, you're probably not alone.

Fun fact: The three most common zodiac signs share their sun sign seasons back-to-back — meaning that the largest number of birthdates are clustered within one three-month chunk of the year. That might be why you've noticed you're always buying more birthday cards, sending more birthday texts, and showing up to more birthday bar crawls throughout (spoiler alert) the summer season.

Without further ado, meet the three most common zodiac signs in astrology.

The summer months of late June through late September, which are ruled astrologically by the signs of Cancer, Leo, and Virgo, are the most common times of the years for birthdays. That means that we do indeed have more moody Cancers, attention-loving Leos, and critical Virgos running around than any other signs! While the data shows Leo as the most common sign, followed by Cancer and Virgo, the difference between them is pretty small. So given the near-tie plus the fact that the sun switches zodiac signs at a different time (and sometimes a different date) each year, it's impossible to know how many cusp zodiac sign babies were born within one sign's territory or the other. So until birth data starts factoring in the astrological position of the sun, we'll have to settle on a relative tie between our top three. Regardless, there are a lot of babies’ horoscopes that land in the summer.

Cancer is one of the zodiac's introspective water signs, so you may not have noticed that we have a whole bunch of these unassuming but powerful crabs scattered along our shores. Cancer season is the astrological period that kicks off the summertime — and it also ushers us into the most birthday-dense stretch of the year. Studies show that more babies are born during the summer season than any other time of year, so it makes sense that we'd see more people born within Cancer's emotional territory. While two Cancer season dates (July 4 and 5) do appear amongst the 20 least common dates of the year, those lows are more than made up for by the consistently high birth numbers throughout the rest of their astrological stretch.

Cancers and the most nurturing sign of the zodiac, so having so many of them among us ups our collective sense of comfort and emotional intelligence. This sign excels at making people feel safe and well-taken care of (and they're also traditionally known as the most maternal sign of the zodiac), so it feels good to have them around in excess. No one can complain about being coddled and pampered by a gentle, compassionate, and comforting Cancer.

You didn't think that flashy Leos would stand for anything but the best, did you? This regal zodiac sign may not have dominated the top 10 birthday list (they actually don't show up there once), but it still rules over more than one quarter of the top 100 most common birth dates — which helped secure its spot at the top. Many Leos were likely conceived during the chilly and festive winter holiday period, during which many of us are cuffing ourselves up for the winter season ahead and connecting with loved ones during Thanksgiving weekend.

We're blessed to have so many Leos among us, as this zodiac sign (which is ruled by the sparkling sun itself) is one of the most warm and gregarious of the astrological bunch. Leos love to party and gas up their friends — and while they have a reputation for being a bit egotistical, they're just as generous as they are attention-loving. Our world is a little brighter thanks to the abundance of sunny and optimistic Leos. Plus, Leo season is naturally a celebratory time, since it takes place at the height of summer.

A whopping nine out of the top 10 most common birth dates fall within Virgo season — and all nine of these Virgoan birthdates fall between the week-and-a-half-long period of Sept. 9 to Sept. 20. This means that many of these babies were conceived during the cold and cuffing-season-heavy month of December, when many of us are hunkered down at home with our partners celebrating the holidays. No wonder it's such a popular baby-making season!

We're lucky to have an abundance of Virgos among us, as this sign is one of the most detail-oriented, thoughtful, and hardworking signs of the bunch. Their service-oriented energy seeks to improve the world around them, so our world is probably kinder (and most definitely more organized) thanks to large influence of these giving earth signs.