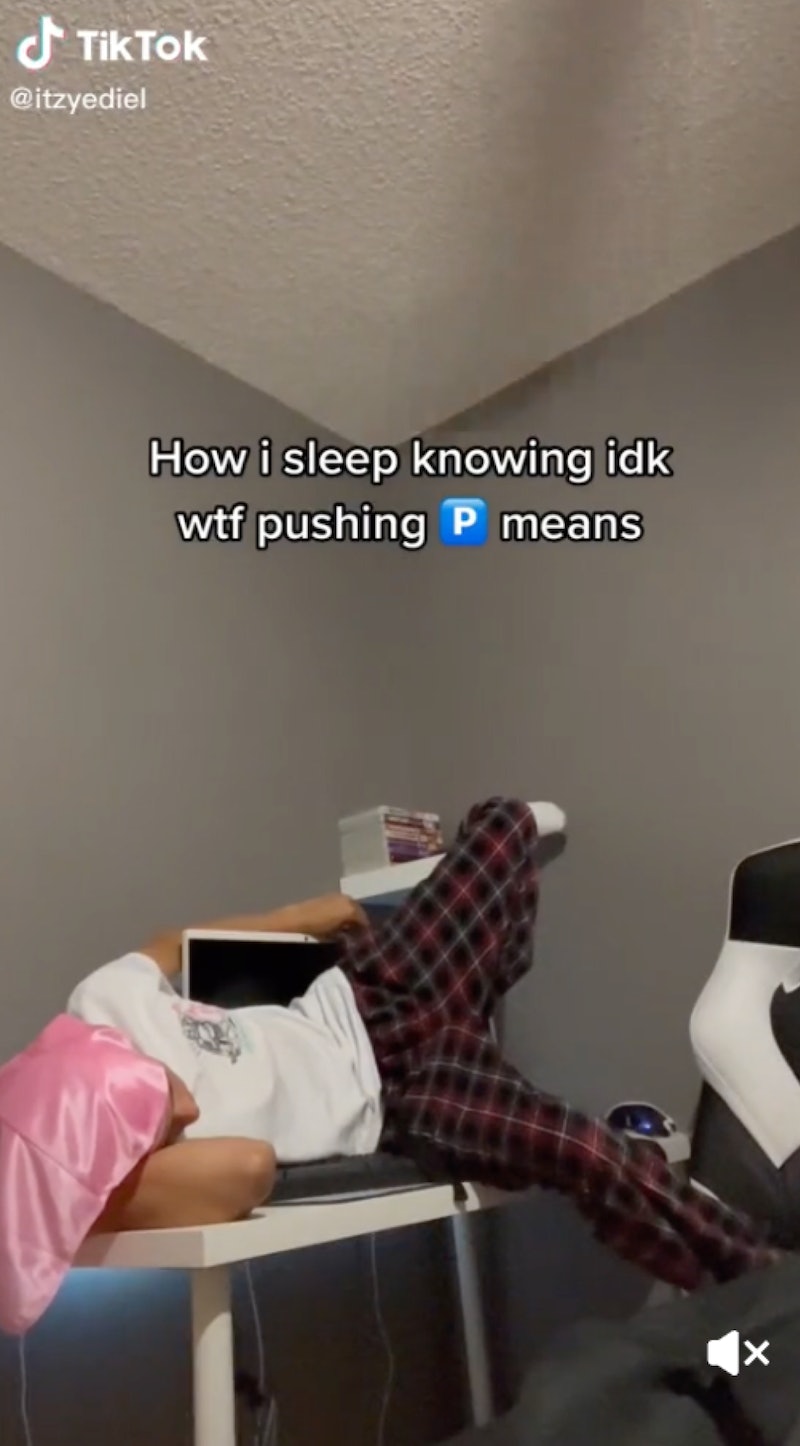 If you regularly visit TikTok comment sections, emojis like 👉👈, 👁️👄👁️,​​ and 🧢 are probably in your “frequently used” keyboard folder in case you need them for roasting, praising, or riffing. However, even those most adapted to TikTok terminology probably didn’t expect the parking sign emoji (🅿️) to enter their emoji lexicon.

“If your top emoji isn’t 🅿️,” reads one TikTok with over 66K likes, “you’re not pushing 🅿️.” Along with frequent comments like “🅿️is not Learned it’s understood,” it seems that “P”has gone the way of “IYKYK.” (That’s “if you know, you know,” if you don’t know.)

But you don’t need to push through your entire FYP to find the meaning of the P emoji. In fact, the very artist who popularized the term, Gunna, has offered several explanations to fans about what it means to be “pushing P.”

According to Blavity, “P” and “pushing P” have been used in regions like the Bay Area and Texas for decades to mean “keeping it real.” However, judging by the fact that almost all of the term’s Urban Dictionary entries are from 2022, it’s fair to say that “pushing P” didn’t take off on the internet until the debut of Gunna’s latest album, DS4Ever (Drip Season Forever).

Released on Jan. 7, 2022, “pushin P” is the second track on DS4Ever. Featuring Future and Young Thug, the track contains the phrase “pushin’ P” in almost every line. Yet, the context around the phrase remained pretty elusive. That is, until Gunna began using the phrase and discussing its meaning online. According to Complex, it wasn’t until Gunna began feuding with rapper Freddie Gibbs that the artist expanded upon what it means to be pushing P — and, presumably, the ways in which Gibbs was not P.

In a January 2022 interview with The Breakfast Club, Gunna explained that the “P” in “pushing P” stands for “player.” (Which, for many, didn’t really clear things up.) However, in various livestreams, Gunna clarified that P can also stand for “paper,” and listed a few examples in which P seems to essentially mean any kind of admirable behavior. (For instance, Gunna said in a recent Instagram livestream that holding the door for a woman is P, but arguing with your partner about money is not P.) Some have guessed that the pushing P can even be summed up as “pushing positivity.”

Due to the elusive nature of “pushing P,” and Gunna’s relatively vague explanations of the term, 🅿️ has become the perfect fodder for TikTok trends and memes.

However, more often than not, it seems that most of the 300k videos using the “pushin P” sound meme-ify the phrase for its mysterious meaning and TikTokers’ desperation to understand it. Many have joked about having no clue what 🅿️ means, and poked fun at how confusing Gunna fans sound while trying to explain the term.

As the trend has picked up, more literal spins on the phrase have emerged — including videos of pushing a whiteboard with the letter P drawn on it and one user pushing a bag of peas on a leash.

Others have noted the burden that falls on a select few: the Sisyphean task of being doomed to push P for eternity. And you can’t forget the video of Nicki Minaj pushing a toppled car, onto which which one user photoshopped a 🅿️.

Now you know the origins of P and how to spell it, but can you use it in a sentence? Much like its meaning, there’s a variety of ways in which P and “pushing P” can be used. The most common iteration is directly paraphrased from Gunna’s song, in which “pushing P” is used as a verb. However, “P” can also be used as an adjective with a similar meaning. (For instance, “That’s P,” or “That’s not P.”)

Complex also notes that Gunna offered another use of P in one of his livestreams: kicking P. The phrase seems to mean a failed attempt at pushing P, as Gunna offers the example of renting a home versus owning one. The latter? You guessed it. Is pushing P.

From its regional origins to its meme-ified popularity, you can now be on your Ps and Qs about all things pushing P.