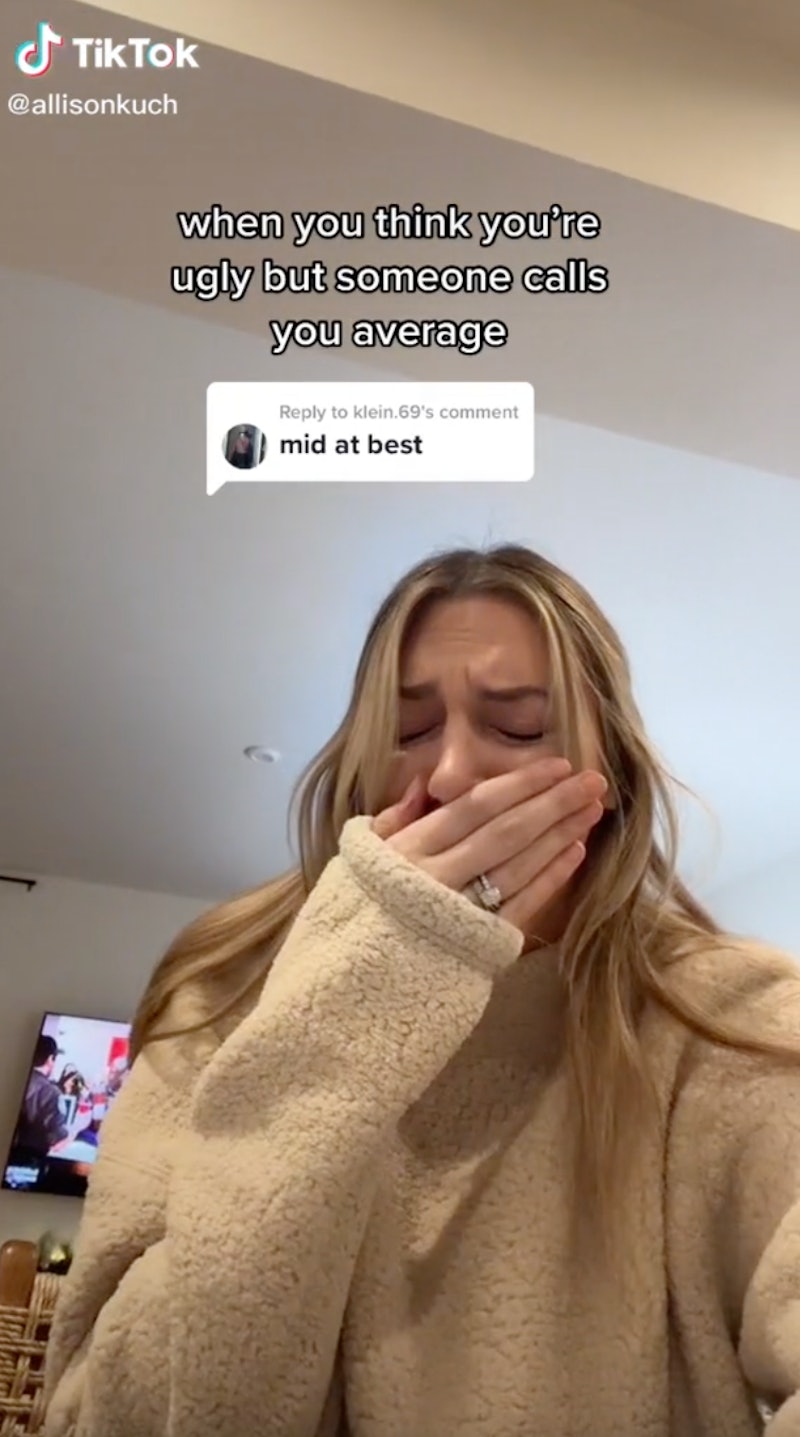 Just as scrolling on TikTok can educate us on a variety of topics — from recipes to the royal family — it can also leave us with a lot of questions. For example: Why is someone in my comments section telling me my TikTok editing skills are “mid”? Am I mid? And what does Skyline Chili have to do with all of this? If the phrase “mid” has you feeling vaguely insulted for reasons you can’t put your finger on, then you’re probably looking for what “mid” means on TikTok.

Though “mid,” the word, existed long before TikTok was a sparkle in Musical.ly’s eye, the app has made the word increasingly popular among internet users — not only showing up frequently as a diss in comments sections, but also being used in popular sounds and trends. According to the top definition on Urban Dictionary, posted in 2020, “mid” is “used to insult or degrade an opposing opinion, labeling it as average or poor quality.” (Way harsh, Tai!) While the word can be used in less severe ways, like calling an album or movie overrated, context is key — as using it to label one’s looks, or an entire region of the United States, is typically deemed a tad offensive.

Perhaps one of the most well-known TikTok trends using “mid” is a sound that began circulating in 2021 from a September All Elite Wrestling clip. In the clip, AEW fighter Maxwell Jacob Friedman disses a Cincinnati, Ohio, crowd, screaming, “It’s called the Midwest because every single thing in it is MID.” He goes on to list various Ohio trademarks, labeling them one-by-one as mid. “Skyline Chili? Mid! Your Cincinnati Reds who haven’t won a World Series since 1990? Muh-muh-muh-mid!” he screams. “And every single person who lives here ... is ... MID.”

It seems that the Midwest was able to recover fairly unscathed from the attack. However, TikTok discourse sustained lasting injuries.

The most popular iteration of the monologue on TikTok is a sped-up version with sound effects added for emphasis, which now has almost 200k videos using the sound. TikTokers have used the sound to complain about the “mid” characteristics of various topics, whether it’s doubling-down on Midwestern slander, or talking about how the college experience is mid.

Another popular sound using “mid” has taken off for TikTokers to flex their non-mid status. “What the hell could be the difference between you and me?” a high-pitched voice asks in the sound. “The difference is, I’m not mid,” another voice replies before a beat drop.

Some other contenders that have been pitted against one another using this sound are the left side of one’s face versus the right side, and Twinkies versus Gansitos.

Though more recent definitions of “mid” on Urban Dictionary define the word as a more general insult about something’s average quality, definitions from the 2000s and early 2010s more often reference “mid grade” cannabis. As Weedmaps explains, “Mid or mids is one of few terms for weed that's not quite top of the line but it's not awful either. It's average, the C-student of bud.” Because mid-grade weed is usually cheaper and lower quality than other strains, mid could be used as an insult in this context — especially to call someone cheap. However, the vast majority of definitions referring to mid-grade weed are neutral-positive, usually noting that mid-grade weed still gets the job done.

It’s unclear whether TikTok’s usage of “mid” is derived from this cannabis lingo, but the meaning of “mid” on TikTok is a bit more volatile. Perhaps this is due to the aggressive disses included in the popular AEW clip, or the app’s often black-and-white approach to discourse. (It’s almost like every month is “no nuance November” on the clock app.)

If you’re looking for a way to describe something as decent, mid might not be the most neutral term. But, if you’re trying to playfully roast your friend from the Midwest, it might be time to add “muh-muh-muh-MID” to your insult inventory.

Correction: A previous version of this article misstated Friedman's wrestling company. It has been updated to include the correct information.