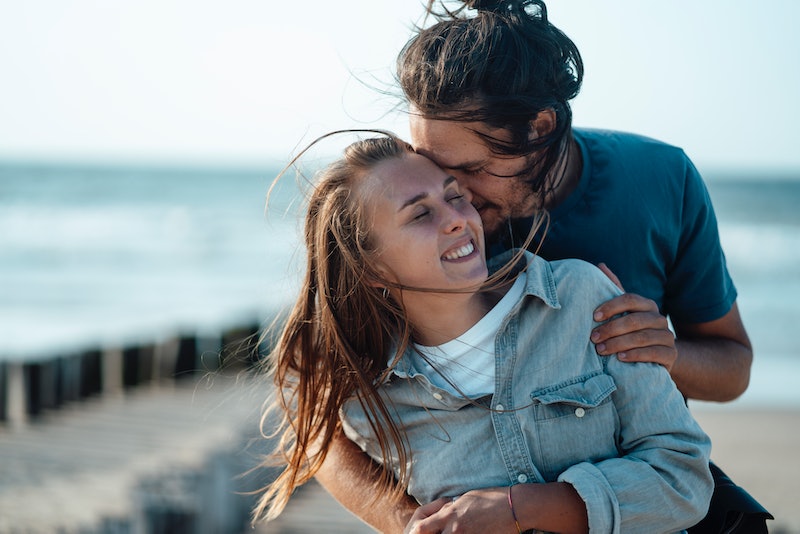 Sagittarius and Aquarius are two highly independent zodiac signs that tend to be perfectly content being single. The fiery archer is a restless spirit who hates feeling tied down, while the airy water bearer values their alone time. Yet, astrologers say these two have what it takes to make a relationship work. Sagittarius and Aquarius’ compatibility shows why this fire and air sign pair make a surprisingly good match.

“This is the original Britney (Sagittarius) and Justin (Aquarius) relationship, meaning it has Hollywood potential,” astrologer Clarisse Monahan tells Bustle. “Sagittarius and Aquarius are two signs that jive on first meetings. They have a sextile aspect between them, which means they are two signs away from each other. In astrology, this is associated with a Venus aspect, which promotes harmony, ease, and commonality.”

They’re both very independent signs and tend to favor autonomy in relationships. Sagittarius can go off on a weekend adventure at a moment’s notice, and Aquarius will happily send them off. Aquarius will be able to take as much alone time as they need without feeling guilty. According to Monahan, it’s a relationship that won’t require a ton of compromise from each other in this realm.

“This liberal couple is meant to be together, and when they look at each other they see themselves, yet in a new light,” Stina Garbis, professional astrologer and psychic, tells Bustle. “Fiery, mutable Sagittarius is emotionally free, accepting, and has a big heart, while airy, fixed, Aquarius, who is also a free spirit, marches to the beat of a different drum. They have very different ideas to what makes a relationship tick, and Sagittarius loves it.”

According to Garbis, this is one pairing that will dream big together. They’ll have a ton of deep conversations and will always know where each other stands. However, they may make a lot of future commitments without following through, which is an area where they may run into issues long-term.

Sexually, this is a good match. According to Monahan, the bedroom is a place where they can really connect. “They both tend to get off on deep intellectual conversations and other worldly topics,” she says. “Chemistry begins in the mind for this pair.” They can have fun and then spend the rest of the night exchanging stories or interesting facts they’ve learned.

With Sagittarius and Aquarius, things just click. “Sexually, there is no frustration here,” Garbis says. “This intuitive couple can sense what each other wants and needs and are both eager to satisfy.” Long term, they’ll know how to keep the flame burning. They’re both pretty adventurous in bed and will enjoy trying new things together. Aquarius will always have a new toy or sex position to bring to the table, and Sagittarius will happily try them out at least once. “They’re constantly finding new ways to satisfy each other,” Garbis says.

Emotionally, these two seem to be in sync. Both Sagittarius and Aquarius tend to respond to situations logically, and will rarely ever have an emotional outburst. Sagittarius is a very honest and upfront sign. If something upsets them, they’ll make it known at the moment and then move on. Aquarius is a little more guarded with their feelings, and will only share them out loud if they feel the situation calls for it.

Falling in love will be interesting as both signs aren’t exactly relationship-oriented. Instead, they tend to enjoy meeting new people and nurturing their friendships. There’s a good chance these two will start off as friends who eventually become something more. Sagittarius will likely be the first to make a move, and Aquarius may take some time to weigh out the pros and cons before agreeing to take their relationship to the next level. These two will be both romantic partners and best friends.

Despite their reputations for being on the quirky side, Sagittarius is very philosophical, while Aquarius is very intellectual. These are two signs that “share a sense of wonder” about the world and will enjoy sharing their thoughts and opinions with each other. “They are bosom buddies, like two peas in a pod,” Garbis says.

So, when it comes to dating, it’s no surprise that Sagittarius and Aquarius’ compatibility is pretty high. According to Garbis, “it’s instant synergy” when they first meet, and there’s a “sparkle” that radiates between them.

“They are drawn to each other immediately, and though it may seem they start off as friends it’s really more than that,” Garbis says. “Both Aquarius and Sagittarius date their friends, and this may be a bond where they can be casual and have lots of fun but not be fussy over this and that. They just jump to having a good time.”

Sagittarius and Aquarius make excellent friends. In fact, Garbis says they can be the best of friends. They just might have to deal with some “uncomfortable sexual energy” between them. According to her, both signs live life their own way and never sweat the small stuff.

“This would be a friendship full of laughter and good times, minus the drama of the mundane,” Garbis says. “These two have the capacity to get into trouble and would be the type of friends that party together and go to jail together handcuffed hand and hand.” Sagittarius and Aquarius are true partners in crime.

Sagittarius and Aquarius tend to get along very well because they both have a great sense of humor. Their conversations are a lot of fun, especially since they don’t take themselves too seriously. While this can definitely keep their relationship going, they may avoid tackling more serious topics like moving in together or taking the next big step in their relationship.

“Neither of these signs likes to delve into serious relationship talks and would rather keep things light or philosophical,” Garbis says. “They can have very deep conversations of a spiritual or higher nature, talk about travels to foreign lands, or imagine a brighter future for all of humanity. But when it comes down to talking about their future together, they both may play a little dumb and quickly change the subject.”

When it comes to conflict, neither sign likes to fight. Instead, they’re more likely to laugh off an issue or avoid talking about it altogether. This can cause some tension in the relationship, especially if one partner accuses the other of not being “serious” enough about the relationship. On the plus side, Sagittarius and Aquarius aren’t the type to hold grudges. Chances are, they’ll let their frustrations out and then go out for ice cream feeling good about things again.

Sagittarius is Jupiter-ruled, meaning they’re always expanding, moving, and growing. While Aquarius is associated with Uranus, the planet of innovation, and its ancient ruler is stuck-in-the-mud Saturn, who’s all about responsibility, limitations, and restrictions. “Saturn and Jupiter are opposites,” Monahan says. “Jupiter is all about the easy path, and Saturn is about putting in the hard yards. Both have different approaches to life and this can result in butting heads sometimes.”

Additionally, both signs can get so caught up in their own projects and passions that they forget to invest time and energy into nurturing the relationship. According to Garbis, “Things can fizzle and dissipate slowly, and they may separate without truly closing the door or having the serious breakup talk.”

Are Sagittarius & Aquarius A Good Match?

Despite the issues they may face, Sagittarius and Aquarius are considered to be a compatible zodiac match that has what it takes to last long-term. “Aquarius can help provide stability for the free-wheeling Sagittarius, while the archer helps Aquarius move more easily into the future,” Monahan says. As long as they’re making time for each other, there’s no reason why this can’t last.

More like this
The 3 Zodiac Signs Most Likely To Get Married Later In Life
By Kristine Fellizar
4 Zodiac Signs That Will Take Forever To Admit They Like You
By Kristine Fellizar
TikTok's "Triangle Method" Technique Is The Key To Better Flirting
By Carolyn Steber
My Partner Wants Me To Wear A Diaper During Sex. Help!
By Sophia Benoit
Get Even More From Bustle — Sign Up For The Newsletter
From hair trends to relationship advice, our daily newsletter has everything you need to sound like a person who’s on TikTok, even if you aren’t.

This article was originally published on Dec. 20, 2021