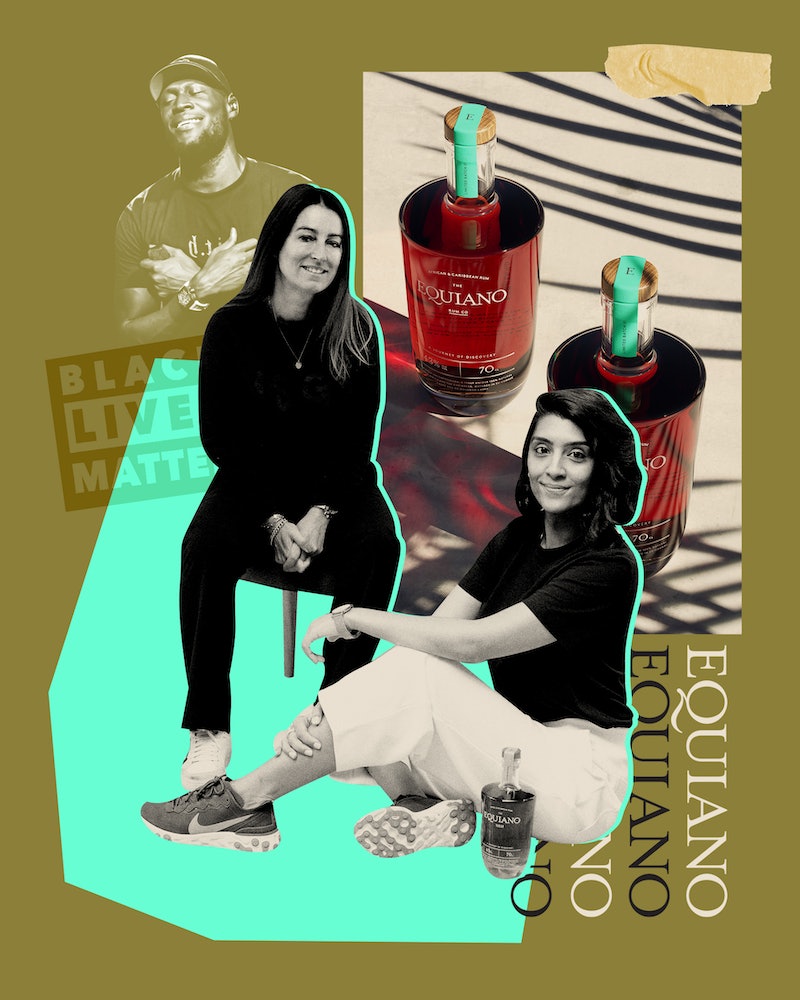 Did you know that Stormzy is quite the rum aficionado? Back in 2019, he was enlisted by the Observer Magazine as a guest editor, and his drinks column featured a few of his favourite bottles – the top choice being Equiano, the world's first African & Caribbean rum. The UK-based brand was co-founded in 2018 by Oli Bartlam, Aaisha Dadral, Ian Burrell, and Amanda Kakembo, who were inspired to create their own rum for the love of the spirit, but also to honour and highlight its history.

Rum is a spirit whose roots lie in the transatlantic slave trade. It's a fact that's often overlooked by the major rum brands, aside from maritime sketches on the bottle labels, but thanks to Stormzy's rum brand of choice, its historical significance is now being brought to our attention.

Firstly, the four co-founders decided to name their rum after Olaudah Equiano, an 18th-century human rights activist, abolitionist, writer and entrepreneur from what's now southern Nigeria. And secondly, they've partnered with Anti-Slavery International, an organisation working to eliminate all forms of modern slavery.

Equiano has already won awards despite being a young brand, proving it’s never too late to start something new and shake up an industry. Here, Bustle catches up with Dadral and Kakembo to find out more about their brand's namesake, their work with the anti-slavery charity, and of course their favourite rum cocktails.

What inspired you to set up Equiano?

Amanda Kakembo: I used to run a celebrity endorsement company, but I'd always wanted to have my own brand. I’ve always loved rum, and I just thought, you know what? I'd like to do my own rum. I asked a friend who I've worked with in the past if he'd like to join me. He said yes, definitely. Then both of us persuaded Aaisha to come on board.

Aaisha Dadral: Amanda had this great idea to make a dark spirit, and decided it was going to be rum because she likes having good time, to be honest! We got together and did some workshops. The concept evolved, and we came to the idea of blending an African rum with a Caribbean rum – it was a lightbulb moment.

Why do you think African and Caribbean rums haven't been blended before?

AK: I think Mauritius has the best rums coming out of Africa currently, and the export industry is relatively young there.

AD: Mauritius has been making rum-making up for a long time. They only started making rum commercially in the last, I think, five to seven years, as the government decided to invest in rum as an export. While sugarcane in the Caribbean first came from Africa, ironically, Africa hasn't built that industry yet or exported it in the way that the Caribbean has.

Why did you name your rum after Olaudah Equiano?

AK: A friend of mine mentioned Equiano, and we all were like, 'Oh, my God, that's a brilliant idea’.

AD: Equiano was a freedom fighter, writer, abolitionist – ultimately a voyager. He was born in the 1700s in today's Nigeria, enslaved at 11 years old, and taken to the Caribbean. Unlike the vast majority of people then, he managed to learn how to read, write and count. In doing so, he convinced people to allow him to trade, and one of the things that he traded was rum.

He made and sold rum, managed to save his money, and eventually bought his liberation for a massive sum of money, equivalent to £5,000 today. Once he became a free man, Equiano moved to the UK and settled here. He was encouraged by lots of people to write his experiences down, so he wrote his autobiography.

It's shocking and a travesty that none of us knew his name before now. Shame on all of us, but really shame on the systems that don't teach us about it. Th narrative around the abolition of slavery rarely features the African names who did the ground-level work to get the movement going.

How does rum play into the wider narrative on Black history?

AD: This year, many rum brands have had to redress their narrative to acknowledge the history of rum, its distilleries and plantations. You can't change history. The most important thing now is to move forward in a way that we all think is more appropriate for today, reflecting the world that we want to see.

Why is the partnership with Anti-Slavery International important to you?

AD: The Equiano Foundation is something that we agreed on as founders before we even had a name for our business – that's not just a nice line, its the truth! We decided that we wanted the business to have a philanthropic arm; the intention is that every year we'll change the organisation, but keep the focus on the parts of the world that are related to the provenance of our rum. So, for 2021, it's our partnership with Anti-Slavery International. We're trying to close the loop, and make good on some of those conversations that will inevitably come up.

How do you stand out in an already established market?

AK: I think rum is a category that hasn't been modernised yet. So it was really important for us to have a very modern-looking brand, and something that made us stand out – i.e. being the first African and Caribbean blend.

AD: While Amanda and Ollie have had some experience in the spirits industry, we don't really come from that background. I think what that brings is a great degree of naivety and ignorance, quite frankly, and the outcome is the audacity to do something totally different.

And of course, what’s your favourite way to drink Equiano rum?

AD: Previously, I probably would have said a Gold and Stormy, but now I'm quite an Old Fashioned drinker.

More like this
It’s About Time Black Girls’s Voices Were Heard – & 'Girlhood Unfiltered' Is The Start
By Paula Akpan
Footballer Jake Daniels Shared His Thoughts On A World Cup Boycott
By Sam Ramsden
Iran Has Issued A Death Sentence Over Mahsa Amini Protests
By Catharina Cheung, Darshita Goyal and Maxine Harrison
Twitter Is In Awe Of Alex Scott & Her Show Of Solidarity At The 2022 World Cup
By Sophie McEvoy
Get The Very Best Of Bustle/UK