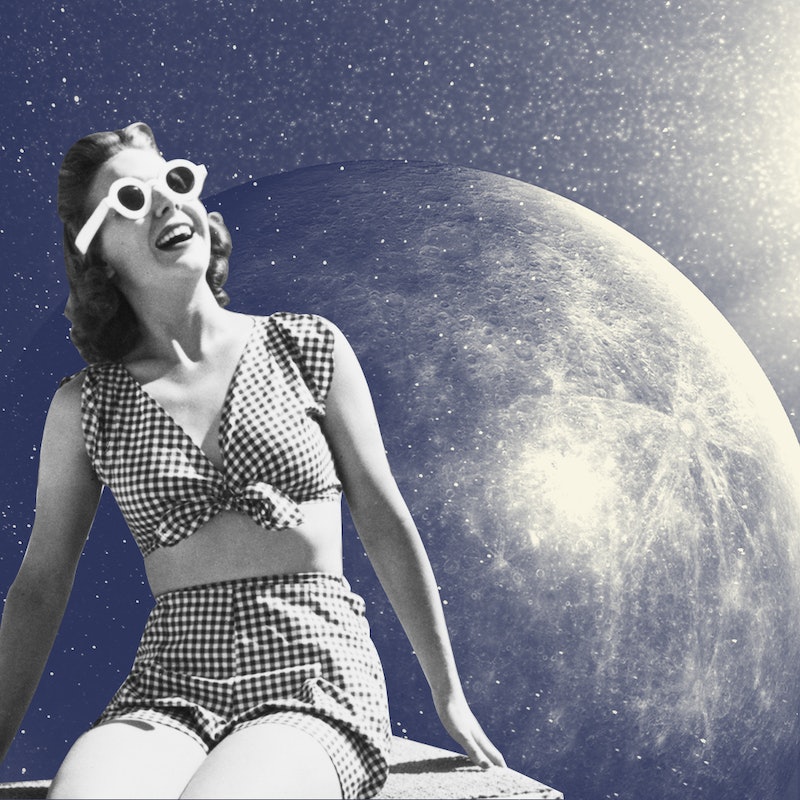 The astrology of 2020 and 2021 were packed with rare and tumultuous planetary connections — like the Great Conjunction and the Saturn/Uranus squares — and the unprecedented global events that took place mirrored the cosmic intensity in real time. While every year comes with its fair share of challenges, the astrology of 2022 has a much more hopeful, optimistic, and growth-oriented slant that all zodiac signs should get excited about. There are some once-in-a-lifetime planetary connections taking place, so the astrological events of 2022 are definitely worth putting on your radar.

The new year brings a lot of the usual cosmic drama: We’ve got a brand new set of eclipses, some major planetary shifts, and lots of retrogrades. In fact, every single major planet will be backspinning at some point this year — including Venus and Mars, which retrograde less frequently than the other planets. On top of it, there will be a whopping four Mercury retrograde periods this year rather than the usual three, so we’ll have to be extra conscious about avoiding the mental mix-ups that these cycles are known for.

There’s some not-so-typical astrological magic happening, too. The United States is experiencing its first-ever Pluto return, which is associated with new beginnings and challenging the dynamics of power and authority. On a lighter note, mighty Jupiter is having a very big year — which is a good thing for us, considering Jupiter is the planet of good luck. This fortune-filled planet is serving up spiritual awakenings and creative inspiration as it tours through its traditional home sign of Pisces, and it’s also making some rare and exciting connection with other planets, too.

That’s only the tip of the iceberg when it comes to the planetary activity going down over the coming year, so read on to find out about all the major astrological events happening in 2022 and how they’ll affect us.

Beginning The Year With Venus Retrograde

As we ring the 2022 New Years’ bells, love and money planet Venus will be in the midst of a 40-day retrograde period, which occurs approximately every year and a half. This Venus retrograde begins on Dec. 19 and wraps on Jan. 29 in the pragmatic earth sign Capricorn — meaning that we’ll spend the first month of the year reevaluating our relationships, values, and finances. This backspin could bring up past love life drama and force us to rethink our values, but it’ll also help us to get clearer on what we want to commit to in the longterm. It could feel like a harsh reality check, but the Venus retrograde glow-up that’ll come after we work through it is worth the wait.

On Feb. 22, the United States will undergo a once-in-our-lifetime and first-of-its-kind event known as a Pluto return. This means that for the first time ever, Pluto will return to the exact position in the zodiac that it was during the United States’ inception on Jul. 4, 1776. It takes about 225 years for Pluto to complete a full rotation through the zodiac, so the Pluto return is an alignment that no human has ever experienced in their own natal chart.

Named after the god of the underworld, Pluto is the planet of transformation and extremes. During the U.S.’s Pluto return, the country will have to reckon with these intense themes. The dark and power-hungry underbelly of authority and societal structures will likely be forced into the light, and it’s possible that something entirely new will be reborn. There’s no way to know exactly what that’ll look like, but as the social movements of recent years have shown, something has to change.

While we typically have just three Mercury retrogrades per year, in 2022, we’re maxing out with a whopping four of them. While 2021’s Mercury retrogrades took place exclusively within the mental air signs, this year’s will begin to transition into the practical earth signs. This means that in addition to dealing with confusion in matters of communication and thinking, the Mercury retrogrades of 2022 could make it extra difficult to plan ahead, stay on top of our schedules, and manage our money.

That said, this series of Mercurial backspins also give us an opportunity to press reset on the way we think through and handle tangible matters — like finances, investments, and our careers — and they can ultimately help us to get our lives more organized and our minds thinking more practically. The retrogrades start on Jan. 14, May 10, Sep. 9, and Dec. 29. If you take the usual Mercury retrograde precautions, you'll be just fine.

The astrology of 2022 is bringing all sorts of new beginnings when it comes to matters of love, sex, and romance — so if you’re looking to recharge your sensual batteries after January’s Venus retrograde, you’ll have plenty of opportunities. On Feb. 16 and Mar. 5, love planet Venus and sex planet Mars will be coming together in the zodiac and forming a powerful conjunction, which sets all zodiac signs off on a new cycle when it comes to pursuing what we want in relationships. This steamy planetary connection usually only occurs every other year or so, but this year it’s happening twice — which doubles our chance to align our romantic values with our passionate desires

We’ll also experience a special alignment between romantic Venus and the sparkly sun on Jan. 8 and Oct. 22 known as a “Venus Star Point.” These alignments helps to put us in touch with our values and be more authentic when it comes to love, so it can be a lucky time to beautify your life and put more of your true self into relationships.

We’re kicking off the year with lucky planet Jupiter having just entered ethereal water sign Pisces, where it’ll be through May 10 (and again from Oct. 28 to Dec. 20). This expansive planet brings blessings and benefits wherever it goes in the zodiac, but because Pisces is one of the signs traditionally ruled by Jupiter, it’s able to work its cosmic magic here even more effectively. This auspicious period will be marked by rapid spiritual growth, dreamy artistic inspiration, and an overall sense of wonder and idealism for all zodiac signs. It’s a great time for mystical and creative pursuits of all kinds.

This transit is made even more powerful by the fact that Jupiter will be joining elusive planet Neptune — Pisces’ modern planetary ruler — in their collective home sign for the first time in 150 years. These two spiritual planets will perfectly align on April 12 and enhance the fantasy-like energy of this period. This mashup won’t happen again in our lifetime, so enjoy the mystical vibes of this Piscean planetary connection. Additionally, look out for sudden spiritual awakenings and flashes of creative inspiration around Feb. 17, when Jupiter forms a harmonious sextile aspect with unpredictable planet Uranus for the first time in a decade.

From May 10 through Oct. 28, Jupiter will dip into bold fire sign Aries, which is part of a transit that occurs only once every 12 years. Because Aries is considered the first sign of the zodiac, this ingress signifies Jupiter’s completion of a full zodiac cycle and brings forth the energy of a bright new beginnings. This is a very auspicious time to start new projects, focus on fresh starts, or throw yourself into learning something new.

Eclipses in astrology happen between four and six times per year, and these rocky cosmic events are known for bringing about sudden endings, swift new beginnings, and shocking twists in our lives. The eclipses of 2022 are taking place on the Taurus/Scorpio axis of the zodiac, meaning we’ll be generally dealing with changes and revelations when it comes to our values, possessions, and energetic bonds We might find that we’re letting go of our need for power in a certain area of our life, but finding comfort and security in a new and unexpected one. Look out for flashes of insight on these themes around Jul. 26, when the North Node of Destiny aligns with rebellious planet Uranus, which only occurs about once every 15 years.

Ending The Year With Mars Retrograde

This year’s Halloween is set to be extra spooky, as Mars retrograde begins on Oct. 30 in the quick-thinking and inquisitive sign of Gemini, where it’ll backspin through the rest of the year, until Jan. 12, 2023. Mars is the planet of action, so it rules over the way we express our passion, anger, and ambitiousness. During its once-every-two-year retrograde periods, we often struggle to summon up the energy we need to get passionate about things or take any definitive actions toward our desires. It’s generally a low-motivation, high-exhaustion period, so cut yourself some slack if you find it hard to focus or be productive during the busy holiday months.