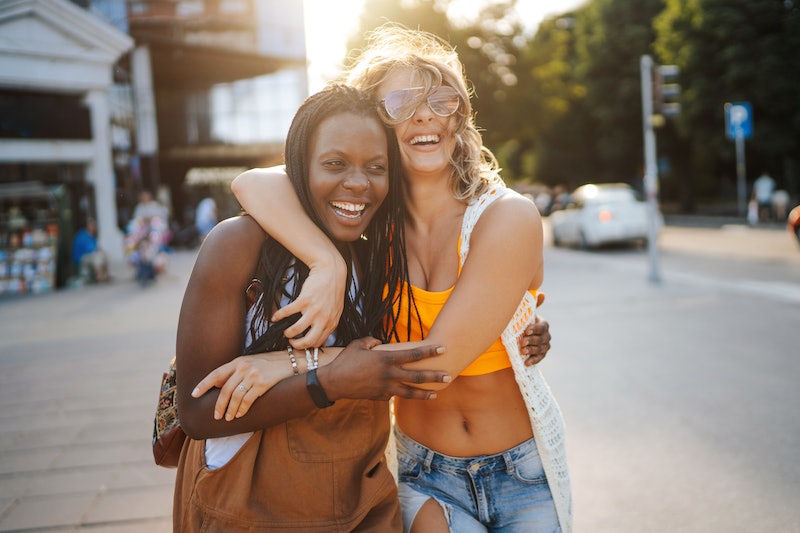 You’re probably familiar with the concept of people having soulmates, but have you ever heard of a twin flame relationship? Friendships and romances with people come and go, but some end up having a more profound and powerful effect on our lives. If you’ve ever met someone who you could understand on a spiritual level almost immediately, it’s possible that you’ve met your twin flame. But the meaning of twin flames in spirituality goes far beyond the potential for a passionate love affair — these fateful connections are believed to be able to bring more light, love, and high vibrations into the world as a whole.

So exactly what is a twin flame? Think of them as a single soul residing in two different bodies. The twin concept is helpful in understanding its meaning: Just as identical biological twins are two individuals born from a single split egg, twin flames are like two individuals sharing a single split soul. “A twin flame is your spiritual twin or other half,” psychic medium Nicole Bowman of Keen.com tells Bustle. “The purpose of the connection is to experience unconditional love and evolve spiritually through the bond that twin flames share.”

The love between twin flames is believed to be unlike any other partnership, as it’s the union of two twin spirits with the ultimate potential to make a difference in the world. Read on to find out more about this unique and influential spiritual bond and figure out how to find your twin flame, if you haven’t already.

What Defines A Twin Flame Relationship?

When we think of having a soul-level connection with someone, the first thing that might come to mind is the idea of soulmates — but this concept actually differs from that of twin flames. “A soulmate is anyone who stretches your soul, challenges you, and provides spiritual lessons for your growth and healing,” Bowman says. “Soulmates can come in the form of family members, romantic partners, friends, co-workers, or even pets, and their purpose is to grow your soul.” So while twin flame relationships certainly offer us opportunities for spiritual growth and challenges to overcome, their purpose is much deeper than that.

While twin flames are often talked about as lovers, they (like soulmates) can be non-romantic, too. That’s because the spiritual meaning of twin flame relationships is about more than than the trials and tribulations of love between two individuals — it’s ultimately to help make a positive difference in the world. “This connection is less about the twin flames [themselves] and more about the healing they will create together,” Bowman says. “Their unconditional love is meant to be shared with the world as an example of what we can achieve when we open our hearts and work together.”

Ultimately, it’s believed that twin flames have a purpose that’s much greater than themselves — and according to Bowman, these relationships actually have the power to “uplift the planet.” That’s why it’s necessary to use the synergy of two souls. “Because [this work] is so massive, a team effort is required,” Bowman says. “It truly is about a life of service shared with your other half.” When twin flames finally find each other, it’s more than just sparks flying. They usually join forces and use their love to achieve lifelong journeys in humanitarianism, spiritual growth, and soul healing for the collective.

How Do I Know If Someone’s My Twin Flame?

While people can have many different soulmates, many spiritualists believe that a person can only have one twin flame (which makes sense, since twins only come in sets of two) — or none at all. This is simply because some people are on a singular soul journey, in which the power of twin flames isn’t needed. These people will still have meaningful soulmate connections that assist them in their spiritual growth.

However, even if you do have a twin flame, it’s a wide world out there — so it’s possible that you won’t encounter each other in this lifetime, or that if you do, the timing won’t be right for you to complete your shared soul purpose together. That said, if you believe in the concept of past lives, then you can think of your twin flame as your partner in crime in a multi-lifetime journey of soul growth.

If you do meet your twin flame (or perhaps already have), expect for things to feel intense immediately. “You may feel a sense of familiarity, like you’ve met them before,” Bowman says. That’s because you’re essentially recognizing your own soul in another person’s body. While the connection could be romantic, platonic, professional, or even familial, it’s bound to be a powerful one that feels both spiritually and emotionally significant.

While intensity is practically guaranteed, finding your twin flame might not exactly feel like stepping into a technicolor world of love and rainbows. According to Bowman, twin flames can act as a sort of “mirror” to who we are. So while seeing our own soul reflected back at us by another person can bring a sense of comfort and connection, they will also bare all our familiar flaws, insecurities, and shadows — which can be a difficult thing to face if we’re not ready to dive into some serious personal shadow work. This intense soul-level recognition can feel overwhelming, which can cause some people to run in the other direction. That’s part of why it sometimes takes many lifetimes for twin flames to successfully make their relationship work.

Finding your twin flame is just one part of the journey — the rest is about the magic that you create together afterward. “What happens after meeting your twin flame is the most telling part of the process,” Bowman says. The initial chemistry is important, but what really counts is the fated feeling that you met for a reason, and that you somehow share a mission in life to make a spiritual impact on the world.

The influence and strength of a twin flame relationship is thought to be one of the most powerful spiritual bonds — not just for the individuals involved but for the collective. “True twin flame connections inspire people to love more deeply, elevate spiritually, and become more honest in their interactions,” Bowman says. “Through their love, the planet heals and people’s spirits grow.”

More like this
Emily Ratajkowski & Pete Davidson's Astrological Compatibility, Revealed
By Nina Kahn
7 Dos & Don'ts To Follow For The December 2022 Full Moon
By Brittany Beringer
These Are The 3 Most Mellow Zodiac Signs
By Kristine Fellizar
Here’s Your Daily Horoscope For December 2, 2022
By Mecca Woods
Get Even More From Bustle — Sign Up For The Newsletter

This article was originally published on Jan. 24, 2017