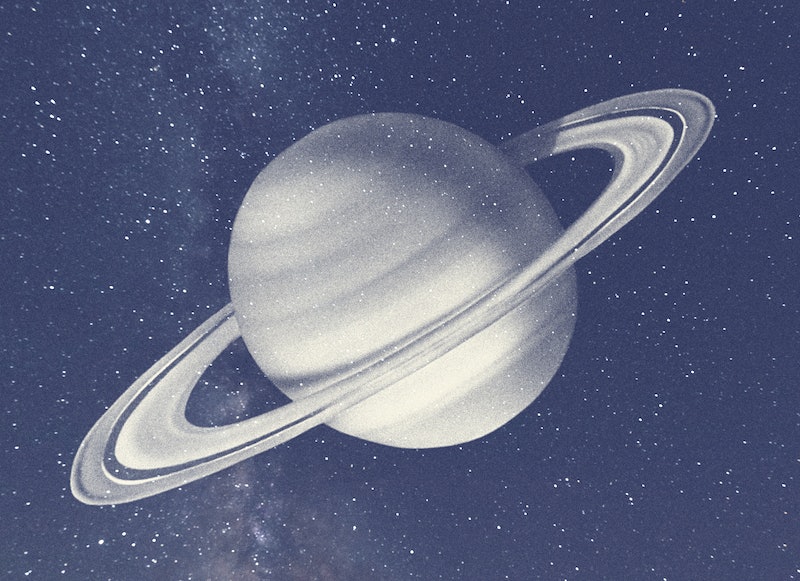 In astrology, knowing your sun, moon, and rising sign combination is a must, but understanding which planets actually govern each of these signs can totally unlock your birth chart. Every sign has its own planetary “ruler,” and that planet’s symbolism influences and aligns with the sign’s zodiacal qualities. Earthy Capricorns are ruled by one of most serious planets of the bunch, so it’s no wonder they have such a tough work ethic and sense of discipline.

If you hadn’t already guessed, Capricorn’s ruling planet is Saturn — astrology’s stern authority figure. Some zodiac signs are associated with two planetary rulers (one modern and one traditional), but Capricorn is solely ruled by Saturn in both ancient and modern-day practices. Saturn in astrology is all about growing up, working hard, and getting serious about life. And like its cosmic overlord, Capricorn zodiac energy has a lot of overlap with these themes, too. Classic Capricorn qualities include being goal-oriented, responsible, and focused on building a solid foundation.

Even if you don’t have any Capricorn placements in your big three, you still have all 12 signs somewhere in your birth chart — which means that getting to know Capricorn’s ruling planet is relevant to your personal cosmic exploration. Read on to learn more about Saturn and how it influences Capricorn’s overall vibe.

What It Means That Capricorn Is Ruled By Saturn

Saturn is the planet of rules and responsibilities in astrology, among other things, and it has an authoritative air of seriousness about its cosmic duties. It also governs things like time, patience, and maturity, so Saturnian energy values hard work over shortcuts and experience over luck. Named after the god of agriculture in Roman mythology, Saturn’s planetary meaning is all about being diligent, responsible, and reaping what you sow.

In the traditional practice of astrology, Saturn was referred to as the “greater malefic” planet — a nickname that alludes to the challenges and difficulties it can bring about as it travels in the zodiac. But Saturn is by no means a malevolent force in astrology. It’s simply dedicated to teaching us important life lessons and forcing us to grow into the most mature versions of ourselves we can be. You can see Saturn’s unique brand of tough-love at work in real time during your Saturn return period, which happens to everyone at around age 29 and is one astrology’s most infamous personal transits.

Saturn is one of the two “social planets” in astrology, given that it’s located between the inner “personality” planets and the outer “transpersonal” planets. This means that in both our birth charts and day-to-day astrology, Saturn can relate to our personal responsibilities as well as more collective struggles within society.

Looking through the list of notable Capricorn zodiac traits, it’s easy to see the influence that Saturn wields over this sign. Capricorns are earth signs who are known for being no-nonsense, down-to-business realists. They’re pragmatic, sensible, and not afraid to take responsibility or work hard to get what they want — and this makes sense, given that Saturn is all about getting real and learning from our experience. Saturn is also the planet that rules structure, so this makes Caps especially gifted when it comes to building a solid foundation for their goals. Thanks to the influence of Saturn, Capricorns have endless stamina, strong discipline, and loads of diligence.

When planets move through one of the zodiac signs that they rule, they’re able to express their cosmic qualities more effectively — which can make life easier for people of all signs. Saturn transits through its home sign of Capricorn approximately every 30 years, and the next time it’ll be there is from January 2047 through January 2050. For those of us who have Saturn in Capricorn in our birth charts, this will mark a Saturn return period.