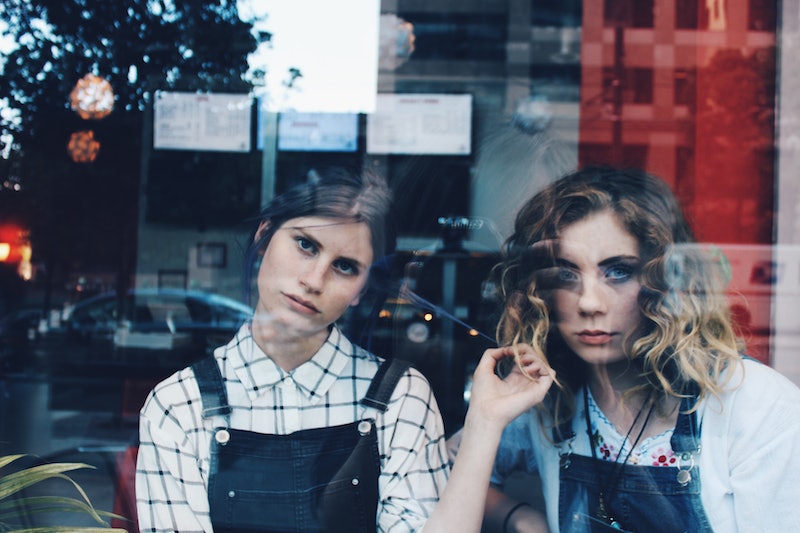 Disagreeing with your partner is never fun. You might argue, say some mean things, and give each other the cold shoulder for awhile. But usually, everything ends up being OK. Some arguments, on the other hand, are definitely worse than others. And a few can even lead to the end of your relationship.

These are generally the blowout fights that feel unfixable, or the ones that revolve around topics that are impossible to resolve. You might find yourselves having the same tedious discussion over and over again, or saying things that can't be unsaid.

While there are some exceptions, not every awful argument has to end in a break up. As relationship strategist Pam Evans says, "The only argument that should end a relationship is the one where one or both parties agree that they are no longer interested in resolving the issue or issues. If there is no determination to try to improve the situation, then there probably shouldn't be a relationship." If there is a desire to compromise, however, it may be possible to worth things through.

1. Arguments That Result In Name-Calling

If your SO drops a truly heinous name, it's often tough to get over. Name-calling not only hurts (and sticks in your mind for forever), it also has a way of catapulting an argument into high gear. This is true for insults as well, author and relationship expert Dr. Susan Heitler tells me. They have a tendency to cut deep in a way that can be difficult to overcome.

2. Discussions About Cheating — Especially If Your Partner Refuses To Stop

If you're in a monogamous relationship, it can hurt like hell when/if your partner cheats. Lots of couples call it quits afterward due to the loss of trust. But it is possible to work things out, if you both agree to be on the same page. If your SO refuses to change their ways, however, Evans tells me it might be a sign it's time to call it quits.

3. Disagreements About Finances And How To Handle Money

As far as relationships go, one of the things you both have to agree on is how and when to spend money. Bills have to be paid (annoying, I know) and so does rent. So if you two disagree on how to handle money — or one of you is consistently bad at it — it can make things complicated in a way that can be resolved.

As far as irreparable low blows go, it doesn't get much worse than admitting hatred for your partner's family. (And vice versa.) "If you truly hate your [partner's] parents, how [are they] expected to ever make that work?" asks Dr. Mike Dow, psychotherapist and author of Healing the Broken Brain. It can create a rift that's impossible to repair.

Drug addictions, and problems with alcohol, can truly tear a relationship apart. As Heitler says, this topic doesn't have to result in a big blow out argument, "... they just have to end in continued disagreement." If you can't handle your partner's addiction, or they refuse to get help, it will most definitely lead to a break up.

6. Convos That Include Low Blows And Mean Attacks

Again, horrible insults are hard to forget. "When partners take blows that are too low, it can be difficult to recover from them," Dow says. Think along the lines of attacking each other's intelligence, career choice, or morals. Yea, not cool.

7. Threats About Breaking Up Or Getting Divorced

Unless you truly mean it, talk of a break up should be completely off limits. "[They] can evoke fear of abandonment," NYC-based dating expert Rori Sassoon tells Bustle. "You should never bring it to that level unless you are serious about it."

8. Any Disagreements That Feel Abusive

If you or your partner end up getting abusive during an argument, it's time to call things quits. "There are some true deal breakers. Abuse is one," Dow says. Regardless of what type of abuse it is — emotional, physical, etc. — look after yourself and get help ASAP.

While some degree of jealousy is understandable in a relationship, take note if it seems to be getting out of hand. "Jealousy shuts down open and authentic communication on both ends," Sassoon says. If you two can't make each other feel secure, and it keeps resulting in arguments, it may spell the end for your relationship.

10. Arguments That Lack Any Form Of Compromise

Somethings are nearly impossible to compromise on (see number 11 below). But most arguments should conclude in some form of agreement — especially if the request or solution is perfectly reasonable, Sassoon tells me. If you and your partner consistently can't come to an agreement, it'll definitely become a problem.

11. Disagreements Regarding Whether Or Not To Have Kids

OK, so this is a big one. Unlike where to live, or where to go on vacation, creating a human isn't something that can be met with compromise. That's why, as Los Angeles-based psychologist Yvonne Thomas tells me, disagreeing on whether or not to have a baby can be a huge deal breaker.

While it's normal to have the occasional disagreement, or truly horrible argument, some are just too bad to come back from. It's up to you to move on, but it can often be the best decision.

More like this
Emily Ratajkowski & Pete Davidson's Astrological Compatibility, Revealed
By Nina Kahn
20 Thanksgiving Toast & Speech Ideas That Actually Aren’t Cheesy
By Brandi Neal and Mia Mercado
Are Sagittarius & Sagittarius A Good Match? Astrologers Weigh In
By Kristine Fellizar
Are Sagittarius & Capricorn Compatible In A Relationship? Astrologers Weigh In
By Kristine Fellizar
Get Even More From Bustle — Sign Up For The Newsletter